Syrian refugees in Lebanon who suffer from mental disorders often go without treatment, but some nongovernmental organizations are working to change this. 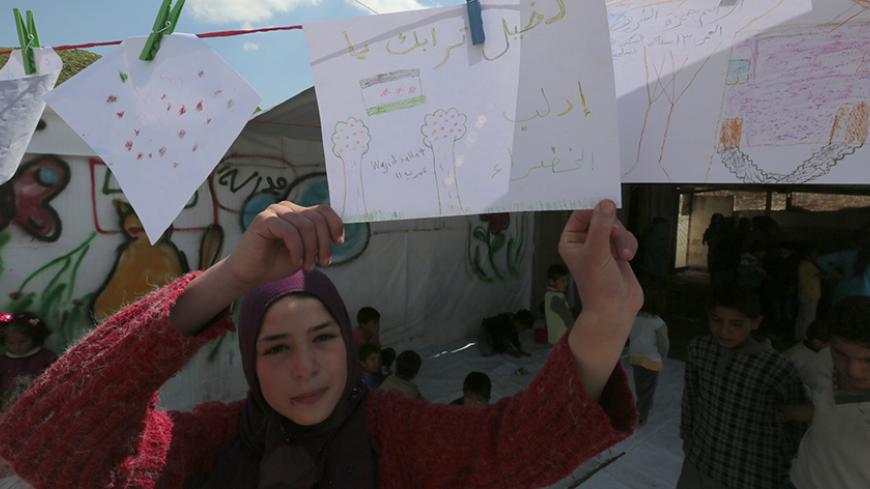 Hunger, thirst, lack of hygiene and lack of medical care are not the only problems for Syrian refugees in Lebanon. They also suffer from depression, anxiety and stress, due not only to their displacement, but to their precarious existence. To help overcome these issues, some organizations, such as Medicins du Monde, the Amel Association and the ADN Center, focus on mental health and meet with the refugees to talk and treat their distress. This is not only good news for the Syrian refugees, who currently number more than 1 million, according to the United Nations refugee agency, UNHCR. It's also good news for Lebanon, where new policies and action toward mental health treatment could be implemented.

In December 2014, nine men and women gathered at 8 a.m. at the ADN Center in Tripoli to listen to speech therapist and psychologist Zanoob El Zohory present a session about acceptable behavior for children and how to get them to overcome anxiety.

The ADN Center is a free psychology clinic created by Lebanese and Syrian aid workers, volunteers and doctors with the help of the Union of Syrian Medical Relief Organizations. Every day, around 15 doctors and trainees who specialize in psychology gather to talk about the best techniques to treat their patients before visiting the nearby camps, such as Hay al-Tanak, al-Minieh, Nabi Youchaa and Markibta. At the camps, they may discover new cases, as well as follow up on ones they have already started to treat.

In al-Minieh camp in northern Tripoli, there are two weekly group sessions — one with the parents to advise them on their children’s issues and another with the children who suffer mostly from nocturnal enuresis (nighttime incontinence) and panic attacks. “It is very important to focus on the refugees’ mental health, because the conflict lasts for too long,” said Dr. Amer Kabakibo, the Syrian-French medical doctor who co-founded the ADN Center.

“They lost everything. They have no future, their situation is very precarious and they don’t have any form of social pyramid anymore,” said Kabakibo. “Here, we try to give them some support on the ground. That’s how we can be effective and avoid tensions between the people — 20% of the refugees in Lebanon just need to talk to someone, 35% of them need a social worker to care about their issues — but there is a real lack of personnel to answer these needs.”

Al-Monitor visited al-Minieh, were there are 35 small camps composed of 50 tents. The social workers divided into three groups that moved between tents, following a very precise plan, to talk with the people and see if anyone needs mental health care. They use a method based on scalable questions, with a range from 0 to 4 for each answer. Al-Monitor met with Mohammad and Daha, both 19 and married three years ago.

After a few questions about Mohammad’s family, studies and current professional situation, Kabakibo’s appraisal is quite optimistic: “They seem comfortable on a psychic level, and they are mentally stable. Mohammad could [potentially] become our social worker on the ground, to help us meet the people and see if there are serious cases.”

In another tent, the parents of four boys and two girls told Al-Monitor that the children had had some panic attacks, and another talked about a 12-year-old boy who struggles with a speech impediment and has trouble remembering vocabulary. “These children are [suitable] candidates for our group therapy sessions, but one of the women we met today absolutely needed medicine to help her cope with her situation,” Kabakibo said. “The problem is that it’s very hard to acquire medicine, and it is the most urgent for us now.”

Medicins du Monde — Doctors of the World — an international organization founded in France in 1980 by 15 French physicians and now active in 60 countries, has been working for the past two years to develop mental health care in Lebanon. It does already exist there, but only as a private service, not for refugees and poor people. “When we started taking care of the refugees three years ago, we were focusing on disability, and we noticed that mental health was one of the main causes of it,” said Zeina Hassan, coordinator of Doctors of the World's mental health program.

“The Ministry of Health started dispatching doctors on the ground to see to people in need for mental health care, then proper infrastructure, which is a sign of the issue’s recognition in Lebanon,” said Hassan. “Although we still need 10 to 15 years to set up an efficient system, the refugees are like a window of opportunities to start developing a new policy and infrastructure. For now, mental health care is mostly private, with around 70 psychiatrists and 100 psychotherapists in the country. It is very limited.”

Hassan recommended efforts to “train general practitioners and to integrate mental health care into the primary care system.” Doctors of the World’s work relies mostly on work by the Amel Association, which set up specialized units in primary health care clinics and also provides training that focuses on medical staff's knowledge and psychological first aid in case of a disaster. “We also need to give this second training to the Syrian community as well, so they can help themselves,” Hassan added.

In Hay el-Salloum, a southern neighborhood of Beirut and one of Amel’s 26 locations in Lebanon, psychologist Chantale Eid and student Fatimah al-Nabaa work 10 hours a week in group support sessions. Nabaa finds potential cases by perusing assessment sheets or meeting patients in primary health care centers or at their homes.

“Mostly women come to the center to talk,” Eid told Al-Monitor. During the session, the issues are pretty clear: exploitation, domestic violence or fear. Rarely, the two women can help some of them by granting them access to safe houses or getting them a visa to leave Lebanon, but “most of them will stay here and find solutions with their husband,” said Eid.

“Group support allows people suffering from the same issues to strengthen their defense mechanisms, help each other and find solutions,” Eid said. “We also have group therapy sessions for specific issues such as suicidal thoughts, heavy anxiety and post-trauma stress. For those who really need psychiatrist attention, we refer them to the International Medical Corps.” She said she regretted they “don’t have enough time to work properly in Hay el-Salloum. That is a very closed society. And we also need to reach out to the men.”

Proper governmental involvement is needed to reach out to traumatized people who have been through war, displacement and misery and to offer help to the rest of the Lebanese population.