What Israel's payoff for Turkish civilians means for Palestinians

Now that Israel has agreed to compensate the families of the Mavi Marmara casualties it calls terrorists, Palestinians are hoping to advance their own claims for compensation. 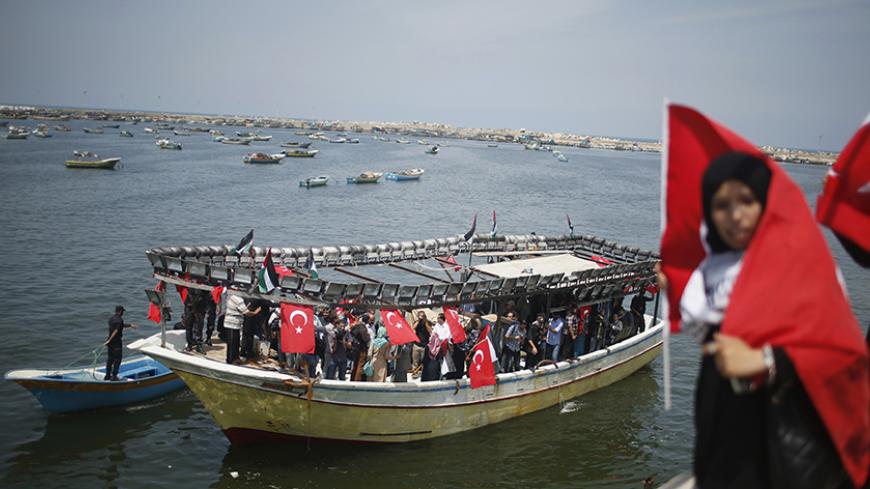 A Palestinian woman holds a Turkish flag as activists ride a boat during a rally ahead of the fourth anniversary of the Mavi Marmara Gaza flotilla incident, at the seaport of Gaza City, May 29, 2014. - REUTERS/Mohammed Salem

As part of its reconciliation agreement with Turkey, Israel made a commitment to pay some $20 million to the families of those hurt during the Mavi Marmara flotilla raid. Inevitably, the clause prompted sharp responses in the Israeli political world. HaBayit HaYehudi leader Naftali Bennett said that he and the other ministers from his party will oppose the agreement because "compensation to the perpetrators of a terrorist act is a dangerous precedent Israel will regret in the future.” Former Minister Gideon Saar wrote on Facebook, “When the Palestinian Authority compensates the families of terrorists, we are outraged, and rightly so. … Creating this kind of precedent by compensating aggressors is not only an assault on our national dignity. It is also a serious strategic error by Israel, whose struggle against terrorism is far from over.”

But Israelis aren’t the only ones infuriated. The agreement to compensate those injured by Israel Defense Forces (IDF) actions, whether they were “terrorist activists,” as they are called in Israel, or “human rights activists,” as they are called in Turkey, has also angered groups in Gaza and the West Bank. For years, human rights organizations have tried to get the Israeli government to take responsibility for harming civilians, but Israel passed a series of laws that prevent Palestinians from suing for damages to body or property.

Soon after the second intifada, the Knesset approved amendments to its civil tort law. In Israel, these amendments were nicknamed the “intifada law,” though human rights activists prefer to call them “Israel’s defensive wall.” Amendment 4, which was passed immediately after Operation Defensive Shield, was intended to halt a tidal wave of claims by Palestinians who suffered as a result of IDF activities.

“We are not even talking about people who conducted terrorist attacks in Israel. We are talking about the most basic and logical thing imaginable: compensating civilians who were injured by Israeli fire over the years,” said Mustafa Ariq, a civil rights activist in the Gaza Strip. “We cooperated with groups in Israel like Adalah to prompt Israel to recognize its responsibility to civilians who were killed or injured,” he added. According to him, not only are there thousands of civilians in the Gaza Strip who suffered injuries as a direct result of IDF assaults, Gaza is also full of people who have paid a steep price over the years for the illogical and inhumane closure that Israel imposed on the territory.

Attorney Fadi Qawasmeh of Hebron, who represents Palestinians in Israeli courts, told Al-Monitor that the changes that Israel made to its civil tort laws exempts it from paying compensation even in cases where the injured parties were innocent civilians uninvolved in any aggressive action. The law determines that Israel is not responsible for damages caused to the subjects of a hostile state.

Nine human rights organizations appealed to the Supreme Court to annul the amendment. In late 2006, the court accepted some of their arguments, ruling that Palestinians who are not members of terrorist organizations could sue the state. Even after the court's ruling, however, the government continued to deter these kinds of suits. In July 2012, the Knesset approved Amendment 8 to the law. It established a series of obstacles that effectively make it impossible for Palestinians to sue Israel for damages.

To highlight the impact of this law, Qawasmeh recalled the recent killing of 15-year-old Palestinian Mahmoud Badran on Highway 443. The IDF admitted that the boy had not committed any crime, and the soldiers who killed him were interrogated by the military police. “I can already tell you that the family of the boy, who was killed by accident, will not receive any compensation … and the IDF [already] announced that he was shot by mistake,” he said. According to him, Israel has barricaded itself with laws and amendments to its tort laws that prevent Palestinians from suing it for damages under almost any circumstances.

According to Qadura Fares, a senior member of the Fatah movement, Israel’s agreement to compensate those injured on the Turkish flotilla is further evidence that Israel only understands force. He claims that the current agreement, reached after a six-year crisis in Israel’s relationship with Turkey, provides the Palestinians with ideas on how they should act to make Israel take responsibility for its actions. Fares added that the matter requires in-depth study and scrupulous investigation.

While this legal "wall" makes it impossible to file lawsuits in Israeli courts, international courts are an entirely different story. Qawasmeh explained that citizens of foreign countries can sue for damages in their own countries, just as Israeli-American victims of terrorism filed suit against Hamas over actions for which the organization claimed responsibility. The suit also named the branch of the French Credit Lyonnais bank where Hamas has an account.

The Palestinians realize that the generous compensation that Israel agreed to give those harmed in the Marmara incident was the result of lengthy political bargaining on an agreement that balances the interests of two countries facing an international crisis. Nevertheless, they also believe that this precedent opens a door for Palestinian claims. So far, lawyers representing Palestinians in Israeli courts have attempted to find loopholes in existing tort law, but to no avail. Now that Israel is to compensate people that it defines as terrorists, lawyers believe that a precedent has been set that will help them in international courts.

“It will be interesting to see how Israel handles these claims and how it explains why it refuses to compensate Palestinians after already compensating Turks,” said Fares. “If you paid $21 million to the Turks, how much money will you have to pay us? We'll have to wait and see.”