Why Netanyahu's Africa visit is worth the cost

Those criticizing the cost of Prime Minister Benjamin Netanyahu's visit to Africa are missing the point; it could open doors to African markets and strengthen Israel both economically and diplomatically. 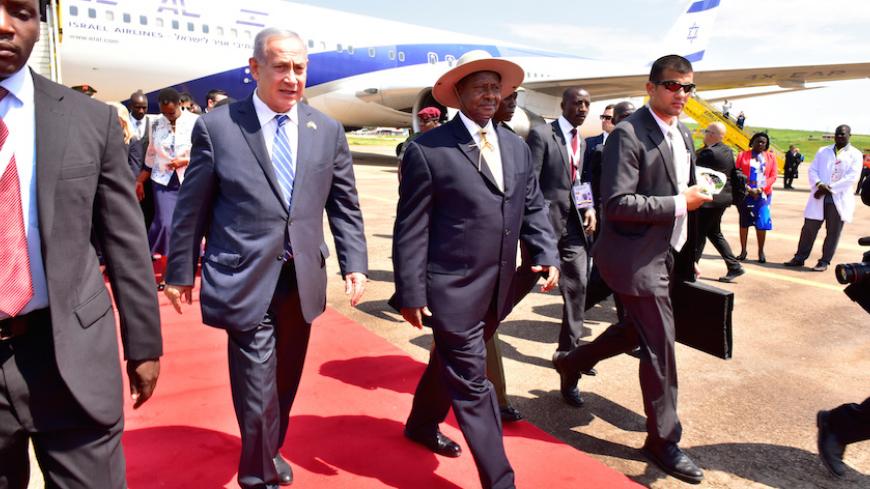 Prime Minister Benjamin Netanyahu's opponents and rivals have not missed the chance to criticize and ridicule his extravagant and wasteful visit to Africa.

Netanyahu's visit started July 4 when his entourage landed in Uganda on the 40th anniversary of the hostage rescue operation that freed the passengers of an Air France flight that was hijacked and taken to the Ugandan town of Entebbe in 1976. Netanyahu's own brother Yoni, commander of the Matkal commando unit, was killed in the rescue operation. The prime minister's official visit to four African countries — Uganda, Rwanda, Kenya and Ethiopia — is scheduled to end July 8. The visit was intended to bolster economic and diplomatic ties between Israel and Africa. Just last week, the Israeli government approved a program worth 50 million shekels ($13 million) to advance this goal.

Thousands of sharp words have been written over the past few days on one of the most expensive overseas visits by an Israeli prime minister. The authors detailed the steep costs of security, leased aircraft, a safari, as well as costs associated with the entourage. According to some media sources, the total price tag of the visit came to 28 million shekels ($7 million). The prime minister's office responded that the actual cost was 12.5 million shekels ($3.2 million).

Meretz Chair Zehava Gal-On claimed that the trip "broke records for its absurdity." She called it "an extravagant festival that has nothing to do with developing relations with Africa. While Netanyahu likes bombastic ceremonies, which legitimize his leadership, he would do well to reduce the cost of this visit to something more reasonable and invest the remainder in strengthening economic ties and cooperation with the African continent."

The Movement for the Quality of Government in Israel joined the critics' celebration, demanding that the prime minister's office release a detailed timetable with costs for the visit.

All this criticism of the visit's cost misses the trip's historical significance for Israel's foreign relations, economy and even its national ethos. The ceremony in Entebbe, for one, brought its audience back to one of the most powerful and important moments in the country's history.

It is difficult to ignore the fact that the prime minister's family ties to the operation caused Netanyahu's regular critics to react cynically to the ceremony and attack Netanyahu again, almost automatically.

At the end of the ceremony, which was in no way extravagant or overstated, Netanyahu met with seven African leaders from Uganda, Ethiopia, Kenya, Rwanda, South Sudan, Tanzania and Zambia. By signing a joint regional declaration on the war against terrorism, they bestowed an important diplomatic dimension to this visit, especially now, when Israel is hardly the most popular country in the international community.

Furthermore, Netanyahu was accompanied by a delegation of several dozen businesspeople, selected by the Israel Export Institute. This could be the opening salvo in the upgrading of economic relations between Israel and Africa, given the enormous potential of such ties. In fact, by the second day of the visit, it was reported that Israel and Kenya would be signing a new trade and investment agreement. The office of Kenyan President Uhuru Kenyatta reported that during the visit, Kenyatta and Netanyahu will either sign or reauthorize agreements signifying that the relationship between the two countries has entered a new stage of close cooperation.

The last prime minister to visit the African continent was Yitzhak Rabin in the early 1990s. It has been more than 20 years since then, over which time relations between Israel and Africa were neglected due to a lack of interest, even though African markets could have offered Israel great commercial opportunities.

On Monday evening, Netanyahu updated his Facebook followers about his experiences on the visit so far and about his meeting with the African leaders. He said, "We spoke about strengthening the relationship between us and about regional and international cooperation in all areas, including cyber security, data collection, advancing new technologies and development. This summit meeting will be a milestone as we continue to strengthen relations with these and many other countries in Africa. We will develop our countries together and lead them to the future. Israel is returning to Africa, and Africa is returning to Israel!"

While Netanyahu has a tendency to exaggerate and lionize his actions, and while he doesn't always stand behind his statements, in this particular case, even the statements, intentions and mood resulting from this visit have enormous value.

According to figures from the Israel-Africa Chamber of Commerce, Israel's annual exports to Africa stood at $1 billion in 2015. Economic growth in Africa stood at 5.7% that year, much higher than the global growth rate, which stood at 3.8%. Israel's exports centered on medicine, agriculture and communications. According to the chairman of the Africa-Israel Chamber of Commerce, Nisu Betzalel, who assumed the position in June 2016, "The potential exists to double this economic activity."

Ayo Salami, a world authority on the African economy who visited Israel as a host of the Israel-Africa Chamber of Commerce last February in an effort to promote cooperation, gave a comprehensive summary of Africa's untapped economic potential. He said that the changes underway in Africa over the past two decades are evolutionary, not revolutionary. Whereas revolutions were behind extensive changes in other regions of the world, including economic changes, regimes that experienced crises and periods of economic stagnation in Africa were the same regimes that eventually led their countries out of these situations.

That is why Netanyahu's rivals should put their criticism about the cost of this trip aside. They should focus on the enormous value of this visit to Africa, regardless of whether it costs 12.5 million shekels or 28 million. If important deals start to take shape there, then the cost of the trip is insignificant.