Can Iraq overcome its land mine infestation?

Efforts to rid Iraqi Kurdistan of millions of land mines are being hampered by financial problems, corruption and the Islamic State's tenacity in planting more mines. 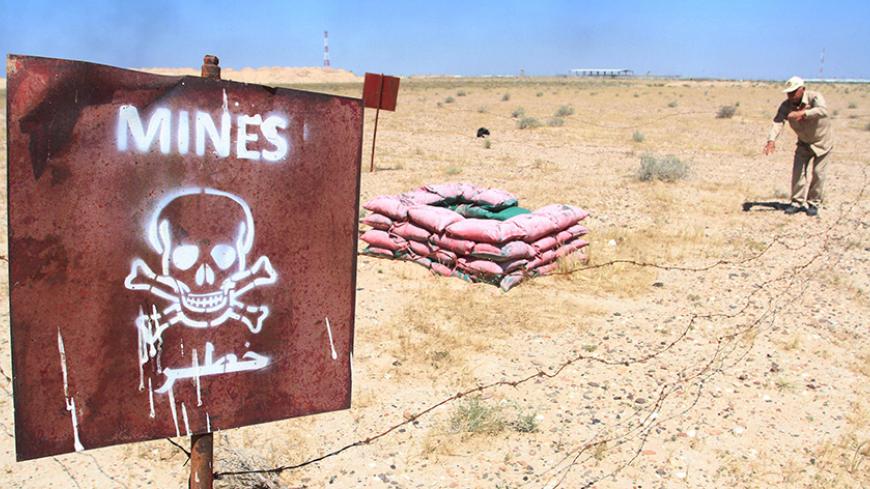 ERBIL, Iraq — Iraq is one of the worst-off countries in the world in terms of minefield and projectile pollution, with 25 million land mines and other unexploded ordnances scattered across the country.​ The concentration is especially dense in Iraqi Kurdistan, and efforts to clear the land are meeting with a number of obstacles.

“At the current pace, the estimated time required for the de-mining action in Kurdistan is 100 years," estimated a series of reports by Shamal Adel Slim, a researcher who specializes in crimes against the Kurds.

Some 1.5 billion square meters (about 580 square miles) of land in Iraq contain mines, according to a 2015 US State Department report on surveys conducted in 2006 and 2011.

The Kurdistan Regional Government (KRG) estimates 314 million square meters (121 square miles) of land are contaminated across that region. Most of these unexploded mines are the result of the Iran-Iraq War, according to the US State Department, but more accumulated during the 1990-1991 armed conflict and the 2003 invasion into Iraq by the US-led coalition. The Islamic State (IS) and other parties continue to add to the mine count today.

Jalal Jamal Hussein, the general director of the Iraqi Kurdistan Mine Action Agency (IKMAA), has said 467 minefields are yet to be cleared.

Agency Chairman Mohamed Ahmed told Al-Monitor there are hundreds of mines scattered across Kurdistan in hundreds of new fields mined by IS. These mines pose a real threat to the lives of citizens in those areas and restrict their activity. One main problem is that a financial crisis, which is worsening by the day, is restricting the de-mining action, NRT TV reported July 17.

Also, a de-mining technician told Al-Monitor on condition of anonymity that the delay in removing mines is partly due to rampant corruption in awarding contracts. The technician said some companies have not yet met their obligations. Ahmed confirmed this, saying, "Some bad companies th​at were contracted in 2009, 2010 and 2011 did not carry out their work, knowing that they had signed a one-year contract. At the time, there was no financial crisis, but the companies disappeared and failed to fulfill their commitments.” The agency is taking legal action against these companies, he said.

Ahmed said seven companies shut their doors in Erbil, and money problems have stopped IKMAA at two different levels. First, the agency had 36 teams working across the Kurdistan Region, with the understanding that the workers would receive a monthly salary and the necessary equipment from the KRG. When the funding dried up, so did the work. Second, the specialized companies were operating through tenders, and IKMAA hasn't issued any tenders since 2015 because of the money crisis. Therefore, 99% of IKMAA's work has stopped at a time when IS mining activity is in full swing.

Eyewitnesses from the area told Al-Monitor that during the past three weeks there have been mining operations in the grazing lands of Kurdistan and a lot of livestock and citizens have been affected by the explosion of two recently planted mines.

According to the Kurdistan Ministry of Peshmerga, 80 people in the region have been killed or wounded by mines in battles against IS since 2014. In addition to IS’ efforts to mine battlefields, there are reports that Iran's Islamic Revolutionary Guard Corps is also mining border areas with Kurdistan because of escalated fighting with the Kurdistan Democratic Party of Iran after the Revolutionary Guard established a military base at Mount Surin, 500 meters (almost 547 yards) within the Iraqi territory of the region.

Yet Ahmed is optimistic about the de-mining. He told Al-Monitor that there are six international organizations now operating in various areas across Kurdistan and other organizations are being recruited to join the effort. According to a report by the Speda channel, a French team recently visited Kurdistan to train competent de-mining teams and provide them with essential supplies.

Observers say most of those organizations are interested in the fields that have been recently mined by IS, as this would allow displaced people to return to the areas that have been liberated from IS.

According to an April 4 statement to Bas newspaper by Ahmed Fattah, media manager of the Sulaimaniyah branch of the General Directorate of Mine Action, more than half of Iraq's mine fields have yet to be de-mined. Fattah said the number of victims killed or wounded by land mines in Iraq since 1991 exceeds 14,000. He told Al-Monitor that only 122 people out of these victims are professionals, while the rest are innocent citizens.