How the IRGC is trying to tighten its grip on Rouhani

A controversial bill on eligibility for appointment to “sensitive" positions would give the IRGC's Intelligence Organization vetting authority parallel with that of Iran's Intelligence Ministry. 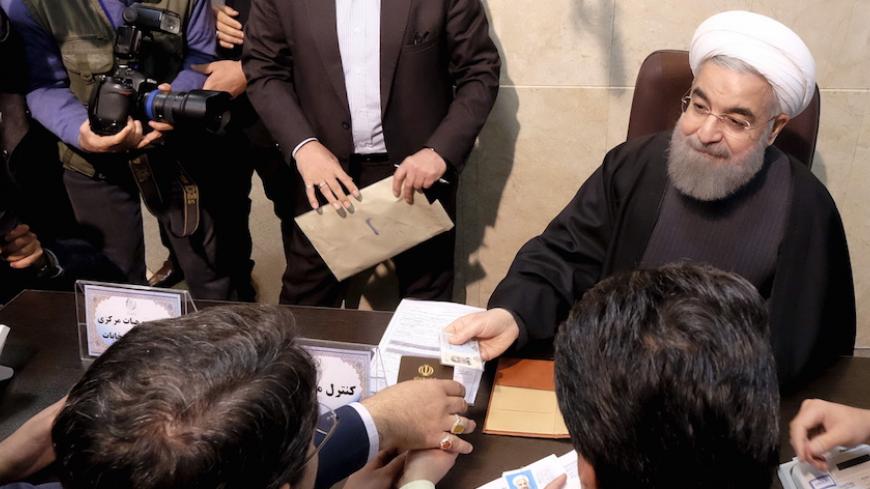 Iranian President Hassan Rouhani registers for February's election of the Assembly of Experts, the clerical body that chooses the supreme leader, at the Interior Ministry in Tehran, Dec. 21, 2015. - REUTERS/Raheb Homavandi/TIMA

A bill passed in the Iranian parliament outlining requirements for “how to hire individuals for sensitive positions” has sparked an outcry within the government and among lawyers and political analysts. Critics are incensed not only by the content of the bill, but also how it was passed. The text was approved May 24, in the final days of the previous, conservative-dominated legislature, but the Guardian Council, citing legal issues, rejected the measure June 12 and sent it back to the newly sworn in parliament for revisions on multiple clauses.

The bill banned people from 11 groups from appointment to sensitive positions. Among them are individuals who hold dual citizenship, have spied for foreigners or are suspected of having done so or are in contact with foreign nationals blacklisted by Iran's security and intelligence organizations.

The measure also obliged executive bodies to vet applicants for sensitive positions not only through the judiciary and the Intelligence Ministry but also the Intelligence Organization of the Islamic Revolutionary Guard Corps (IRGC). The bill exempted from the proposed regulations entities operating under the supervision of Supreme Leader Ayatollah Ali Khamenei and the judiciary as well as positions that constitutionally require specific procedures for appointment.

Controversy over dual nationals holding key posts began in 2011 after Mahmoud Reza Khavari, then-head of Melli Bank, fled to Canada after being implicated in a massive, 30 trillion rial ($1 billion) embezzlement scandal. Abbas Abdi, an Iranian political analyst, said cases such as Khavari's are the driving force behind such bills being passed in parliament.

“A person who holds citizenship of another country has sworn to serve the interests of that country,” Abdi told Al-Monitor. “Under such circumstances, placing him in a sensitive position that also requires serving the interests of the principal country would naturally be difficult.” He added, however, “Even if Khavari did not have [Canadian] citizenship, he could have gone and bought it. Did [notorious suspected embezzler] Babak Zanjani have dual citizenship when he took his actions?”

Of note, Iran does not recognize dual citizenship. Moreover, based on Article 41 of the constitution, authorities can revoke the citizenship of Iranians who obtain citizenship in another country. The article has never been invoked, however, given that millions of Iranians have a second nationality. In recent years, this issue has become a hot topic in the political arena because of the dual nationality of some Iranian officials and officials' children.

Indeed, in January 2015, 13 parliamentarians sent a letter to President Hassan Rouhani, advising him not to employ people with dual citizenship in government posts. The lawmakers did not mention any names, but there was speculation that the intended target had been Mohammad Nahavandian, Rouhani's chief of staff, who had reportedly received a green card in 1993 while living in the United States. It is unclear whether Nahavandian still holds permanent US residency.

Al-Monitor spoke to Mohammad Saleh Nikbakht, a prominent Iranian lawyer, about the controversial bill. He referred to the case of a detained Iranian American who no longer wanted his Iranian citizenship, saying, “He can’t [do that unilaterally]. In fact, an individual can only be stripped of his Iranian citizenship if he [specifically] states this to the relevant authorities in Iran. For instance, Khavari, who was one of the government’s trusted advisers during [former President] Mahmoud Ahmadinejad’s era, would only be stripped of his citizenship if he formally declared his wish to have his citizenship revoked to Iran’s Foreign Ministry.”

The listing of the IRGC as one of three organs that must vet appointees to sensitive positions, alongside the judiciary and the Intelligence Ministry, is among the other key criticisms directed at the parliamentary bill. Nikbakht told Al-Monitor, “Iran’s Constitution accepts the formation of a body known as the IRGC, and the Intelligence Organization is one of the subgroups of this body. The ratification of this bill in a way limits the powers of the government, meaning that in addition to acquiring permission from other organizations, another intelligence entity that has no links to the government in terms of duties can now play a role [in the hiring of people]. Nonetheless, the [IRGC Intelligence] Organization does have a legal mandate and was for instance, in relation to the arrests after the 2009 presidential election, in charge of pursuing misconduct.”

According to Nikbakht, the involvement of the IRGC’s Intelligence Organization in the hiring process for some government positions could lead to conflicts in the management of the country, given that it is a military organization that operates under the supervision of the supreme leader. He told Al-Monitor, “It would have been better if the [IRGC Intelligence] Organization would transfer its intelligence on individuals through the Intelligence Ministry instead of acting independently, since intelligence bodies in all countries work in solidarity and their output comes from a single source.”

Considering that the bill bans individuals suspected of spying from holding sensitive positions, critics say it contradicts the principle of the presumption of innocence as well as the right to employment. On this, Hamedani said, “It is possible that a person will be accused of something, but errors are made in verifying his credentials because his trial may take a long time. Suppose that we have a suspect with a security file, and suppose that his file will take two years to be processed. In such a situation, this person cannot be employed anywhere [during this time]. Based on the constitution, this violates the right to employment.”

Abdi believes that the previous, conservative-dominated parliament’s passage of the bill in its final days indicates a lack of attention to rules of the game.

“This bill is aimed at restricting the employment of those individuals who can be beneficial to the new government,” Abdi said. “With the objections made by the Guardian Council, the bill will naturally have to be reviewed again in parliament, and it will either be dropped quietly or more changes will be made to it. Of course, the current parliament can also come up with ways to neutralize such bills. In the end, I don’t think this bill will have too much of an impact.”