Are Iran, West on collision course over missiles?

As Iran makes strides in the development of navigation, guidance and missile systems, the West should consider why Tehran is making such a push. 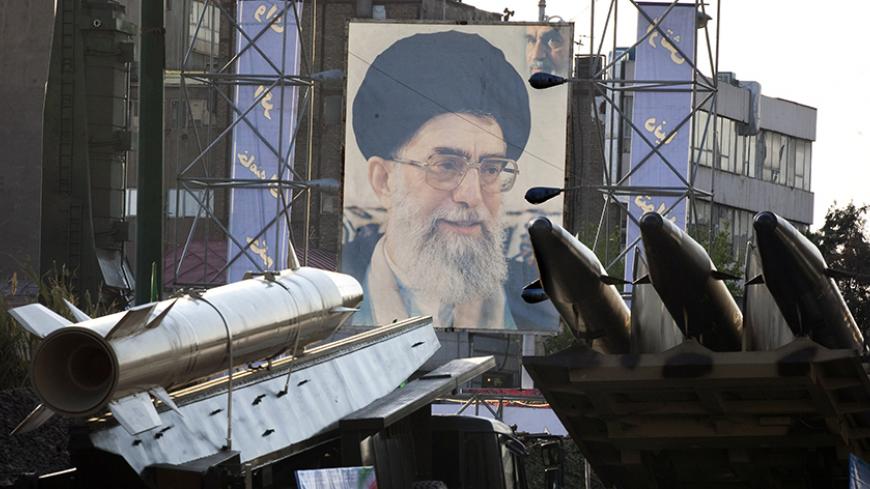 TEHRAN, Iran — Iran’s defense minister, Brig. Gen. Hossein Dehghan, unveiled new military equipment during a June 1 event at the Defense Ministry-affiliated Malek Ashtar University of Technology. The most significant of these products was Hoda, the transmitter for a local positioning system (LPS). Dehghan said that Malek Ashtar had succeeded in building the 1 megawatt, half-cycle transmitter in the first phase of designing the system. Five ground stations equipped with the systems are expected to be built in different regions of the country. These will serve as stations for positioning guided missiles as well as unmanned aerial vehicles (UAVs), warplanes and other military aircraft.

Iran is trying to develop an alternative to satellite positioning systems, in particular the Global Positioning System (GPS), to guide military hardware during battle. Within Iran, GPS systems have a margin of error of about 30 meters (98 feet), so the Islamic Republic is trying to decrease the distance to about a meter (some 3 feet) by improving its homegrown LPS system.

The current Iranian LPS has an accuracy of a few centimeters within a radius of 30 kilometers (19 miles) and an accuracy of about a meter within a radius of 150 kilometers (93 miles). A few years ago, Iran developed a similar program, the Persian Gulf Network Beacon that focuses on the Persian Gulf and the Sea of Oman to assist the navy with navigation of its aerial fleet and positioning.

The Iranian LPS is also designed to guide long-range drones, including combat and reconnaissance UAVs. Although this navigation system is outdated — many Western countries began developing LPS in the 1950s — it addresses the country's immediate needs in terms of positioning and thus can be considered to have been an important step forward.

At present, however, Iran's missile program suffers from three main weaknesses. It has issues of accuracy and guidance stemming from not utilizing satellites. As a result, key military targets cannot be targeted from afar. Moreover, there is the matter of destructive power. Iran’s most powerful missiles have warheads that are only slightly more destructive than laser-guided bombs. Thus, absent nuclear or chemical warheads, these missiles lack a high destructive capability.

At this stage, utilization of navigation and positioning systems is vital in Iran’s efforts to develop its missiles and UAVs. Short-range ballistic missiles — such as the Persian Gulf, Fateh A-110 and Hormuz — can be guided with a high degree of accuracy optically and via radio. Moreover, considering their payloads, these weapons have a relatively high destructive capability. Indeed, these pieces of military hardware are Iran’s most important weapons against the fleets and military bases of the United States and its Arab allies in the Persian Gulf region and the Strait of Hormuz. Iran’s medium-range ballistic missiles, with ranges of 1,300 to 2,300 kilometers (808-1,430 miles), are less accurate, however, due to exceeding radio range.

Iranian officials are well aware of this problem, and President Hassan Rouhani and his Defense Ministry have been doing their utmost to solve it. During the past three years, the Defense Ministry has designed guided warheads and unveiled optical warheads. Furthermore, there were reports in June of the initial testing of the Simorgh space-launch vehicle in the deserts of Semnan, in central Iran, in Rouhani's presence. Analysts disagree on whether Iran had tried to utilize this North Korean missile platform for military purposes during the presidency of Mahmoud Ahmadinejad (2005-13). It is clear, however, that the Rouhani administration is not looking to expand the range of Iran’s ballistic missiles, but is planning to use the Simorgh program for space and reconnaissance purposes.

The big picture is that the Iranian missile program is becoming more complex. On the one hand, now that Iran’s nuclear program is no longer a source of international concern, Western countries and Iran’s regional rivals are increasing pressure on the Islamic Republic over its missile program. On the other hand, there is now a domestic dialogue and a deep dialectic over the missile program, including how and to what degree it should be expanded. Although Iranian political and military elites arrived at a clear consensus that the country’s missile capabilities must be maintained, disagreement remains over whether missile ranges need to be expanded or accuracy and guidance need to be improved. It appears that the Rouhani administration prefers the latter.

In addition, during the past year, there has been news of Iran using long-range combat UAVs in Syria. Images that have surfaced reveal these UAVs to be of the Shahed-129 type, guided in operations in northern Aleppo from the Konarak military base, near the Makran coast. The images, coupled with the announcement that a radio LPS station has been set up in Chabahar, strengthen speculation that the southern part of Iran’s Sistan and Baluchestan province has become the center for guiding combat UAVs.

Iran has invested heavily in its missile and space programs and is making every effort to make them more effective and operational, including through the use of older technology, such as LPS. With international concern over Iran’s missile program growing as it expands, however, one must consider what Iran can depend on to protect itself in the world’s most heavily armed region. Its outdated aerial and naval fleets, in addition to its huge but worn out ground forces, cannot be considered the solution. Rather, it is Iran's missile program that provides it relative deterrence.

At the end of the day, one should also ask, would the Islamic Republic have sought to expand its ballistic missile program had the international community not refused to sell it conventional military equipment, including conventional warplanes? It appears that the missile program, which has become one of the main points of contention between Iran and the West, will soon — like the confrontation over Iran’s nuclear program — become the most important political challenge for the two sides.