Why is Hamas giving away government-owned land?

While Hamas has begun distributing government-owned land as payment to employees of its disputed government, challenges about the project's legitimacy continue. 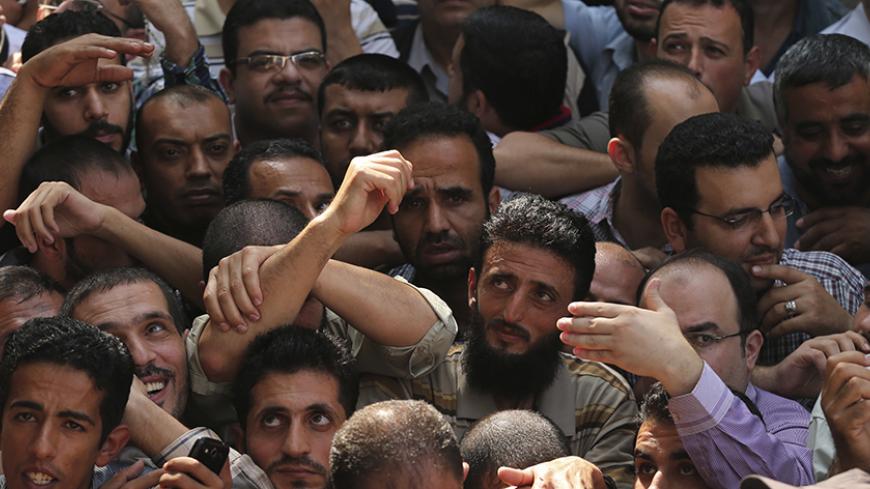 GAZA CITY, Gaza Strip — Controversy has not stopped the Land Authority in the Gaza Strip from proceeding with the second phase of a scheme to hand government-owned lands to Hamas government employees who have not been paid since 2013. Registration for the project's first phase began Dec. 14, and the distribution process took place on June 1-9. In the meantime, registration for phase two began in mid-May, with distribution yet to get underway.

This project was developed as Hamas continued to struggle with a crippling financial crisis, and the Palestinian consensus government, formed in 2014, refused to recognize Hamas government employees in Gaza as civil servants and therefore pay them. Hamas' Change and Reform Bloc from the Palestinian Legislative Council introduced the scheme on March 9, 2015. On Nov. 3, the consensus government weighed in, declaring the distribution of government-owned lands to employees illegal. According to the government in Ramallah, any such act is null and void, does not convey any rights and represents a violation of state property and lands.

In the first phase of the program, 49 plots across Gaza were given to government employees. The size of the parcel received was determined by how much a worker was owed in back pay and the land price per square meter, which varied depending on location.

Jumaa Hassan, a Rafah resident who works in security for the Hamas government, was given a tract of 168 square meters (1,800 square feet) as compensation for the 95,000 shekels ($24,000) owed to him. “I am satisfied with the plot handover as compensation for the salary I thought I would never receive,” Hassan told Al-Monitor. “Today, I can sell it, like some of my colleagues did, and get my past due wages in cash, which I have not received for years.”

Mohammed al-Nazli, a resident of Gaza City who works at the Ministry of Communications and Information Technology, refused to take part in the project. He told Al-Monitor that the scheme promotes divisiveness and further separates Gaza from the West Bank given the disagreement between Hamas and the consensus government over the land distribution project.

“My [unpaid] salary is worth $5,000, which is not enough for me to get a 30-square-meter [323-square-foot] plot,” Nazli said. “I am convinced that we are going through dark times. The distribution of land at this stage, in the absence of Palestinian national unity and in light of the national divide, is contrary to the laws and norms of the state of Palestine.”

Nazli said that there is no guarantee that the land will remain the property of the employees in the future. “As an employee, I look forward to receiving my salary and past wages, to be able to pay my debts and have a decent life similar to any government employee,” he said.

Ibrahim Radwan, the chairman of the Land Authority and Supreme Committee for Land, told Al-Monitor that the project — which the Land Authority calls the Low-Income Earners Housing Project — is based on laws granting the Supreme Committee for Land the authority to dispose of government property, that is, Law No. 2 of 2015, which is an amendment of Law No. 6 of 1942 on government lands.

“It is not the first time that a ruling party in Gaza has disposed of government-owned lands,” Radwan said. “It has always been the case in the Gaza Strip, starting with the British Mandate, Egyptian rule, Israeli occupation and up to the Palestinian Authority.”

Radwan said that the amount of land distributed during the first phase of the project amounted to 1,500 dunams (371 acres). Some 40,000 Gaza government employees are expected to be paid with land. Nearly 13,000 have already received allotments, Radwan claimed.

He noted that according to the mechanism established for implementing the project, plots slated to be used for housing collectives are registered in the names of multiple employees, with a single plot ranging in size from 500 to 1,000 square meters and owned by 10-20 employees.

Lawyer Bakr Turkmani told Al-Monitor that Palestinian President Mahmoud Abbas is the only party with the authority to issue decisions to privatize government-owned lands in the public interest.

“According to public property and land laws applicable in Palestine, public lands are state-owned properties and may not be subject to any act whether by takeover or privatization unless by virtue of a law,” Turkmani said. “The president of the state, head of the government or any party authorized by them is the sole competent authority in this regard.”

Turkmani added, “We recognize that the Hamas employees in Gaza have the right to be paid their salaries and dues,” but said, “The problem of accumulated unpaid financial dues will re-emerge.” As soon as the affected employees receive land, their unpaid salaries will begin accruing anew.

“Moreover,” said Turkmani, “it is possible that a number of land middlemen and traders will try to exploit the situation of these employees and offer to buy their lands at low prices.”

Despite the objections and legal questions surrounding the distribution scheme, the process remains ongoing.