The Dutch parliament registered its opposition ahead of a July 14 hearing on the issue. 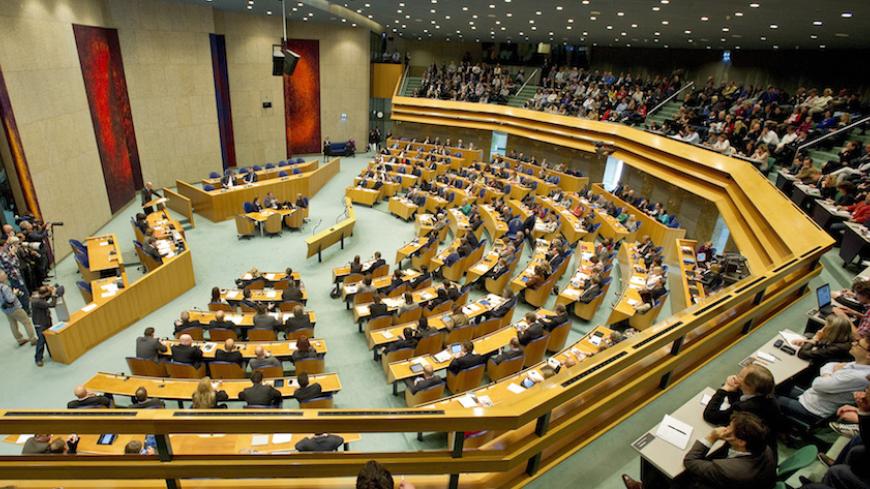 An overview of the Dutch parliament during a debate about the government's resignation caused by a crisis over budget cuts, in The Hague, April 24, 2012.

European lawmakers are putting Congress on notice that a bill to allow 9/11 victims to sue Saudi Arabia could inadvertently harm relations with some of America’s closest allies across the Atlantic.

The Dutch parliament wrote to House lawmakers ahead of a July 14 hearing to warn them that the Justice Against Sponsors of Terrorism Act (JASTA) would represent a “gross and unwarranted breach of Dutch sovereignty” that could result in “astronomical damages.” The July 12 letter obtained by Al-Monitor endorses the Obama administration’s opposition to the bill, and asks that Congress take into account a July 6 motion from the Dutch House of Representatives calling the bill “unacceptable.”

“To the extent the State Department enunciates concerns about JASTA’s adverse impact upon sovereign immunity of important US allies,” the letter states, “the enclosed binding motion associates the Dutch parliament with the expression of those concerns.”

The motion is particularly noteworthy because the Netherlands can hardly be accused of any kind of knee-jerk alignment with Saudi Arabia. The Dutch parliament voted to ban arms exports to Riyadh in March out of concern over Saudi actions in Yemen, making the Netherlands the first country to adopt a motion by the European Parliament in February urging an EU-wide Saudi arms embargo.

The July 12 letter was signed by Labor Party member Jeroen Recourt, who also initiated the binding motion opposing the bill. It is addressed to Reps. Trent Franks, R-Ariz., and Steven Cohen, D-Tenn., whose Judiciary Committee subpanel on the Constitution and Civil Rights is scheduled to hold a hearing on the bill following its unanimous passage by the Senate in May.

“The House Judiciary Committee believes that it should hear from all sides on the merits of the legislation before advancing it for consideration by the whole House of Representatives,” Franks and full committee Chairman Bob Goodlatte, R-Va., said in a statement ahead of the hearing. “We look forward to hearing from experts and members of the executive branch on the critical foreign policy issues at play with this legislation.”

Assistant Secretary of State for Near Eastern Affairs Anne Patterson and State Department legal adviser Brian Egan are scheduled to testify against the bill, while lawyers for terrorism victims’ families will argue the other side. US officials have warned that weakening the sovereign immunity clause that guides international relations could open up both US and key allies such as Israel to retaliatory lawsuits for their own actions.

Saudi Arabia for its part denies any involvement in the Sept. 11, 2001, attacks. Riyadh strongly objects to the JASTA bill, and has warned that it would sell off $750 billion worth of American assets if it passes.

The Netherlands is believed to be the first European nation to formally weigh in on the bill, but other countries are also debating the merits of getting involved. British parliamentarian Tom Tugendhat, a former adviser to the head of the British armed forces, warned in a June 5 op-ed that the bill could have “serious unintended consequences for Britain” if, for example, victims of terrorism were to sue over the country’s past tolerance for radical Islamist preachers.

The specific concerns that fueled the Dutch parliamentary action aren’t clear, but it’s possible that the failure to apprehend a terrorism suspect who went on to kill two Americans and 13 others at the Brussels airport in March may have played a part. The Dutch Embassy in Washington did not immediately respond to a request for comment.

The bill, as passed by the Senate, would allow a judge to stay action against a foreign state if the secretary of state certifies that the United States is in “good faith discussions” with that nation over resolution of terrorism-related claims. The bill also prohibits suing foreign nations for “mere negligence,” but those restrictions haven’t convinced skeptics.

“The act would expose the British government to the possibility of revealing the secrets of intelligence operations in open court, or paying damages over alleged failures to prevent terrorist attacks,” Tugendhat wrote in The Telegraph. “Either outcome would put the special relationship under severe strain.”