The EU’s Operation Sophia has so far failed to stop the smuggling of people from Africa to Europe, as the problem lies in Libya's tenuous government. 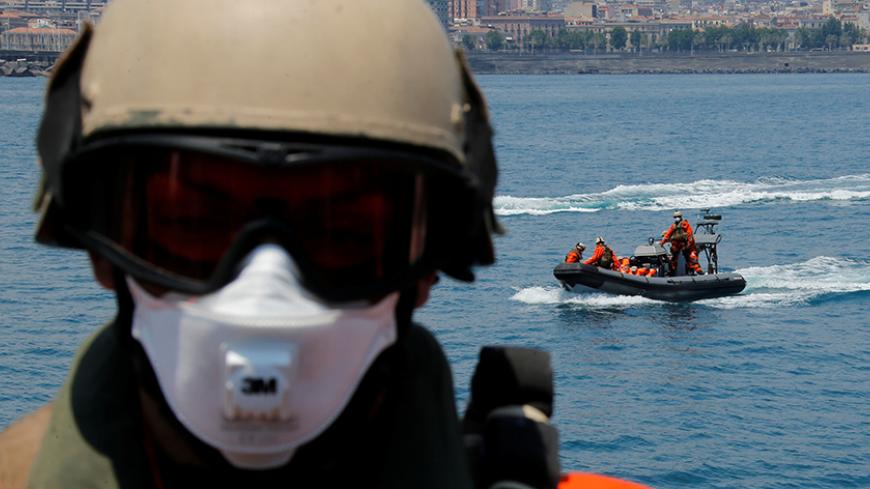 German navy soldiers take part in a drill for a search and rescue operation near the Sicilian port city of Catania, Italy, July 4, 2015. - REUTERS/Fabrizio Bensch

The European Union is taking steps to beef up its struggling efforts against human smuggling and trafficking from Libya, but until the country is politically stable, the changes aren't likely to be sufficient.

The EU naval operation launched in September, called Operation Sophia, is designed to combat people smuggling humans from Libya and surrounding countries to European shores, mainly Italy. Its main stated aim is to "board, search, seize and divert vessels suspected of being used for human smuggling or trafficking on the high seas, in line with international law," as stated on the EU Council website.

However, instead of successfully targeting the smugglers and their networks, the whole operation has turned into a search and rescue effort. More than 50 suspected smugglers had been arrested as of June — but they were mainly low-level operatives, not the real ringleaders. Some 80 wooden boats have been confiscated since the operation was launched, but the smugglers have since switched to using more dangerous rubber dinghies.

As the weather is improving with summer, thousands of people are expected to try to reach Italian shores. On just one day recently, June 23, the Italian coast guard rescued 4,500 migrants from dozens of boats, many coming from Libya. According to the International Organization for Migration, as of June, more than 18,000 migrants and refugees had reached Italy so far this year, compared with about 10,000 in the same period in 2015.

A British parliamentary report published in May called Operation Sophia a failure. The report acknowledges that the operations have become mostly rescue work, succeeding in saving some 9,000 migrants.

The main reason the mission has failed is that there is no strong central government in Libya with effective coast guard forces capable of patrolling the country's 1,900 kilometers (1,180 miles) of ocean shoreline. Libya's ambassador to Italy, Ahmed Safar, was quoted May 31 by London's The Telegraph as saying that the internationally recognized Government of National Accord in Tripoli does not exercise "full control over certain territories," referring to parts of Libya that are under the control of militias, including Sirte on the coast. Egypt and the United Arab Emirates have been supporting Gen. Khalifa Hifter, who has established his forces in Tobruk and refuses to recognize the UN-backed government in Tripoli. The rift has allowed the Islamic State to establish itself in Libya.

​In accordance with international law, Operation Sophia agents are authorized to board and search any suspected vessels in Libya's waters, and to dispose of any boats or equipment used to help smuggle migrants. But even with the recent arrests and confiscations, it appears Operation Sophia might only be another failed attempt to slow human smuggling.

Recognizing that potential outcome, the EU announced it will augment its current efforts with another force of 1,500 people as part of the EU coast guard. Parliament approved this new force July 6 with a mandate superseding any national member state's sovereignty. The new force will intervene in situations involving EU external borders even if the member state concerned does not ask for help. In addition, at the Government of National Accord's request, the EU is preparing to train Libya's coast guard to help in the effort.

However, it is only logical that such efforts will still have few positive results, even if force is used, for one simple reason: Libya is the main staging ground for migrants making the dangerous trip over the sea in search of better lives or to escape persecution. Unless Libya can be stabilized under the control of a strong central government, little will change. Since the regime of Moammar Gadhafi was toppled in 2011, Libya's successive governments have so far failed to unite the country, let alone control its vast desert borders where most of the migrants are crossing into the country from Niger, Mali, Sudan and even deeper in Africa beyond the great Sahara.

Whatever tools the EU deploys to reduce the flow of people to its southern shores, the operation is bound to fail unless Libya's internal problems are fixed, enabling its government to do its share in fighting the smugglers.

So far, the EU seems to lack the right policy to tackle Libya's numerous security and smuggling problems.

Whether the EU's new security approach to the migration crisis will pay off remains to be seen, but all indicators point to the fact that it takes two to tango — meaning that unless Libya, the EU's most important partner in the effort, is capable of governing itself, all other efforts will have limited effects. Any military action within the country's waters is likely to be risky and could draw the weak Government of National Accord into further marginalization to the benefit of the dominant militias.