Christians in the Kurdistan Region of Iraq complain of attempts to seize their land, which will push them to emigrate, as happened in Baghdad and other Iraqi provinces. 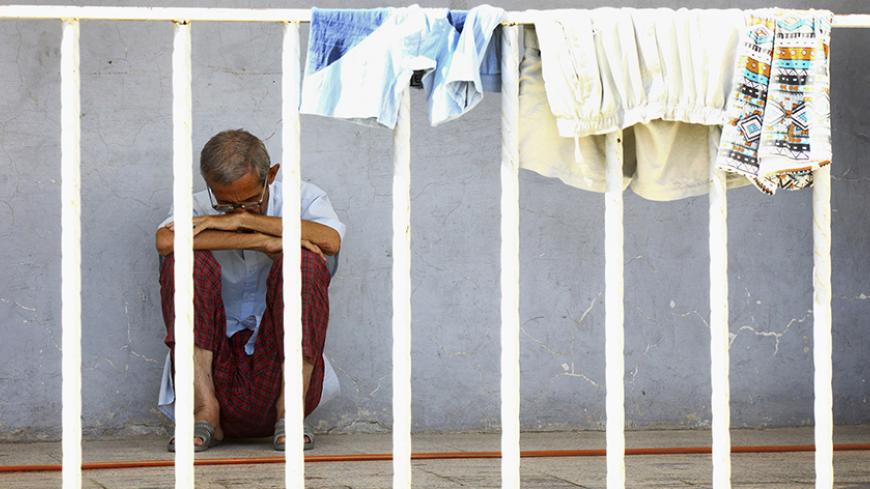 An Iraqi Christian man who fled the violence in the Iraqi city of Mosul sits inside the Sacred Heart of Jesus Chaldean Church in Telkaif near Mosul, in Ninevah province, July 20, 2014. - REUTERS

BAGHDAD — Christian citizens in the Kurdistan Region of Iraq issued complaints in court June 15 that Kurdish residents are attacking and seizing their villages in the provinces of Dahuk and Erbil. They also accused the Kurdistan Regional Government (KRG) of neglecting the crisis and failing to take serious action to resolve an issue that has been going on for some time.

On April 13, the KRG had prohibited residents from eight Christian villages in the Nahla area in Dahuk province from accessing the KRG's headquarters to protest and demand that an end be put to the encroachment upon their land on the part of Kurdish individuals and populations. However, some of them managed to make it to the sit-in location and stage a protest as they held a banner that reflected the deep sorrow plaguing Christians in the region. “Our [Christian] people’s lands are encroached upon across the Kurdistan Region,” the banner read.

On April 22, a Human Rights Watch report highlighted the hardships facing Christian citizens in the Kurdistan Region amid restrictions by the Kurdish authorities preventing them from peacefully claiming their right to restore these territories.

Kurdish individuals and tribes have been seizing lands and properties belonging to Christians since the 1980s. In 1986, Saddam Hussein's regime demolished these villages, leading to the displacement of the residents. However, as soon as the military operations of the former regime had finished, the Kurds returned to these villages and many seized Christian territory, taking advantage of the residents' forced absence, as per the testimonies of Christian residents of those villages.

What prompted residents of the villages of the Nahla area to protest is a set of new encroachments made by Kurdish citizens on their land. Earlier this year, several houses were built on these lands in the Nahla area.

The director of the Ninevah Studies Center, Michael Benjamin, told Al-Monitor that the KRG is seemingly aware of the problem, as it has put forward several initiatives between 2001 and 2010 to resolve the crisis, “but nothing has changed.”

Benjamin is an activist interested in the issues of minorities and indigenous peoples, and he relentlessly examines and follows up on the issue of Christian lands in the Kurdistan Region. Benjamin said the seized Christian lands in the various regions, towns and villages of the provinces of Dahuk and Erbil are estimated to measure “thousands of acres.”

He said, “In the Dahuk governorate alone, there is a list of 56 villages where the area of seized land is estimated at 47,000 acres. This list only includes villages whose residents have filed complaints with the relevant courts.”

He added, “There are villages whose residents were forced to abandon them from the early 1930s onward due to instability, persecution and infringement upon their rights.” These lands include “agricultural fields, pastures, springs and real estate properties.”

Yonadam Kanna, the chairman of the Rafidain Christian parliamentary bloc in the federal parliament, told Al-Monitor, “The seizure of Christian lands is part of the process of demographic change.”

He said, “There are more than 60 Christian villages inhabited by non-Christians across the Kurdistan Region, and this is part of the demographic change. We stressed the need to restore those villages and properties, but the KRG measures were not serious, which delayed the issue."

In this vein, Benjamin pointed to the role of “partisan and tribal relations,” saying, “The rights of small groups and minorities will be undoubtedly violated as they are the weakest link and lack any strong partisan, political or tribal support.”

However, Kanna pointed out that “a Christian delegation recently met with Iraqi Kurdistan President Massoud Barzani, who asked for details about the issue and promised to restore the Christian lands.”

Benjamin said, "The ongoing violation of Chaldeo-Assyrian and Christian property rights for nearly 25 years since the founding of the Kurdistan Region is one of the prime reasons that leads indigenous citizens to feel abused and lose confidence in the government, and this forces them to opt for migration.”

Mariwan Naqshbandi, the Ministry of Endowments (Awqaf) spokesperson in the Kurdistan Region, attributed the crisis to migration. He told Al-Monitor, “When Saddam bombed areas of the region with chemicals in the 1980s, Christian families fled from their villages and homes. While Muslims returned to the devastated areas, Christians traveled abroad.”

Naqshbandi said that even after the change of regime under the US occupation in April 2003 “only few Christians returned, thus allowing Muslim families to cultivate and build homes on Christian lands.”

He added that Christians returned in the past few years “and reclaimed their villages and houses. But Muslims said they would not leave unless they are compensated for their cultivation and development of those lands.”

Consequently, after Kurdish citizens clung to the lands they seized, the Ministry of Awqaf was forced to issue a fatwa prohibiting such practices,” Naqshbandi said.

However, Mikhail responded to the fatwa by saying, “I do not think that this fatwa has helped or will help Christians restore their lands. There are many complicated issues related to several sides and ministries that date back many years. With all due respect, we believe that the fatwa will not be implemented unless the highest authorities have a real political and legal will to enforce the law, bring about justice and ensure the rights of minorities in the region.”

The seizing of territories, especially when accompanied by the tribal force that governs social relations in the Kurdistan Region — particularly in the provinces of Dahuk and Erbil, where the population is known to hold on to tribal traditions — may lead Christians to migrate, as occurred in Baghdad and other provinces in Iraq.