Lobbying 2016: Brits, Saudis help Assad foes get their message through to Washington 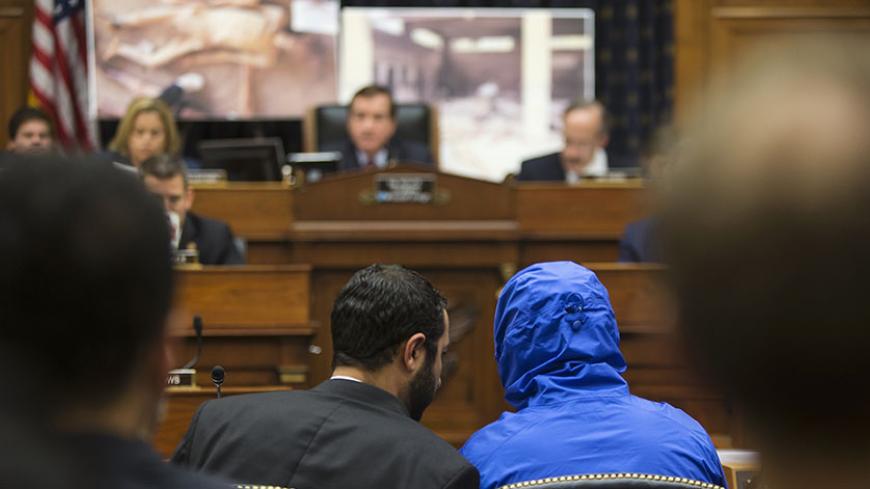 A Syrian army defector known by the protective alias Caesar (disguised in a hooded blue jacket) listens to his interpreter, Executive Director of the Syrian Emergency Task Force Mouaz Moustafa, as he prepares to speak to the House Foreign Affairs Committee on Capitol Hill in Washington, July 31, 2014. - REUTERS/Jonathan Ernst

The British government is picking up the Western-backed opposition’s $1.4 million annual tab influencing policymakers in Washington and at the American United Nations mission in New York, Justice Department records reveal. And Saudi Arabia helps get the rebel point of view in the media via the kingdom’s $8 million contract with PR giant MSL Group (formerly Qorvis).

The nonprofit Syrian Emergency Task Force, meanwhile, has relied on anonymous private donors and US and other government grants to continue building support for the revolution to overthrow Bashar al-Assad.

Together, the financial disclosures offer a window into foreign intervention in a conflict that has claimed almost 500,000 lives and turned into a proxy war between powerful regional actors such as Iran, Saudi Arabia and Turkey.

Since early 2013, the Syrian rebels have been represented in Washington by Najib Ghadbian, the special representative to the United States for the National Coalition of Syrian Revolution and Opposition Forces. A British government fund known as the UK Conflict Pool in turn paid the New York-based advisory group Independent Diplomat $1.4 million last year to lobby the State Department on the group’s behalf, part of the United Kingdom’s international support for the Syrian opposition.

“The UK has spent over 5 million pounds [$6.5 million] since the start of the conflict supporting the Syrian opposition,” a Foreign Office spokesperson told Al-Monitor in an emailed statement. “This includes providing negotiation and communication support along with advice and training to staff at their international offices.”

The Conflict Pool was created in 2009 to “reduce the impact of conflict and instability around the world,” according to the British government. It is described as a “flexible fund for small-scale conflict prevention activities” jointly managed by the Ministry of Defence, the Foreign and Commonwealth Office and the Department for International Development.

The fund was replaced in April 2015 by a 1 billion pound ($1.3 billion) Conflict, Stability and Security Fund under the direction of the National Security Council, a Cabinet committee created in 2010 to help coordinate British national security policy. That fund made headlines in the UK earlier this year for spending 2.4 million pounds ($3.2 million) to run a shadow press office for the Western-backed opposition aimed at building support for the "moderate" rebels within Syria while showcasing their battlefield successes to their military backers, notably the Pentagon.

Separately, Riyadh pays to provide "media support" for the Syrian High Negotiations Committee, an umbrella group that includes the opposition coalition, as part of a broader contract with MSL Group worth $7.96 million in 2015. The PR firm has helped to get the opposition's message out to major media outlets such as Fox News, Reuters and The New York Times, according to the latest available lobbying records.

The rebels can also count on assistance from the Syrian Emergency Task Force, a US nonprofit founded in 2012 by a Syria-born former congressional staffer named Mouaz Moustafa. The task force declared $289,000 in revenues in 2014 — down from $498,000 the year before — according to its latest available filing with the Internal Revenue Service.

The task force played an active role in shaping US opposition to Assad in the early years of the conflict, when its political director Elizabeth O'Bagy was a familiar face on US news shows. The group helped organize a meeting with the rebels inside Syria by their fierce advocate Senate Armed Services Chairman John McCain, R-Ariz., but its luster was tarnished when O'Bagy (now a McCain staffer) was forced to resign after she got caught inflating her academic credentials.

Still, the task force has continued to play an important role behind the scenes, with Moustafa himself serving as interpreter when an apparent Syrian defector codenamed "Caesar" testified before Congress in 2014 that many thousands of prisoners have been tortured to death in Assad's prisons since the start of the war. The hearing prompted the House Foreign Affairs leaders to develop new Syria sanctions legislation that cleared the committee last month.

Despite bipartisan support in Congress, opposition lobbying has had decidedly mixed results on the all-important military front.

On paper, the Obama administration has stuck to its strategy of training and equipping vetted rebels in hopes of empowering a political counterweight to Assad in ongoing peace talks. The Pentagon has asked for $250 million for the coming fiscal year, which would bring the controversial program to $1.1 billion over the past three years.

The United States also remains the biggest provider of humanitarian assistance to displaced Syrians. Since the start of the conflict the State Department has doled out more than $5 billion in assistance, about evenly split inside and outside the country.

President Barack Obama's focus on combating the Islamic State (IS) and reluctance to get further drawn into the Syrian civil war has long been apparent, however. Even as the United States is reportedly developing a backup plan to provide the rebels with heavier weapons should current stop-and-go efforts at peace talks definitively collapse, Secretary of State John Kerry visited key Assad backer Vladimir Putin in Russia last month with an offer of cooperation against IS and other "terrorist" groups, which Damascus and Moscow paint with a very broad brush.

"It would be foolish to believe that Assad would actually negotiate when he is convinced he can gain a military victory through Russian and Iranian support against his own people,” Moustafa told Bloomberg earlier this year. “Kerry is on a mission to achieve a diplomatic solution while the White House allows Russia and Assad to entrench his regime through war crimes.”

The future of Britain’s commitment to the cause is also in doubt as the island nation retrenches into an isolationist crouch. After voting to divorce the European Union, Britain in July chose as its foreign secretary a man who once praised Assad patron Putin’s “ruthless clarity” in propping up his protege.

“No matter how repulsive the Assad regime may be — and it is — their opponents in the Islamic State of Iraq and the Levant (Isil) are far, far worse,” Boris Johnson wrote in a March 2016 op-ed in The Telegraph. “If Putin’s troops have helped winkle the maniacs from Palmyra, then (it pains me to admit) that is very much to the credit of the Russians.”