UN Syria envoy looks for talks to resume in July

UN Syria envoy Staffan de Mistura said a “critical mass” of agreement between Russia and the United States was still needed before holding a new round of intra-Syrian talks on a political transition. 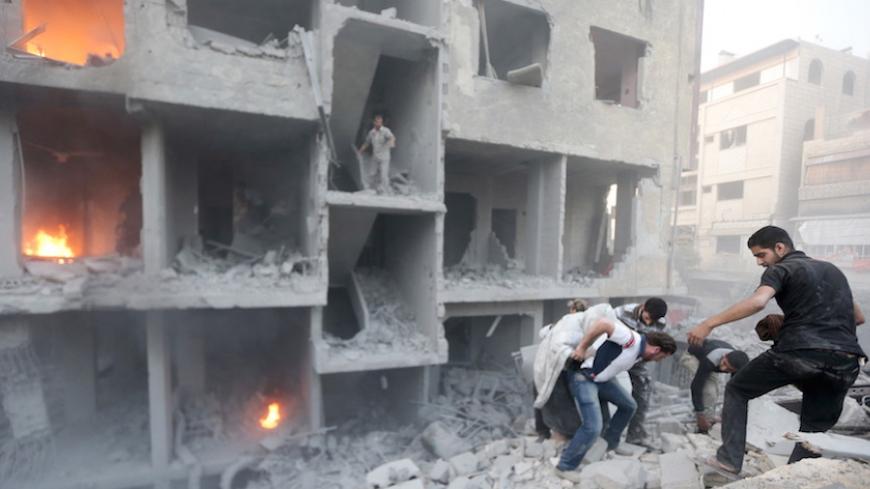 Men search for survivors at a site hit by what activists said was heavy shelling by forces loyal to Syria's President Bashar al-Assad in the Douma neighborhood of Damascus, June 16, 2015. - REUTERS/Bassam Khabieh

WASHINGTON — A date for the resumption of Syria peace talks may be clarified after a UN Security Council meeting on June 29, UN Syria envoy Staffan de Mistura said June 23 as he headed to Washington and New York for consultations after meeting Russian President Vladimir Putin in Russia last week. The international consultations on resuming Syria political talks come as UN humanitarian officials gave a mixed picture of the situation on the ground, with aid having reached 16 of 18 besieged areas since February but a continued degradation in a partial cease-fire continuing to impede humanitarian access.

With an Aug. 20 target date for unveiling some form of Syria transitional government, de Mistura aimed for the next round of intra-Syrian talks between the regime and opposition delegations to be held in July in Geneva. Meanwhile, his team was preparing to hold “technical talks” with the Syrian opposition High Negotiating Committee in Riyadh this week, after similar rounds of under-the-radar discussions with other opposition groupings in Moscow and Cairo, he said.

“So the question is: When are we going to have the intra-Syrian talks? Well, it will also depend on the discussions I will be having in New York and Washington and in particular the debate at the Security Council ... but also what are the best conditions for holding them in the best possible chances,” de Mistura told reporters in Geneva on June 23.

“The aim is still July, remember, because August is not a fictional but is a real timetable we are having in our own radar screen,” he said.

De Mistura was then heading to the United States for consultations after he and UN Secretary-General Ban Ki-moon held a “long and comprehensive” meeting with Putin and Russian Foreign Minister Sergey Lavrov in St. Petersburg on June 16, on the sidelines of the St. Petersburg International Economic Forum.

“I agree with the proposals of our partners, primarily our American partners that suggest … considering the possibility of bringing representatives of the opposition into existing power structures — for instance, the government,” Putin told the St. Petersburg Forum on June 17. “It is necessary to think about what powers this government will have.”

“Many of our partners are saying that [Bashar al-] Assad should go,” Putin said. “Today they are saying no, let’s restructure governing institutions in such and such a way, but in practical terms it will also mean his departure. But this is also unrealistic. Therefore, it is necessary to act carefully, step by step, gradually winning the confidence of all sides to the conflict.”

“Don’t forget that the cessation of hostilities took place when the Russian Federation and the United States agreed on something, and that produced a critical mass,” he said. “We are looking for the same type of critical mass on the beginning of the political transition, and we can help. We are helping, but we need that one.”

The international consultations to prepare for resumed Syria political talks come as there has been an improvement in the delivery of humanitarian aid in Syria in June but continued degradation of the cessation of hostilities.

“The [humanitarian] situation on the ground is bad and in many places worsening,” UN Syria humanitarian chief Jan Egeland told journalists in Geneva on June 23. “We are working in active combat zones; we are working in the crossfire. Local agreements have broken down.

“We are acutely aware we are only alleviating suffering,” Egeland added. “Besiegement is continuing; it should never be there in the first place. … It belongs in the Middle Ages, not in our time.”

Asked about reports of the Syrian regime bombing the besieged town of Daraya the day after humanitarian aid was delivered for the first time in over three years, UN in-country Syria humanitarian coordinator Yacoub El Hillo repeatedly said it was terrible.

“It’s a terrible thing that when we are allowed to go and deliver to a place … that immediately after we get reports of shelling and strikes and attacks,” El Hillo told journalists after meeting with the International Syria Support Group humanitarian task force in Geneva on June 23. “It is terrible and we do register our objection. … People cannot be punished simply because they have been given the opportunity to receive humanitarian assistance.”

“This war continues to rage, and the price is being heavily paid and borne by the average people,” El Hillo said.