The International Syria Support Group, meeting in Vienna May 17, appeared to lower emphasis on Syria political talks as it urged shoring up a partial cease-fire and using air drops if needed to get aid to towns subjected to a type of "medieval" siege. 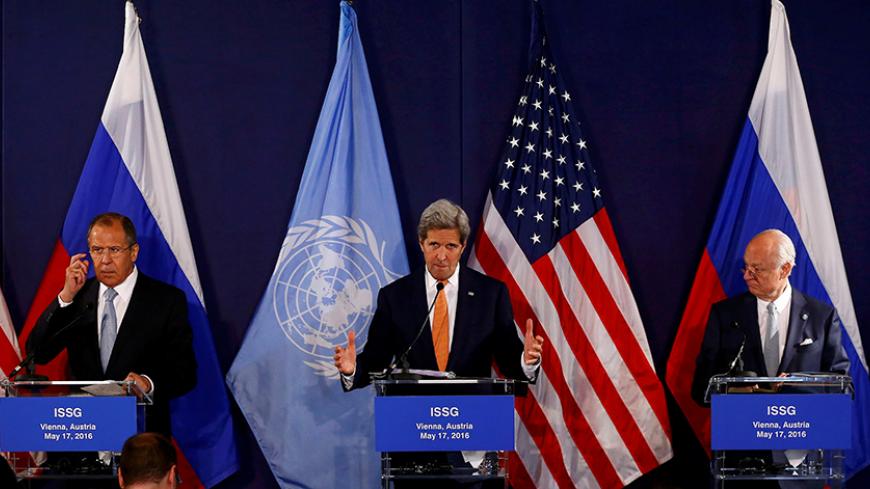 WASHINGTON — Foreign ministers from two dozen nations that comprise the International Syria Support Group (ISSG), meeting in Vienna on May 17, called for redoubling efforts to shore up a partial Syria cease-fire and try to expand it nationwide, and for using air drops if necessary to get humanitarian aid to besieged areas whose conditions of desperation were described as “medieval.” But in a grim sign of continued impasse among world and regional powers over a political solution to the five-year war, they did not immediately set a new date for talks between the Syrian regime and opposition.

To end the war and focus on fighting the so-called Islamic State, “a variety of competing interests are going to have to be reconciled, and those involved in this conflict with competing agendas are going to have to be willing to prioritize peace,” US Secretary of State John Kerry, speaking at a joint press conference with Russian Foreign Minister Sergey Lavrov and UN Syria envoy Staffan de Mistura, told reporters following the ISSG meeting in Vienna on May 17.

Recent efforts to de-escalate the conflict are “fragile, and increasingly threatened by irresponsible and dangerous actions taken by those who would rather have this effort fail,” Kerry said. “And there are, frankly, actors on both sides who we think make that choice.”

On not yet announcing a new date for intra-Syrian talks, the UN Syria envoy said the cease-fire that went into effect Feb. 27 had deteriorated to a 50% cease-fire in recent weeks.

Meantime, despite the partial cessation and a unanimously endorsed UN Security Council resolution demanding it, the Syrian regime has only permitted humanitarian aid to be delivered to 12 of 18 besieged areas, he said, describing conditions in the towns of Darayya, Kafraya and Foua as particularly desperate.

“On the cessation of hostilities side, … the main real difference is that what we used to have at 80% has come down to 50,” de Mistura said at the joint press conference.

“And on the humanitarian aid we are still not reaching those we want to reach,” he said, describing the besieged locations in Syria as “the closest to a medieval type of siege that we have seen in recent history.”

“The issue is [that we are] still waiting for some type of concrete outcome of this meeting, but we cannot wait too long,” de Mistura warned.

“We need to bear in mind that credible intra-Syrian talks will become credible when … there is a credible development on the cessation of hostilities and a credible improvement on the humanitarian side.”

Perhaps the most notable new initiative that came out of the ISSG meeting was a call to the World Food Program to use air drops to get humanitarian aid to some 12 besieged areas if they were not able to be accessed by land, starting from June 1.

The initiative was pushed by the British and backed in a joint statement issued by all members of the ISSG, which has grown to over two dozen members and includes, in addition to the United States, Russia and European Union, regional rivals backing different parties in the war, including Saudi Arabia, Iran, Qatar and Turkey.

“We agree that the delivery of humanitarian assistance must begin or resume — depending on the case — in Douma, East Harasta, Arbeen, Zamalka, Darraya, Fouah, Kefraya, Madaya, Zabadin, Muadhamiya, Yarmouk, Zabadani and Kafr Batna,” Kerry said. “And starting on June 1, if the UN is denied humanitarian access to any of these designated areas, the ISSG calls on the World Food Program to immediately carry out a program for air bridges and air drops for all of those areas in need.”