Will Turkey's military might be overshadowed by political failures?

Although the Turkish military is preoccupied with developments in Syria, border security and combating terrorism, its Efes exercise on May 30-31 was a major show of force. 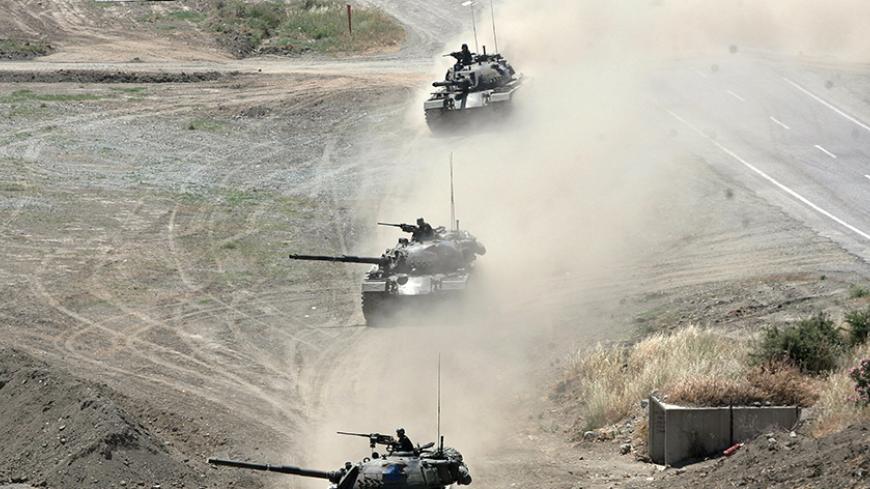 Though the Turkish Armed Forces (TSK) is dealing with developments in Syria, border security issues, and combating the Islamic State (IS) and the Kurdistan Workers Party (PKK), it nevertheless proceeded with the event May 30-31. The live-fire exercise was designed to test the combined operations of TSK’s land, naval, air and special forces. This year, for the first time, units from the United States, Germany, Britain, Saudi Arabia, Azerbaijan, Qatar, Pakistan and Poland participated in the exercise.

Another major issue that attracted attention this year was the radical change in exercise scenario observed by representatives of 79 countries. In previous years, the exercise was conducted with unlinked, small-scale scenarios such as amphibious landings, securing beachheads, close air support, long-distance artillery, and rocket and air-fire support. But this year the scenario was completely rewritten, and for the first time tested a hybrid operation that included combating terror, cyberwarfare and psychological warfare.

According to the scenario, an imaginary country called Torik had occupied the island of another imaginary country, Arnlad. The latter asked for United Nations assistance. At the request of the UN, all eight participating countries formed task forces. Friendly forces that fought off the occupying country also had to combat a terror organization. The exercise aimed at planning, coordinating and executing combined operations; training personnel; and testing and developing command-control procedures, electronic warfare tactics and air-space control. The exercise also briefed participants on each other's procedures and tactics, and the joint use of weapons, and aimed to elevate the training levels of participating forces and their headquarters personnel.

This year, the scenario also included a separatist terror organization active on the occupied island, and observers noted how the situation illustrated TSK’s real-life practice of giving priority to combating an ethnically motivated terror organization, such as the PKK, before taking on a religiously motivated one like IS. When securing peace and combating terror were added to the agenda, for the first time civilian personnel from government ministries and other public bodies were incorporated into the exercise. It seems somewhat belated, but by including civilians, the TSK showed it is finally becoming aware of the need for civilian-military integration in future operations.

The exercises also employed several firsts in the use of military technology. For example, Atak helicopters participated in live-fire action. The helicopters just entered TSK service and are now being used in clashes with Kurdish armed groups in the southeast. Vestel Defense Industry Corp.'s Karayel assault drones, and Bayraktar TB2 tactical drones were used for the first time. The Turkish media has covered in detail the briefing of President Recep Tayyip Erdogan and Chief of General Staff Gen. Hulusi Akar by the owner of the Bayraktar company, which has made substantial progress in producing armed drones. Bayraktar’s owner, Selcuk Bayraktar, is Erdogan's son-in-law.

Akar, referring to the United States in his speech ending the exercise, said, "The TSK has always preferred to solve problems through dialogue. But nobody should expect the TSK to disregard and not react to violations of peace and security of our country and the region. The TSK is supporting alliances set up to preserve peace and stability in our region and in the world. But it should not be forgotten that the promises made and agreements reached when setting up such alliances are mutually binding obligations."

Erdogan followed the exercises closely, which prompted exceptional interest in them by pro-Justice and Development Party media. For instance, the daily Aksam, under the headline “Independence exercise," wrote, “This exercise was a message to Turkey’s allies who have not supported Turkey adequately in combating terror. Turkey once again showed that it can take care of its own needs. The chief of general staff — who summed up the exercise — emphasized Turkey’s strength while hinting at his disappointment with its allies, led by the United States.”

In a nutshell, the Efes military exercise was a display of the TSK’s efforts toward an institutional turning point, to adapt to future operational environments and hybrid threats. Naturally, observers noted the relevance of the exercise scenario to the operational environment in northern Syria, and that the exercise was transformed into a multinational effort. Observers had a chance to see how the TSK is working tirelessly to improve its combat effectiveness with new tactics and operational methods.

Of course, it is not enough for the TSK to become an effective war machine if civilian decision-makers fail to make appropriate political choices or lack the skill to comprehend global security developments and future operational environments. Misjudgments at political-strategic levels in today’s complex operational environments are not easy to overcome, no matter how successful soldiers can be.