The number of UFO sightings over Turkey has significantly increased in the past few years, with some Turkish Airlines pilots convinced that the bright lights in the Turkish airspace are in fact UFOs. 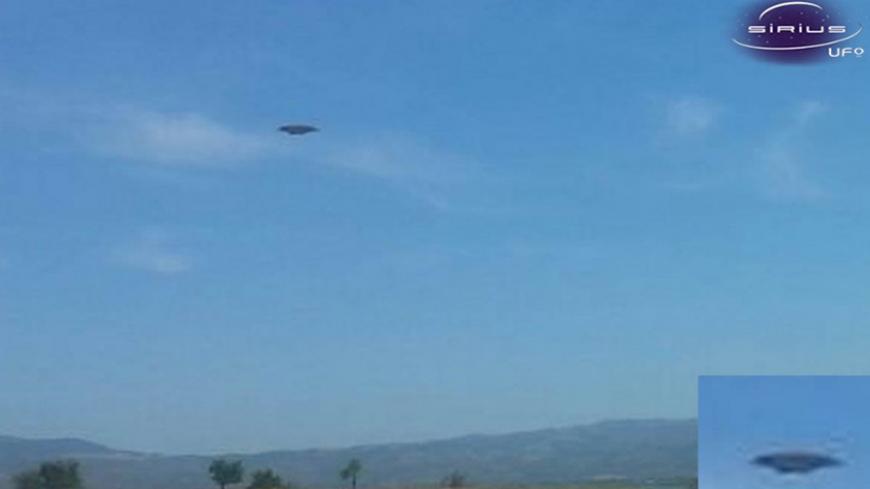 I was on holiday in Bodrum in July 2014 when at about 5 p.m. a strange, bright object appeared in the sky. My first thought was that this was a balloon, but a balloon would not appear so large from that altitude. Moreover, the object was emitting a bright light and moving faster than a balloon. It disappeared in 10-15 seconds. It had taken me by surprise, and I was uncertain if I had just seen a UFO.

Bodrum is one of the most popular resort towns in Turkey, where foreign and local tourists flock to in the summer months. Announcing in public that I had just seen a UFO would have surely resulted in responses mocking my observation. Since I wasn’t sure of what I had seen, I didn’t make a fuss out of it and just told my wife, who replied, ”It could be something else such as a laser show.”

But two days later, the newspapers carried reports that a UFO had been seen from Bodrum. The Sirius UFO Space Sciences Research Center that studied the photos taken by three people in Bodrum asserted that it was indeed a UFO and posted the photos on its website. Skeptical citizens came up with explanations such as “It could be the Ramadan cannon” (marking the end of the fasting day) and “The end of the world must be near.”

Then started a flow of reports from citizens who recounted having seen UFOs, the latest of which was taken rather seriously when two Turkish Airlines pilots from the same plane reported having seen one. On May 20, pilots of a Turkish Airlines Boeing 737 flying from Bodrum to Istanbul reported seeing an unidentified object emitting green light at an altitude of about 17,000 feet crossing over them as they approached the airport around 11:30 p.m. The following is what the pilots reported to air traffic control at Istanbul Ataturk Airport: “An unidentified object emitting green light crossed in front of us at a distance of 2,000-3,000 feet and disappeared. We think it is a UFO. Both pilots saw the object.”

Airport officials, however, reported no such detection on their radars, and Turkish Airlines Flight 2525 landed at the airport at 00:37 a.m. A senior Turkish Airlines pilot commented on his colleague's report to daily Hurriyet, saying, “They were able to report a UFO because they were in Turkish airspace. They couldn’t have said this in European airspace to avoid embarrassment.”

The news spread fast globally. British newspapers Daily Mail and Daily Mirror gave it headline coverage and reported that 500 miles away an Egyptian plane had crashed into the Mediterranean Sea about an hour after the pilots had reported seeing the UFO. However, both papers mixed up the days as the Egyptian plane had crashed a day before the UFO sighting. Turkish newspapers mocked the British papers for trying to start a conspiracy and said it was the British newspapers that had veered off course.

While the report of the Turkish Airlines pilots was not confirmed by the authorities, a Turkish tourist from the Dead Sea-Fethiye resort in the south of the country offered new evidence. On the day of the sighting, Celal Toprakci — who was photographing his daughter paragliding around 5 p.m. — noticed an object emitting green light moving east to west. Toprakci could not understand what he had seen, but after returning to his hotel he heard on TV the report by the two pilots. “I looked at the four frames I had photographed and noted a green object had moved from my right to my left and then disappeared over the horizon,” Toprakci said.

Hakan Akdogan, the chairman of the Sirius UFO Space Sciences Research Center, insisted the pilots had actually seen a UFO. He told Al-Monitor, “Two pilots saw the object simultaneously. These are people who can distinguish what they see in the sky and they say it passed close to them. In UFO literature, a 600-meter proximity is not easily encountered. This report does mesh with conventional technology. Anyhow, there shouldn’t be any other object in the landing path of a plane. The fact that the object was not detected by radar means it was an extraterrestrial object. Moreover, the photographs taken by a tourist at Fethiye confirms the sighting of the pilots.”

Last year, Ibrahim Bilir — a Turkish Airlines pilot with 40 years of flight experience — said that in 2010 returning from Osaka his team had seen a UFO at an altitude of 11,000 meters. “We were flying with three pilots. Four other planes were flying in the same direction. In front of me was a Turkish Airlines flight from Shanghai and behind me was a Lufthansa flight. We saw a bright light approaching that came very close. It was silver-colored, very bright and was extremely powerful; it burned our eyes. All three pilots on our plane saw it; it came toward us and flew over us, all in 30-45 seconds. If I had been the only witness, you could say it was a hallucination. But the crews of all four planes saw it.”

In Turkey, UFO events are monitored by the Sirius center. According to their records, last year between April 1 and Oct. 28 there were 3,640 reports of UFO sightings; 526 of them were recorded on camera, and 468 of them could have been satellites, Chinese lanterns, birds, balloons, photoshopped photos, light reflections or simple mistakes. A total of 79 were confirmed as UFOs.

In 2012, UFO reports went up by 35% compared to the year before, and that trend continued with a 45% increase in 2013 and a 60% increase in 2014. Akdogan said, “We predict that UFO sightings will seriously increase in Turkey and internationally in the coming years, and 2016-2020 will be a turning point in UFO sightings. We believe that governments will then have to reveal the realities they have been concealing.”

The world has been witnessing these kinds of sightings for many years; reports keep piling up but governments are yet to acknowledge the phenomenon. Akdogan added, “The states know about it. They have evidence, but their citizens have to be prepared for this reality on a psychological level with appropriate information. This is what films accomplish right now.”