Turkey's loss of six pilots in the crash of three F-4Es has led to a public outcry as the nation awaits answers and the air force works on replacing the fleet. 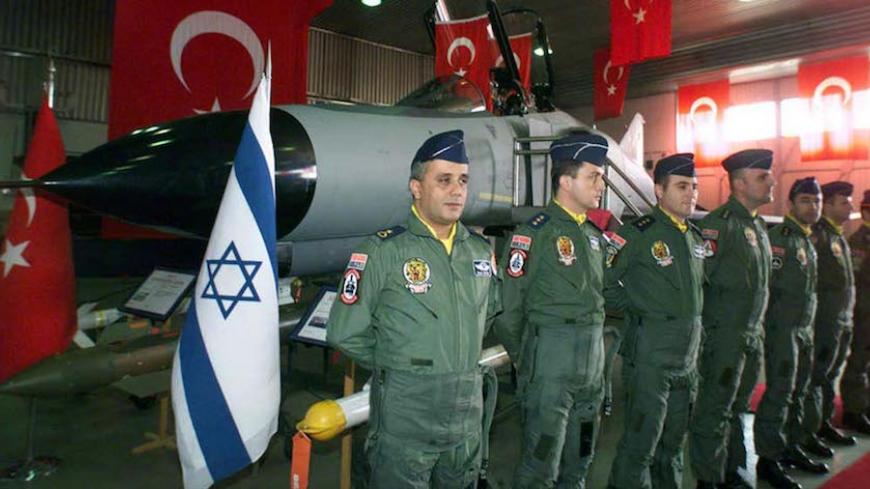 Turkish air force pilots stand in front of an F-4 fighter plane flanked by Turkish and Israeli flags during a ceremony for F-4E fighter planes at an air base in the western Turkish city of Eskisehir, Jan. 27, 2000. - REUTERS

Three crashed Turkish Air Force (TAF) planes and six dead pilots in close to one week has produced a national outcry, putting these events at the top of the public agenda. The anger was palpable in the media. “Someone has to explain these accidents,” demanded the daily Haberturk's headline for a story taking a comprehensive look at F-4Es in Turkey.

The country now awaits answers to its questions: Why did the planes crash? Were there technical problems? Was there pilot error? Were there sinister forces at play? Why didn’t the pilots eject? When will the F-4Es — in active service in the TAF for 40 years and dubbed “flying coffins” by the public — be retired?

Over the past 40 years, the TAF acquired 236 F-4E aircraft. Sixty have been lost in accidents, and 14 pilots have been killed in related accidents since 2003. The US Air Force retired its F-4Es in 1996. The TAF procured 72 "best condition" F-4Es for upgrading.

The decision was made to upgrade F-4Es in the early 1990s because of their technical inadequacy for the requirements of the day. Cost played a key role in upgrading instead of buying new planes, as the former offered substantial savings. In 1997, a deal was signed with IAI to upgrade the avionics on 54 planes. Twenty-six F-4Es were upgraded in Israel and 28 in Turkey, equipping them with the latest Israeli-made radars, navigation and communications systems, and cockpit and electronic countermeasures equipment. The contract was completed in 2003. With the improvements made to the fuselages, the life of the planes was prolonged by 6,000 flight hours. The F-4Es were upgraded to be in service until 2020, with their fuselages remaining viable until 2030.

Air force experts told Al-Monitor on condition of anonymity that in the Malatya accident, the two planes crashed into a mountain as they descended toward base, returning from a night training flight. This would appear to rule out pilot error per se or technical problems as the primary cause of the accident. Most likely, the pilots were flying by sight when they were suddenly blinded by dense fog and crashed into the mountain.

In the March crash, the pilots were training to evade ground-to-air missiles at low altitudes. In these maneuvers, the warplanes drop chaff and flares to deflect missile threats. It is thought that flares and chaff released by the plane penetrated the F-4E’s engine, causing it to crash. Military sources told Al-Monitor that the two pilots had been combat-ready, veteran instructors. One had flown the same plane in the same area 28 times and the other 53 times.

Pro-government newspapers and television outlets, which have made it a habit of pushing conspiracy theories to explain everything that happens, made some interesting comments about the accidents. According to one, the United States intentionally caused the crashes in retaliation for Turkey’s increasingly independent foreign policy. Another claimed that the number of crashes involving F-4Es greatly increased after being upgraded, by Israel. Yeni Akit, under the banner headline “Israel wrote F-4 software,” blamed the accidents on Israel’s discomfort with Turkey’s changing foreign policy. These crashes were Israel’s way of punishing Turkey.

Continuing with the Israeli angle, Yeni Akit headlined another report, “Treason by generals of February 28 coup.” It quoted aeronautics and space technology professor Ahmet Nuri Yuksel as saying that he had repeatedly warned the generals against awarding the modernization contract to Israel, but they had not listened. Yuksel said he has suspicions about Israel’s role in the crashes, drew similarities between the two incidents and wondered aloud why none of the pilots managed to eject.

Retired Col. Memduh Kayisbudak said there might have been some weaknesses in pilot training. “I flew F-4s for five years. They are among the best of our warplanes. I don’t think there was any problem with the engines and electronics in these accidents. I suspect a deficiency in the training of the pilots.” Retired Lt. Gen. Erdogan Karakus said Turkish pilots undergo very long, intensive training but that in recent years the TAF has gone through some difficult times. Many of its pilots were imprisoned on charges of coup conspiracies, and its command structure experienced a series of upheavals. A number of pilots apparently quit to join civilian airlines, moves that caused disruptions to training activities.

Other air force experts, however, insisted to Al-Monitor that the TAF has a well-deserved respected reputation for its pilot training. They said training lasts five to six years and that pilot error by such experienced pilots of their rank was highly unlikely.

Another potential cause cited was inadequate maintenance and the age of the fuselages. Some experts, however, said TAF maintenance met international standards and was not likely an issue. In neither accident did pilots report anything unusual or an emergency before they crashed.

If the likelihood of pilot error or maintenance problems are remote causes, might external factors indeed have played a role, i.e., dense fog and low visibility, chaff and flare sucked into engines, mistakes made during the avionics and software upgrade?

At a March 5 press conference in New York, Prime Minister Ahmet Davutoglu said, “According to preliminary information I have, the problem is not with the F-4s, but with the nature of the training. Such training that duplicates war conditions at times includes complex maneuvers. We will look into it. If necessary, F-4s can be excluded from such training.”

Minister of Defense Ismet Yilmaz offered a more populist response, declaring, “The Turkish people no longer trust F-4 planes. I think we must think twice before we use these planes again. Our commanders and chief of staff will do whatever is necessary.” In fact, despite such words, perhaps tailored for the moment, Turkey is in the middle of planning to replace its entire F-4E fleet and aging F-16s with the new generation F-35A by 2020.

The F-35A project is expected to cost $16 billion, with the TAF preparing to integrate 100 of them. At the moment, the air force is working to integrate the new planes into the national command and control and allied radar systems, to set up maintenance systems and to train pilots and technical personnel. These preparations are likely to take five years, and in the meantime Turkey’s F-4Es will continue to fly, despite public concerns over recent events.