Turkey has started what looks like a sharp turn in its relations with Israel in consideration of shared security and military priorities, though it will take some time to rebuild ties to their former levels. 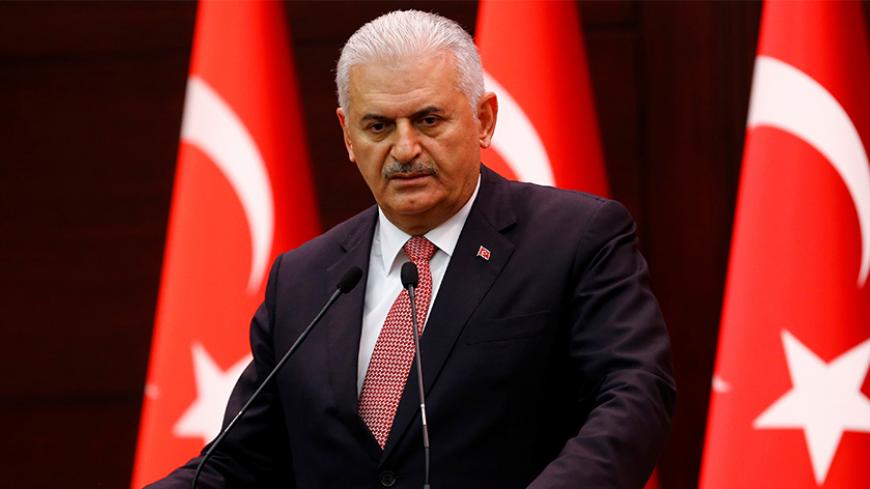 As expected, Ankara has begun to take sharp turns in its foreign policy. Following a statement by Prime Minister Binali Yildirim that Turkey will pursue a more realistic foreign policy to decrease enemies and increase friends, the first major turn has appeared in Israel-Turkey relations.

Relations between the two countries were radically degraded after May 31, 2010, when the Israeli military raided a Turkish flotilla that was trying to break through the Israeli blockade and deliver humanitarian relief supplies to Gaza. Israeli soldiers killed 10 Turkish nationals in the course of the incident.

Ankara withdrew its ambassador from Tel Aviv and asked Israel to apologize, pay indemnity to the families of the victims and lift its blockade on Gaza. When Israel did not respond, Turkey drastically lowered diplomatic relations and suspended its entire gamut of military agreements and defense projects with Israel. The military-security field has definitely suffered the most from the friction between the two countries after the Mavi Marmara incident.

Before the flotilla raid, there was truly far-reaching military cooperation between Israel and Turkey that dated back to the 1960s and peaked in the 1990s.

For example, in the early 2000s, in return for Israel’s technical and intelligence support to Turkey in combating the Kurdistan Workers Party (PKK), Turkey shared with Israel the intelligence on Iran it had collected in Iraq and Turkey. Israel’s combat pilots participated in the annual Anatolian Eagle exercises held at an airfield in Turkey’s central Anatolian province of Konya, where they conducted training over mountainous topography unavailable in Israel. They also conducted regular joint exercises in the eastern Mediterranean until 2010. In return, Turkish pilots received training on surface-to-air missiles in Israel.

In the defense industry, the most recent joint projects were the modernization of M60 tanks at a cost of $650 million and F-4E planes for about $1 billion, procurement and operation of armed Heron UAVs for $200 million, electronic reconnaissance and surveillance systems at $200 million, and procurement of missiles and smart ammunition for $150 million.

After the Mavi Marmara incident, intelligence sharing between the two countries came to an end, followed by cancelations in military training and cooperation. Some defense industry projects were halted and others became extremely cumbersome processes. For example, take the E-7T Peace Eagle Early Warning and Control aircraft manufactured by the US company Boeing and the Israeli company Elta. When relations broke down, some of those systems had already been delivered. In the end, the rest of the deliveries were completed, but Turkey's defense industry undersecretariat initiated a project to manufacture a substitute for the E-7T in Turkey.

The aerial reconnaissance capabilities of the Turkish air force suffered the most. A plan had been made to procure high-definition electro optics and radar pods to be used in RF-4E Phantom planes. When the contract was canceled, Turkey opted to fill the gap by procuring similar pods from the United States.

In a project with Israel, 170 Turkish M60 tanks had been modernized. Plans were made to upgrade another batch of 169 tanks and offer them to the international market, but they were shelved when relations cooled.

After the downgrading of ties with Turkey, Israel conducted a series of military exercises with the air, sea and ground forces of Greece and the Greek Cypriots.

Today, according to corridor whispers in Ankara, pressure from the Turkish armed forces on the political echelons around its needs and projects was the key element in the recent shift in relations with Israel. According to a high-level security bureaucrat who asked not to be identified, Ankara, because of its disturbing isolation in the region and with inadequate support from the United States and NATO, had no choice to but turn back to Israel for regional military-security cooperation.

According to Arda Mevlutoglu, a defense industry specialist, though there is definitely a need for cooperation between Israel and Turkey in these fields, it is unlikely that relations will be restored to 1990s levels anytime soon. He told Al-Monitor, “Ankara and Tel Aviv have similar perceptions of threats and posturing of forces in the region. This may help the shaping of a new geopolitical equation for the eastern Mediterranean and facilitate their counterbalancing of Iran in the region.”

Defense researcher Turan Oguz agreed that the growing profile of Iran, the regionalization of the PKK threat and regional developments around Hamas, the Islamic State (IS), Iraq and Syria have laid the ground for Ankara and Tel Aviv to cooperate, even if neither is eager to do so.

“The shooting down of the Russian plane pushed Turkey into an isolation with consequences we couldn’t immediately grasp. We wanted to save ourselves from the situation with the help of NATO. We noted an increase in our requests for air defense systems, UAVs, multiple rocket launchers and joint exercises both from NATO and the US,” Turan told Al-Monitor. “But then, when the response from NATO was weak, Turkey had to make its way out of the corner it was stuck in. The most suitable candidate was Israel, whose prowess and intimacy with the United States was known. Today, Israel is the country closest to the US and Russia. That is why Israel can play a middle role in preserving Ankara’s relations with the US at an appropriate level and also help normalize [relations] with Russia.”

According to Oguz, if Turkey’s relations with Russia begin normalizing with Israel’s mediation, rapprochement with Syria and Armenia could emerge as a side benefit that Ankara is not likely to reject.

The Israeli security establishment also appears to favor normalization with Turkey. “Turkey faces serious regional issues with problems in its Syria policy and an unprecedented crisis with Russia. They have tension with Iran. Turkey looks at the Middle East and sees total bankruptcy. The only country that it can establish stable relations, start a dialogue and discuss political options with is Israel,” retired Israeli Brig. Gen. Michael Herzog told Al-Monitor.

Ankara and Tel Aviv’s increasing need to share field intelligence seems to have triggered this normalization. Recently, Mossad chief Yossi Cohen visited Ankara and met with the top brass of the intelligence-security bureaucracy led by Turkey’s intelligence chief Hakan Fidan. They reportedly focused on combating the PKK and on Turkey’s relations with Hamas.

Now it's time to ask which actors would be most concerned about this warming atmosphere between Ankara and Tel Aviv. Naturally, the usual suspects will be the PKK, Hamas, Iran, the Syrian regime, IS and Russia.

It is almost certain that Israel will play a mediating role between Ankara and Washington and Ankara and Moscow, in return for which Turkey will enable Israel to play a more active role in NATO. Israel could also be a secret player in easing the crisis between Ankara and the Syrian regime. That would leave us with four actors we should be concerned with: Iran, PKK, Hamas and extremists like IS.

In sum, field realities make it clear that though it will benefit both parties, rapprochement between Israel and Turkey is likely to be much more expensive for Turkey.