Foreign investment in Turkey is rising, but not the type it needs

In the past five years, 24,000 new foreign companies have set up shop in Turkey, but due to a lack of confidence they have avoided industrial production. 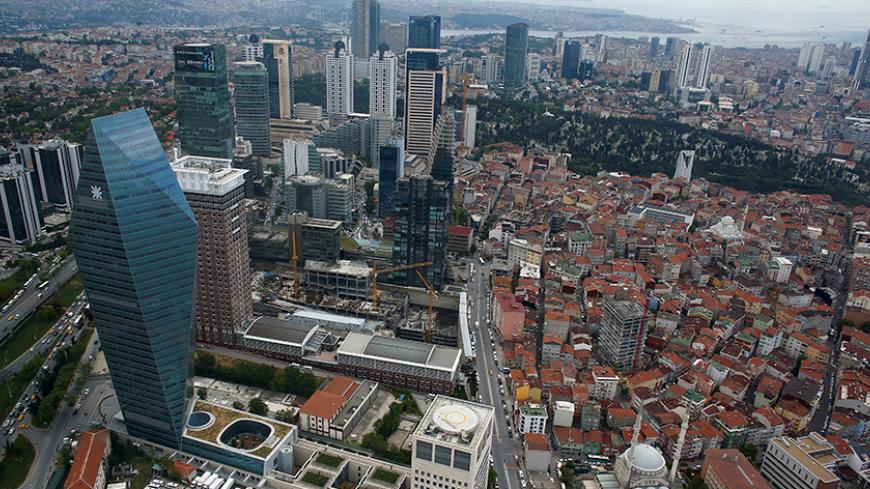 The Levent business district is seen from the Sapphire Tower in Istanbul, May 3, 2016. - REUTERS/Murad Sezer

Every year, the Istanbul Chamber of Industry lists the biggest 500 industrial companies of the country based on sales of products they manufacture. The latest such list, called the ISO-500, was released at the beginning of June.

This figure means 24,000 foreign companies have opened branches in Turkey over the past five years. But the decline in the number of large companies indicates that production capacity has not simultaneously increased because most of the new companies are small- and medium-size operations. Data from the Ministry of Economy suggests that foreigners are mostly engaging in marketing and trading instead of production. Today, 17,905 foreign companies operate in wholesale and retail commerce. Next are 7,948 companies operating in the real estate sector. The production industry claims the smallest segment at 6,308 companies.

These numbers may help explain why the number of foreign companies on the ISO-500 is decreasing. Only about 8% of about 49,000 companies are in manufacturing. Nearly 82% of foreigners are active in nonproduction fields.

Mehmet Donen, a former minister of industry and commerce, told Al-Monitor, “Companies set up in Turkey in recent years are generally of Middle East origin and small. Those coming from Iraq and Syria deal in commerce. Meanwhile, major companies producing industrial goods are leaving Turkey. There are three reasons: They don’t trust the legal system in Turkey. The second is polarization and growing tensions in the country. The third is terror. Not only foreigners but also local major companies are leaving the country.”

Of the foreign companies in Turkey, 20,918 are of European Union origin. Among the EU countries, Germany leads the list with 6,602 companies followed by Britain with 2,933, the Netherlands with 2,610 and Italy with 1,321.

But an assessment based on the number of companies may be misleading. The amount of capital these countries have invested in Turkey paints a different picture. For example, between 2002 and 2016, the country that brought in the most foreign capital is the Netherlands with $21,354 billion. The United States is the second-largest importer of capital with $10,798 billion, and Austria is third with $9,590 billion.

The Turkish government is also concerned with the changing types of foreign investments. A new incentive package is being prepared to encourage foreigners to establish financially stronger industrial facilities. These incentives, which include tax breaks, are expected to be introduced soon.

Whether foreign or local, investors' top priority is confidence. No matter how many incentives are offered, if the future is uncertain it may be difficult to attract any investment at all.

The tendency of foreigners in recent months to slow down their investments but engage in stock market transactions is a sure sign that the government first has to overcome the loss of confidence before introducing an incentives package.