How will Palestinians resolve internal divisions?

In an interview with Al-Monitor a few days after her release from an Israeli prison, Khalida Jarrar, a member of the PFLP and PLC, talked about ways to solve the Palestinian dispute and electing a new president. 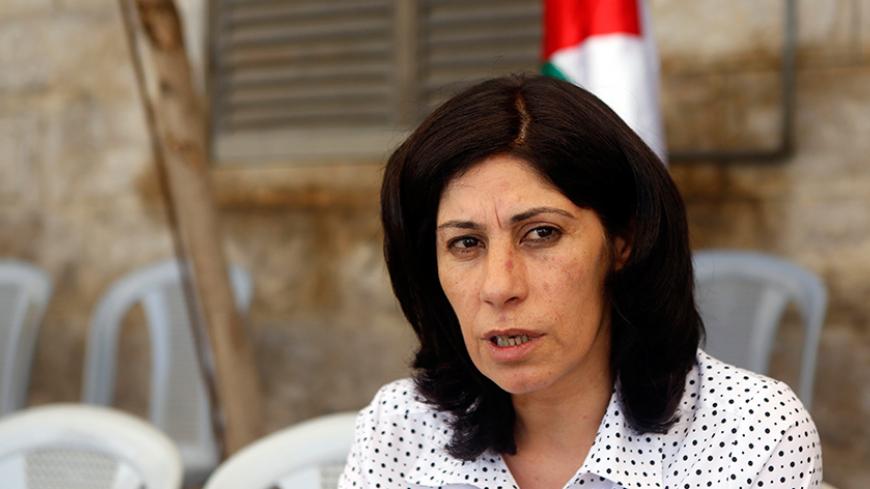 Khalida Jarrar, a Palestinian member of parliament from Ramallah, speaks during an interview with Reuters at her solidarity tent erected outside the headquarters of the parliament in the West Bank city of Ramallah, Aug. 21, 2014. - REUTERS/Mohamad Torokman

Khalida Jarrar, a member of the political bureau of the Popular Front for the Liberation of Palestine (PFLP), said in an interview with Al-Monitor that the gateway to resolving the contentious issue of Palestinian reconciliation and electing a new president lies in revitalizing the Palestine Liberation Organization (PLO) and holding democratic elections.

Jarrar, also a member of the Palestinian Legislative Council (PLC), was arrested by Israel on April 2, 2015, on 12 charges, including belonging to a banned organization, the PFLP, and incitement to kidnap Israeli soldiers. Palestinian civil rights organizations tried to keep Jarrar's case in the international spotlight, maintaining contact with the Inter-Parliamentary Union, the European Parliament, the Office of the United Nations High Commissioner for Human Rights and Amnesty International. She was released June 3.

In a phone interview from her residence in Ramallah, Jarrar said that Israel aims for the Palestinians to have much less than autonomous rule and that the Palestinians will not accept calls for the establishment of a confederation with Jordan or the annexation of Gaza by Egypt. Instead, they will continue to press their legitimate demand for an end to the Israeli occupation.

Al-Monitor:  As a result of an international campaign, you were released after 15 months in prison. Could you tell us more about that campaign to have you released and the extent of its success?

Jarrar:  In fact, I served the entirety of my sentence in an Israeli jail. I was arrested on April 2, 2015, and released 15 months later, on June 3, 2016, which means that the occupation authorities released me at exactly the end of my sentence. In that regard, I would like to thank all those who played a role in the solidarity campaigns for my release organized by Palestinian and international human rights organizations.

Al-Monitor:  The Israeli Knesset refused to discuss your arrest in your capacity as a member of the Palestinian parliament. Do you have anything to say to them?

Jarrar:  I have nothing to say to the members of Israel’s Knesset, because when all is said and done, the Knesset is one of the Israeli occupation’s institutions. As a result, it did not issue any statements or communiques condemning my arrest, while Arab [Knesset] members had a commendable role, particularly those members belonging to the Joint List [of predominantly Arab parties] who graciously expressed solidarity with my cause and attended all my hearings in Israeli courts as well as periodically visited me in jail.

Al-Monitor:  What is your opinion concerning the effort that France is leading to resume negotiations? Can a breakthrough be achieved in light of the political atmosphere that prevails in Israel today?

Jarrar:  I do not think that French efforts will lead to palpable results. On the contrary, I view them as a waste of time and an attempt to circumvent international resolutions. Instead of the French or other similar efforts, it would be better to demand the convening of an international conference endowed with far-reaching powers, in keeping with international resolutions relevant to the Palestinian cause, which, above anything else, affirm the need to end the Israeli occupation.

Al-Monitor:  There are those who posit that Israel decided to punish you due to your strong support for joining the International Criminal Court [ICC]. Do you agree with this assessment, and are you satisfied with the pace of Palestinian efforts to join the court?

Jarrar:  Israeli authorities arrested me for many reasons, among them my membership on the Supreme National Committee for Coordination with the ICC and because I refused to abide by a decision of the Israeli occupation forces to send me to the city of Jericho [as banishment] in August 2014. Add to that the fact that I constantly visited Palestinian detainees in Israeli jails and participated in many of the political and cultural events held in the West Bank. As a result, occupation authorities wanted to distance me from my Palestinian community. As for Palestinian efforts to join the ICC, to date I have not witnessed any serious Palestinian efforts to follow-up on the dossier, which, in my opinion, demonstrates clear laxity on the part of the Palestinians.

Al-Monitor:  What are the latest developments concerning the relationship between the PFLP and the Palestinian Authority [PA] in light of the latest crisis subsequent to their dispute about the PA’s political conduct and [the] April 2016 decision [by Mahmoud Abbas, in his capacity as PLO chairman] to withhold funding to the PFLP, which exacerbated tensions between them to the point where PFLP members burned effigies of Palestinian President Mahmoud Abbas in Gaza?

Jarrar:  Irrespective of the details associated with these differences, it is clear that the situation of Palestinian division has preoccupied people with the multitude of its internal conflicts, sometimes between Fatah and Hamas and other times between other Palestinian factions that oppose one another. All these actions and practices emanate from a lack of national responsibility, particularly in light of the fact that Palestinians are passing through a critical historical and political period that requires drafting a unified strategy that transcends internal Palestinian tensions while maintaining the need for Palestinian factions to reassess their espoused political approach.

Al-Monitor:  A few days ago, a PFLP delegation headed to Cairo in order to meet with Egyptian officials. What is the agenda of the visit, and what role can Egypt play at this particular stage?

Jarrar:  As I was only released a few days ago, I am not privy to the agenda of the PFLP’s visit to Egypt, but I believe that Egypt has an important role to play on all levels and in all aspects, whether by opening the Rafah border crossing or ending the blockade imposed on Gaza. Furthermore, Egypt was a sponsor of all the Palestinian reconciliation agreements, giving it an important role on the Palestinian scene, a role that must be further energized. Egypt is a key Arab country that plays an influential part in Arab regional affairs … As such, Egypt has a leading role to play in preventing descent into such quagmires.

Al-Monitor:  What is the stance of the PFLP vis-a-vis plans for a confederation with Jordan and the annexation of Gaza by Egypt? Do you consider such options to be untenable?

Jarrar:  Palestinians unequivocally reject any confederation or federation with any Arab country. We are for the implementation of Palestinian rights to end the occupation and give Palestinians the support needed to attain their rights. While Israel tries to prevent Palestinians from attaining any of their rights, it is accelerating the pace of normalizing its relations with Arab countries, as evident by the marked weakening of the firm stances adopted by some Arabs toward Israel — which I’d rather not go into in detail — due to the existence of covert and overt relations between some of them and Israel. This requires the adoption of a united Arab stance predicated on defending Arabs and their rights, while giving Palestinians their rights through an international conference organized for that purpose.

Israel wants to give Palestinians even less than autonomous rule in return for it being recognized as a Jewish state and the abrogation of the Palestinian refugees’ right of return, all of which necessitates that Palestinians confront Israel and insist on the attainment of their just demands for independence and the end of occupation, without any talk about establishing a confederation with Jordan or Egypt and any other such plans that the Palestinian people reject.

Al-Monitor:  What is the solution in light of the failure of all past attempts to achieve Palestinian reconciliation? In your opinion, what is the next step?

Jarrar:  Unfortunately, the leaders of the divided Palestinian factions have not risen to the level of the sacrifices made by our people. Consequently, this continued state of division completely baffles Palestinian prisoners languishing in Israeli jails. For, instead of focusing on ending the state of division, Palestinians find themselves preoccupied with managing division as a result of the various interests of Palestinian political factions and their conflicts on the ground. I hereby call for an end to any talk about meetings or discussions related to Palestinian reconciliation and refer back to the national reconciliation document that Palestinian prisoners drafted in May 2006 and that the Palestinians accepted as the one to govern their national relations and political programs.

Al-Monitor:  ​What is the PFLP’s advice to the next Palestinian president? Do you think that the president will be chosen through elections or a national agreement between Palestinian factions?

Jarrar:  ​The Palestinian people have national institutions whose conduct is regulated in cases where one of their officials or leaders is absent. Here, esteem must be restored to the PLO, with a call made to convene its leadership framework, and precedence should be given to state institutions at the expense of individual considerations. Since we do not live in a jungle, the real avenue for solving the dispute about the future Palestinian president and other such contentious issues lies in holding democratic elections where permitted or resorting to national consensus if elections prove impossible to hold. The PLO must be invigorated with the entry of Palestinian factions that continue to be outside its framework, with efforts made to empower popular representation in the PLO by electing a new Palestinians National Council and Executive Committee tasked with developing the institutional role of the PLO away from interest-based conflicts and the fragmentation of the Palestinian arena.