A Palestinian reality TV show allows the public and a jury to elect a so-called president of Palestine, which shed light on the need to hold free and fair elections in the Palestinian territories. 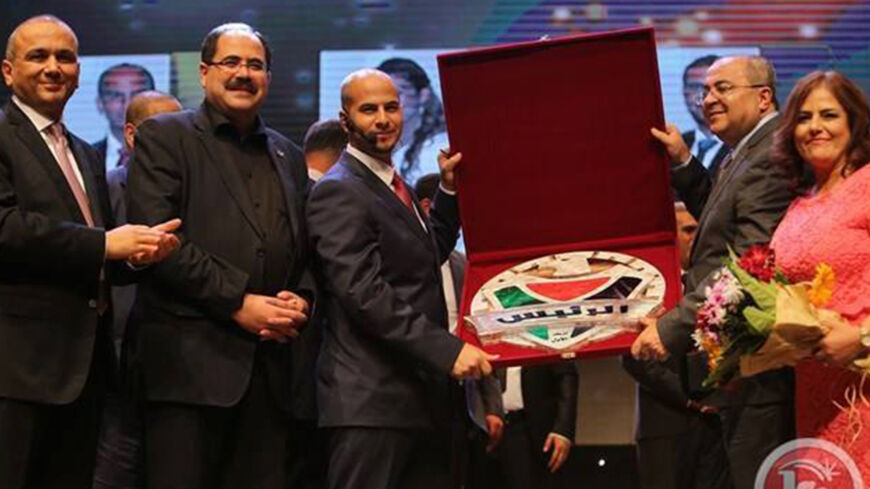 The bio of Waed Qannam reads like the perfect resume for a potential president of Palestine.

Born in the Arroub refugee camp near Hebron in 1992; graduated in law from Palestine's leading university, Al-Quds; holder of a master's degree in law from Birzeit University; and active in the Fatah movement, Qannam became a resident of Jerusalem after his father, an eye doctor, moved to the Holy City in 2002. His mother is an activist in the Palestinian women's movement and became the director general of the Women's Ministry.

Qannam's resume may have helped him reach the pinnacle of a presidential contest, but it was not the political one. A made-for-television contest that began in 2013, called "al-Raies" (Arabic for "president"), on Maan TV allows Palestinians to compete in front of a crowd and a jury made up of veteran politicians. President Qannam was "chosen" from a crowded field that included 1,180 Palestinians from the West Bank and Gaza Strip after 40 grueling episodes. The decision as to who would become the "president" was taken by a jury made up of senior Palestinian political figures and local businessmen, along with votes from the public. He was voted president on the season finale that aired June 1.

Qannam told Al-Monitor that he had watched the first run of the program back in 2013 and liked the idea because it was different than most TV-based contests. "Most shows on Arab television stations are music or talent-based; but this project allowed people to represent themselves and to develop their ideas in a public setting," he said.

Qannam noted that what he thinks made his presentation unique to the jury and audience was the holistic approach he took. "I balanced political liberation and statehood issues, including the problems of refugees and prisoners, as well as the issues of development and building of state institutions. I also tackled the issue of water collection."

Participants in the program go through eight stages. First, contestants will preside over a women's organization, a youth center and a municipality. Then they play the role of member of parliament, a Cabinet minister, an ambassador, a prime minister and finally a president. Qannam said that when he became the mayor of Hebron on the show, he came up with a water harvesting initiative that would considerably increase income for the agriculture industry.

Qannam also made a political suggestion regarding the current split in Palestine between Gaza and the West Bank. "I did some research on the reason for the failure of the 2009 Cairo Accord and discovered that it had loopholes, such as the legitimization of two security forces. My idea was to revisit the agreements with the goal of fixing these loopholes and come up with a binding mechanism that will unite the Gaza and West Bank institutions," he explained.

Qannam also suggested a plan to conduct electronic voting for the new Palestine National Council for Palestinians in the diaspora who can't physically be present at the location of the elections.

The new TV president said the exercise was a huge leap in terms of learning how to take responsibility. "Every day, I had to assume my responsibilities. This exercise made me understand better the challenges our officials are facing," Qannam said.

The television program, in its second season as it is held roughly every other year, is the brainchild of Raed Othman, the president of the Maan media network, which includes Maan news agency and Maan TV. Othman told to Al-Monitor that the aim of the program is to illustrate how badly Palestinians need elections. "We need to have elections that are held on time and regularly," he said.

Both Palestinian presidential and parliamentary elections are way overdue. President Mahmoud Abbas was elected for a four-year term in 2005, and the current Palestinian parliamentarians were elected in 2006.

Othman added that the Palestinian government welcomed the project and met all its needs with access to the various ministries for filming and meeting with officials. "We have been able to visit and film in all ministries and government offices, and President Abbas wants to meet the top three winners. He already met the winner of the first round in 2013," Othman noted.

Mohammad Daraghmeh, a veteran Palestinian journalist and the West Bank correspondent for The Associated Press, was not impressed by the show, calling the program a failure and an attempt to solidify the ideology of the ruling party. "On television, the program was boring and the contestants as well as the jury were all from the mainstream Fatah movement," Daraghmeh said.

Othman defended the program but conceded that the majority of the contestants supported the mainstream Palestine Liberation Organization. "We did have six independent contestants from Gaza, but they were voted out in the fourth round. It is true that the last three finalists are all loyal supporters of the Fatah movement," he said.

In addition to Qannam, the second place winner was another Jerusalemite, Nemeh Adawieh, and the third place winner was Fadi Kheir from Bethlehem, according to Othman. The winner also gets a car (a Chevrolet) donated from the TV program's commercial sponsor, the runners-up receive nice plaques and get publicity for being on the program.

Sabri Saidam, the Palestinian minister of education, rejected the notion that this was some kind of Fatah lovefest. "There were no restrictions on the entry of anyone, but the contestants had to win over the public. As to the claims that the program is a Fatah lovefest, Ahmad Tibi [member of the Israeli Knesset] is not a member of Fatah and neither is Ammar Abu Aker [CEO of Jawwal telecommunications company], both of whom were on the jury," Saidam said.

Other leading Palestinians who have attended or participated in the program include PLO's Hanan Ashrawi, who was a temporary member of the jury, appearing only in some episodes. The governor of Ramallah, Laila Ghannam, participated twice and was involved in the selection of the winners during the sessions she participated in. Qannam noted that neither he nor any of the participants were ever asked about their political affiliation.

According to Othman, "The President" was funded by the US-Middle East Partnership Initiative, through the US nongovernmental organization Common Ground.

Donald Blum, US consul general in Jerusalem, visited the headquarters of Maan News in Bethlehem on June 6 and met with the winners, runners-up and the Maan team. Blum described the program as "very healthy" and was quoted by the Maan news website as saying he was "impressed with the energy and enthusiasm of the young contestants."

A huge gap lies between the reality of the Palestinian presidency and the television series. Palestinians are clearly eager to have regular debates and elections so as not to be restricted in their voting for a virtual president but for a person who will have real powers that can improve their lives.