Israel and Turkey have reconciled, now what?

The renewed Israeli-Turkish relations will not be based, as in the past, on closed security cooperation, but on the convergence of interests and common enemies. 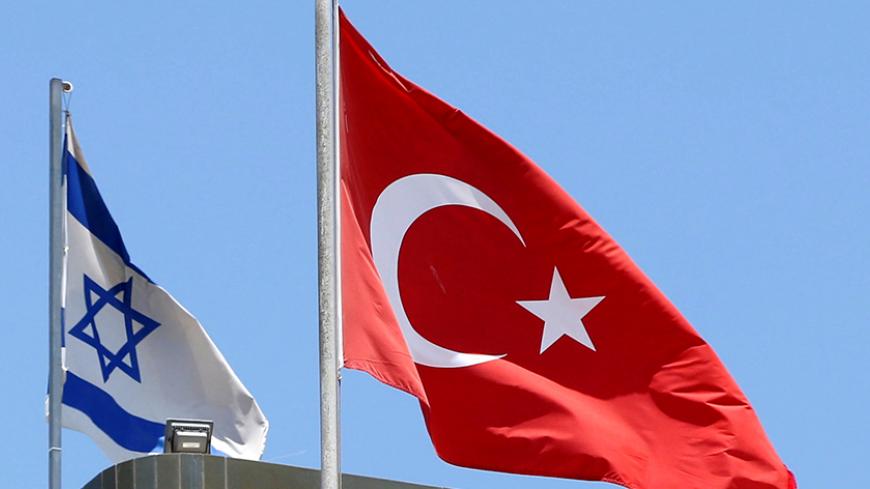 A Turkish flag flutters atop the Turkish Embassy as an Israeli flag is seen nearby in Tel Aviv, Israel, June 26, 2016. - REUTERS/Baz Ratner

The teams of Prime Minister Benjamin Netanyahu and Turkish President Recep Tayyip Erdogan finally agreed today on the details of a bilateral reconciliation agreement. But why didn't this happen three years ago? On March 22, 2013, US President Barack Obama left Israel after a successful three-day visit to Jerusalem and Ramallah. At the time, the United States and Israel were exerting considerable efforts to ensure the visit’s success. It was supposed to mark a turning point, setting Obama and Israeli Prime Minister Benjamin Netanyahu on a new and better path. It was intended to turn back the four disastrous years that preceded it.

The cherry on top was presumed to be the last few minutes of the visit. After considerable softening by the Americans, Netanyahu was supposed to call Turkish President Recep Tayyip Erdogan to apologize for the Mavi Marmara incident, in which Israeli naval commandos killed 10 Turkish citizens, who tried to break through Israel’s blockade of Gaza three years earlier, in May 2010. Obama was set to play the patron of this conversation, which would take place within hearing of a special media trailer installed at Ben Gurion Airport, just moments before Air Force One was scheduled to take off for home.

In the runup to that phone call, everything that could go wrong did, including Israeli telephone technicians not being able to get through to the Turkish leader’s office. Obama and Netanyahu were forced to wait several long minutes until Erdogan finally got on the line. That’s how it has been all along in this soiled and fickle relationship between the two former allies. In the end, the phone call took place, Netanyahu apologized and Obama was convinced that Turkish-Israel reconciliation was right around the corner.

The problem is that more than three years have passed since then. The two sides dragged their feet, pushing off the final closure of their reconciliation for as long as possible. They pondered and struggled with the painful acceptance that despite the mutual antagonism, neither country had a choice: Israel and Turkey need each other, now more than ever. Both Erdogan and Netanyahu preferred to hold their noses and ignore the background noises and the rumblings in their bellies by pursuing normalization and renewing diplomatic relations between the two countries. The alternative was worse.

No one in Israel was fooled. The relationship would never be what it once was. A close military and intelligence alliance between the two countries is no longer possible. The Turkish army is not what it once was; Erdogan stripped the Turkish generals of their authority and made them subject to his Islamic government. The chance that Israeli air force pilots would be allowed to fly “reconnaissance missions” over Turkey’s eastern border with Iran still tends toward zero. Even the tight and prolific intelligence cooperation that was once par for the course between the two nations would not repeat itself.

What we should expect is an ad hoc partnership based on common interests, shared suspicions and the kind of bargaining that one would expect to find in the Turkish bazaar. Israel and Turkey are equally worried about Iranian influence in Syria. They both share the same concerns regarding an Iranian Shiite state pressed up against the border fence on the Golan Heights and Idlib. Having many fronts and challenges to deal with, Erdogan had to cut his losses and reduce the number of unnecessary fronts. The one he opened against Israel was the most superfluous of all. And so, he climbed down from his tree, taking with him his demand that Israel lift its naval blockade of Gaza. That being said, he did receive a candy in return, with the possibility of sending goods to the Gaza Strip through the Israeli port in Ashdod, and of developing projects in Gaza. This is a win-win situation, at least as far as Israel is concerned. These kinds of projects would make life easier for Hamas and reduce the overall pressure in Gaza. This, in turn, could postpone the next Hamas-Israel round of fighting.

For its part, Israel was forced to swallow quite a few bitter pills. It apologized and committed itself to paying some $20 million in compensation for something that every Israeli considers a pure act of terror by the Turkish government. It is enabling the Hamas command center to remain in Istanbul, and it made no progress in getting back the bodies of two Israeli soldiers — Hadar Goldin and Oron Shaul, who were killed during Operation Protective Edge in the summer of 2014 — still held by Hamas.

It is true that as a last-minute gesture, Erdogan sent Netanyahu a letter in which he committed himself to doing what he can to see the two corpses returned to Israel, along with two other Israeli citizens who disappeared in Gaza. This letter was sent following a secret visit by the director of Israel’s Mossad, Yossi Cohen, to Ankara about a week ago.

Nonetheless, that letter is far from consolation for the families of the missing soldiers. On June 26, they launched an open campaign against the government, the first since their loved ones fell in Operation Protective Edge.

No country is as sensitive to the fate of its soldiers as Israel, regardless of whether they are alive or dead. Shaul and Goldin fell in Operation Protective Edge, and their bodies were seized by Hamas. The Israel Defense Forces declared them casualties, even though their bodies were not found in the field. They relied instead on forensic evidence collected at the site of the fighting; they were declared dead despite the absence of bodies, with the agreement of the chief rabbi of the IDF. The families conceded to this and even sat shiva, the seven-day Jewish period of mourning, for their lost sons. The government’s leadership had hoped that by doing this, they could “skip” the stage in which a public campaign is launched to return the soldiers, just as happened with Gilad Shalit, who was abducted by Hamas and only returned after five years in captivity, in 2011.

This hope held strong until news of the reconciliation agreement between Israel and Turkey made the news. The fact that Israel allowed the Turks to send supplies to Hamas without receiving the bodies of its missing soldiers in return enraged the soldiers’ families.

On June 26, a protest tent occupied by the Shaul family was set up outside the prime minister’s residence in Jerusalem. The family of Goldin shared similar feelings. Goldin was the nephew of former Defense Minister Moshe Ya’alon, who opposed reconciliation with Turkey all along. His successor, Avigdor Liberman, is not thrilled about the reconciliation either, but he is forced to show restraint. Liberman promised that he would not obstruct the agreement, during his discussions with Netanyahu over his appointment as defense minister.

The reconciliation began with no celebrations whatsoever. It was treated as a necessity, practically imposed on the two leaders. There is no joy at this wedding, but there is no alternative either.