Why this renowned Israeli artist wants his sculpture removed from Knesset

Famous Israeli artist Dani Karavan suggests that if Culture Minister Miri Regev penalizes those who refuse to perform in the West Bank, artists should "present texts that tell the truth about bloodshed, racism, aggressiveness and injustice." 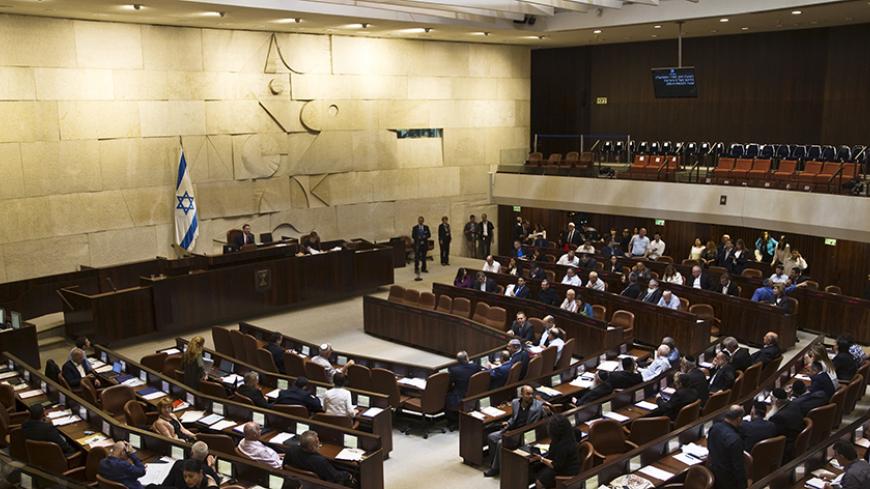 A general view shows Israeli artist Dani Karavan's Pray for the Peace of Jerusalem on the wall of the plenum hall at the Knesset, the Israeli parliament, in Jerusalem, May 13, 2015. - REUTERS/Ronen Zvulun

Few contemporary artists have their work displayed at the front of the main hall of parliament. For 50 years, heads of state, presidents and hundreds of government ministers and Knesset members have delivered speeches against the backdrop of Dani Karavan’s creation, the large Galilee stones covering the wall behind the podium of the Knesset speaker. Tens of thousands of visitors from Israel and abroad have gazed at the creation from the balcony. Karavan is now asking that his work be taken down. “Sometimes I’m ashamed of having made it,” the laureate of the Israel Prize (1977) said on June 8.

He spoke several days after becoming the first non-Spanish artist to be awarded a prestigious Catalan prize for cultural contribution. Previous recipients were the likes of Pablo Picasso and Joan Miro. The prize was awarded to Karavan for “Passages,” an artwork he created in Portbou in Spain as a tribute to German-Jewish philosopher Walter Benjamin at the site where he committed suicide.

The harsh comments made at the annual Herzliya Conference, offering a reflection stage for Israel's top politicians and intellectuals, by one of the top Israeli artists in the world were drowned out by former Defense Minister Moshe Ya'alon’s criticism of Prime Minister Benjamin Netanyahu, and the attack by former Prime Minister Ehud Barak discrediting Netanyahu.

In an interview with Al-Monitor, Karavan explained why he was ashamed of his work. “On that morning [when I made this decision], I read in Haaretz that Culture Minister Miri Regev had decided to cut one-third of the state support for theaters, musical ensembles and dance troupes that do not perform across the Green Line [in West Bank settlements]. How can one tell people where to perform and where not to perform? The state has to fund the arts with integrity, in a businesslike fashion. Without any strings, only respect for the law. There’s no law that obliges artists to perform outside the borders of the state. We’re not a dictatorship.''

Al-Monitor:  An elected government doesn’t have the right to set budgetary priorities?

Karavan:  When the State of Israel applies Israeli law to all the occupied territories and turns them into a part of Israel, artists will perform there as they do in Tel Aviv and Beersheba. But as long as an occupation regime rules the West Bank, demolishes [Palestinian] homes and wipes out the Green Line, a performance in the settlements is a violation of international law.

Anyone traveling to an occupied area to serve the occupying power could be brought before the International Criminal Court in The Hague. The day will come when states that respect international law will ban the performance of an artist who performs in the settlements. The Batsheva Dance Company, for example, is invited to perform all over the world. If it is forced to perform in [the settlement city of] Ariel due to budget pressure, it could fall victim to an international boycott. It’s enough that we have a Supreme Court justice [Noam Sohlberg] and a defense minister [Avigdor Liberman] residing in occupied territory.

Al-Monitor:  But there are theaters and artists — even those who oppose the occupation — that perform in the settlements because they cannot survive without government support. Are they simply following the herd?

Karavan:  An artist is first and foremost a human being and must act like one. If he follows his conscience and is sensitive to human rights, he must not hide it. I don’t see them as following the herd. That would be an insult to herds. I would be happy if all artists would refuse to perform in the settlements. On the other hand, it’s easy for me because I’m not dependent on anyone or government support. I don’t know what I’d do if I were responsible for 30 members of an ensemble who have to make a living. I believe I would have persuaded the group not to perform there. A moral person reading Ilana Hammerman’s book in which she describes the injustice of the occupation that she personally experienced cannot sing and dance in front of settlers. As a member of the board of the human rights organization Yesh Din, I'm exposed to this cruel reality.

Karavan:  I'm all for the Habima National Theater putting on William Shakespeare’s ‘Cornelius’ in Ariel and ‘Woman Flees Tidings’ by David Grossman, and that the [progressive] Tzavta Theater go on stage there with Michal Aharoni’s ‘Angina Pectoris.’ It’s important that actors present texts that tell the truth about bloodshed, racism, aggressiveness and injustice. There’s no need to provide the settlers with comedy shows to entertain them.

It’s true that unlike the past, there’s no censorship on plays these days. The [Tel Aviv] Cameri Theater would not have taken down Hanoch Levin’s ‘Queen of the Bathtub’ [a satirical 1970 play deriding Israel’s euphoria over its victory in the 1967 Six-Day War]. For now, authorities are content with harassing Arabic-language theaters that stage what the regime views as ‘problematic’ plays and threatening to slash the budgets of settlement performance refuseniks.

Al-Monitor:  You travel a great deal and spend much time in your Paris studio. Do you sense a change in the attitude toward Israel?

Karavan:  I feel they don’t like us. There were times in Europe when there was pride in being an Israeli. There were always anti-Semites, but they kept a low profile. Today, we provide the anti-Semites with fuel. It’s not just the occupation. [Allegedly], the biggest thief in Europe is a Jew with ties to the prime minister of Israel [Arnaud Mimran, suspected of stealing at least 282 million euros ($317 million) from the European Union].

Al-Monitor:  What has to happen for you to want to visit the Knesset these days?

I’m 85 already. It’s high time that the young artists — along with other lovers of peace and democracy — stand outside the prime minister's residence on Jerusalem’s Balfour Street and shout out loud, ‘What are you doing here and who gave you permission to cut out a grave for us here’ [paraphrasing Isaiah 22:16].