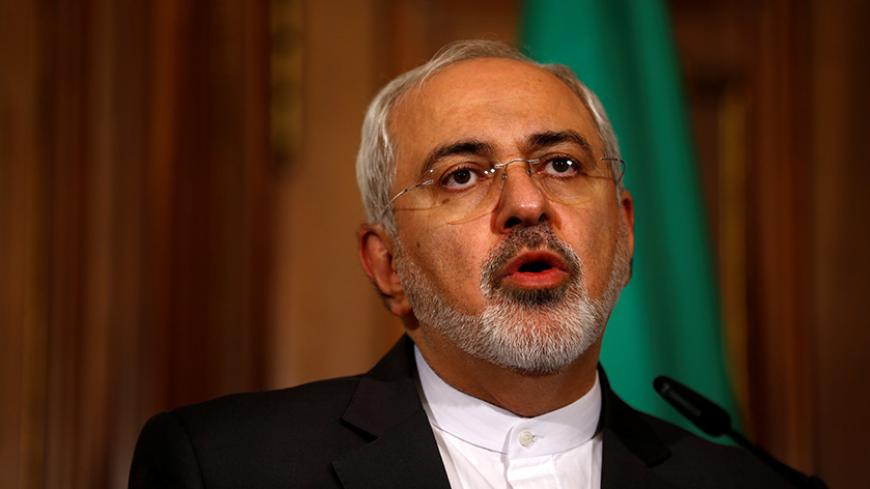 WASHINGTON — Iranian Foreign Minister Mohammad Javad Zarif, at meetings in Oslo, Norway, this week, signaled that he has more authority on the Syria file than he has had until now, and that Iran may be prepared to show more flexibility to advance a political solution, sources who met with him there told Al-Monitor.

The apparent shift in Iran's Syria policymaking comes as the Obama administration is facing internal criticism of its Syria policy, in the form of a dissent cable signed by some 50 State Department officers urging the United States to conduct airstrikes against the Assad regime in order to pressure it to make serious concessions at stalled political transition talks with the opposition in Geneva. The memo, first reported by The New York Times June 16, calls for "a judicious use of stand-off and air weapons, which would undergird and drive a more focused and hard-nosed US-led diplomatic process."

The internal pressure in both Tehran and Washington to shift course to accelerate a political settlement in Syria comes as Zarif met with US Secretary of State John Kerry on the sidelines of the Oslo Forum June 15, to discuss implementation of the Iran nuclear deal and the situation in Syria.

"What [Zarif] seemed to be signaling was that he has more authority on the Syria file than he has had until now," a US nongovernmental source who met with Zarif on the sidelines of the Oslo Forum, speaking not for attribution, told Al-Monitor. "He seemed to suggest that Iran is prepared to show more flexibility on how fast that question [of Assad] is dealt with and how."

"The Syrian crisis can be only resolved politically, and a solution to the Syrian crisis will not be achieved through military means," Zarif said in a joint press conference with Norwegian Foreign Minister Boerge Brende on June 13, Iran's Press TV reported.

"I have said all along that there will be no solution if we focus on any individual, because it is a zero-sum question that will inevitably lead to stalemate and deadlock," Zarif told Al-Monitor by email June 16, when asked about what suggestions for advancing a Syrian political resolution he proposed.

"The answer is to focus on institutional dispersion of power and the future form of governance, through which you may be able to reduce or even eliminate the centrality of the role of any individual or ethnicity," Zarif continued.

"It is very clear that the cessation of hostilities is frayed and at risk, and that it is critical for a genuine cessation to be put in place," Kerry told the Oslo Forum of his discussions with Zarif about Syria June 15. "And Russia needs to understand that our patience is not infinite. In fact, it is very limited now with respect to whether or not Assad is going to be held accountable."

"So, this is a critical moment, and we are working very, very hard to see if we can in the next, literally, week or two come to an agreement that has the capacity to more fully implement a cease-fire across the country and deliver humanitarian access in a way that then provides for a genuine opportunity to bring people to the table and start talking about a transition," Kerry said.

"But I do believe the conversation I had with Zarif indicates to me possibilities for how this could be achieved," Kerry said. "And my hope is that we will open up some political space to try to resolve … one of the most complex international challenges the community has faced in at least a generation."

The observation that Zarif appeared to be taking a larger role in Tehran's Syria policymaking with a renewed focus on a political solution came shortly after Iran's Supreme National Security Council (SNSC) announced that SNSC Secretary Ali Shamkhani had been appointed Iran’s senior coordinator for political, military and security affairs with Syria and Russia, reportedly the first time that position has existed.

The announcement of Shamkhani’s appointment came after the Russian, Iranian and Syrian defense ministers held a somewhat unusual meeting in Tehran on June 9, after which Iran's Defense Minister Hossein Dehghan announced support for a Syria cease-fire that does "not result in the strengthening of terrorists in this country."

"It is necessary that inter-Syrian dialogue replace 'war and bloodletting' in the country," Shamkhani said after meeting with Russian Defense Minister Sergey Shoigu in Tehran June 10, Tehran Times reported.

Shamkhani's appointment and putting the Syria file into the Iran interagency process may signal Tehran's deciding that a political solution in Syria may better serve its interests than extended conflict. "The Iranian Revolutionary Guard has so far been the main controller of events in Syria, but after this post, politics may have more influence," Al Jazeera's Tehran Bureau Chief Abdul Qader Fayez told the Middle East Monitor.

The shift in Iran to seeking a political resolution on Syria comes as the Obama administration faces unprecedented internal criticism from State Department officers to toughen the US stance against Assad in order to accelerate a political resolution to the five-year-old Syrian civil war that has killed an estimated 400,000 people.

Former US ambassador to Syria Robert Ford said the dissent cable was unprecedented for the number of people who had signed on, and for showing broad consensus that the current US policy focused on combating the Islamic State was failing.

"It is remarkable that they have 50 signatures," Ford told Al-Monitor in an interview June 17. "I never heard of a dissent memo with so many signatures, and that tells me that … there is a broad consensus that the current policy is failing and will continue to fail."

"There is broad consensus that there needs to be a new approach that involves pressure on the Assad government," Ford, now a fellow at the Middle East Institute, continued. "That suggests to me there is a kind of menu that includes limited US strikes, more assistance to the opposition, but all with the goal of getting concessions from the Syrian government so that you can get to a political deal."

Regarding a possible shift in Iran on Syria, Ford noted that Iran has been taking a lot of casualties in Syria, and that could be a sensitive point to motivate such a shift, but he would not expect a sudden change in their red lines on Assad.

"The Iranians are taking a lot of casualties in Syria," Ford said. "And even if the casualties are overstated … there must be a reason that the Iranians are mobilizing Afghan refugees and Iraqi Shia rather than Iranians. Clearly they are sensitive about casualties."

"But I would not presume that they are going to do a 180 very quickly," Ford said. "It could be the Iranians are more sobered by the difficulty in Syria, and [are] sort of rethinking. But the Iranians are the world's best negotiators, and they have strategic patience the Americans can only dream about. So I would not look for a radical abrupt change."

Meanwhile, State Department spokesman John Kirby, fielding numerous questions about the issue at the June 17 press briefing, confirmed the internal dissent channel memo on Syria, which he thought had been sent June 16, but he declined to discuss its contents and said its authors had chosen to make it classified.

It is "unusual" for such a dissent to have so many signatures, Kirby said, adding no one can be satisfied with the status quo on Syria, and Kerry welcomed dissenting views.