The chiefs of four banks in Iran were removed after the exorbitant salaries of senior government executives were published anonymously on social media. 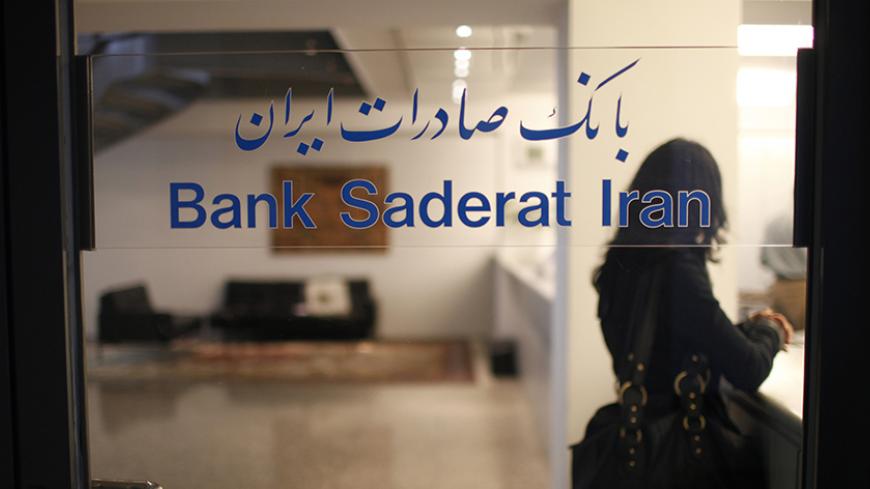 A woman waits behind the entrance door of the German branch of the Bank Saderat Iran in the northern German town of Hamburg, Aug. 18, 2010. - REUTERS/Christian Charisius

After widespread outrage that a number of government officials were receiving exorbitant salaries, the heads of four banks in Iran have reportedly been removed.

Quoting an informed source, the Islamic Republic News Agency (IRNA), which is run by President Hassan Rouhani's administration, Minister of Economic Affairs and Finance Ali Tayebnia removed the heads of Bank Mellat, Bank Saderat, Refah Bank and Mehr. According to the source, the head of another bank was also to be removed but the decision has been delayed for “further review.” In Iran, the economics minister is the chairman of the general assembly of government-run banks.

Hours before the report, Ismael Allah Ghani, the managing director of Bank Saderat, wrote a resignation letter to Tayebnia, citing “the environment that has been created in the media about the high salaries of managers.” The IRNA report suggests he was removed from his position.

The topic of high salaries first surfaced when social media accounts began publishing the salaries of senior government executives at Central Insurance of Iran (CII). Some officials were reportedly receiving $20,000-$30,000 a month. One senior Health Ministry official was receiving $58,000 a month. The base public salary of a government employee is about $400 a month in Iran. As a result of the disclosures of the high salaries, Mohammad Ibrahim Rahim, the head of the CII, resigned June 11.

Ever since the revelations of the high wages, Rouhani has been under pressure to investigate and punish government employees receiving excessive salaries. According to the IRNA report, after Supreme Leader Ayatollah Ali Khamenei met with members of Rouhani’s Cabinet and called for swift action against those receiving high wages, instructions were given by the president to remove the offending managers of the banks. Previously, on June 11, Rouhani had tasked Vice President Eshag Jahangiri to investigate the claims of high salaries.

At the June 22 meeting with Rouhani's Cabinet, Khamenei said, “On the issue of exorbitant salaries, in reality it is an attack on our values. But everyone should know that is an exceptional issue and the majority of the managers of the institutions are individuals with clean hands.” He added, “But even this few in number is bad and it certainly has to be confronted.” On Rouhani’s order to Jahangiri, Khamenei said, “This issue should not take long. Rather, it has to be seriously pursued and its results should be made to the public.”

Conservative media have been relentless in their criticism of the high wages. Vatan-e Emrooz, whose editor is former conservative parliamentarian Mehrdad Bazrpash, has covered the issue widely on its front pages. In a June 30 report, misquoting a Reformist figure, Vatan-e Emrooz wrote in their headline that there are “3,000 exorbitant salaries in the administration.” The official had not used the word "exorbitant." The Line of Hezbollah, a publication dedicated to offering interpretations and analyses on Khamenei’s positions, likened the issue of the high wages to mass protests in the United States against Wall Street that became known as the Occupy Wall Street movement.

While some Iranians may welcome the news of the removals, it is unclear how far or deep the investigations and removals of the top managers will go. Justice Minister Mostafa Pourmohammadi said during a television interview June 30 that the administration does not have supervision over some of the institutions under question. He also added that next week Jahangiri will present his first report on his investigations into the high salaries.