The US Supreme Court ruling to confiscate $2 billion worth of Iranian assets to compensate American victims of terrorist attacks has several consequences that will impact bilateral ties between the two countries. 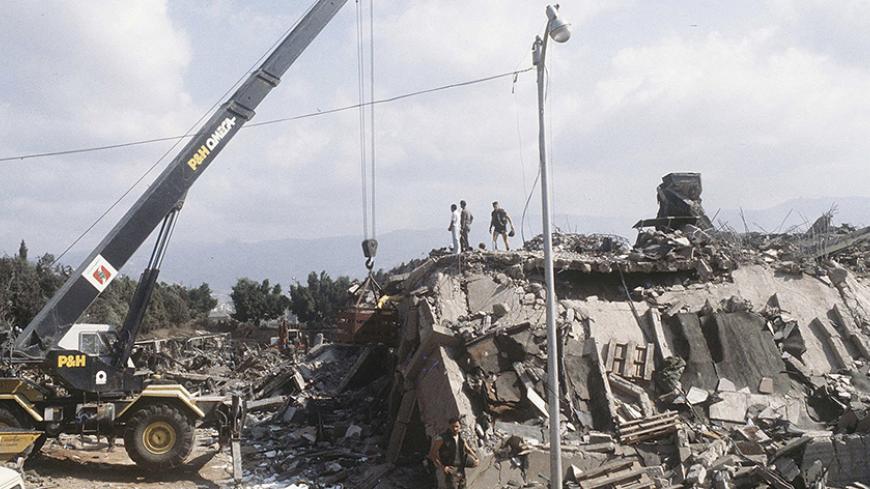 A crane is brought in after the explosion of the Marine Corps building in Beirut, Lebanon, Oct. 23, 1983. The US Supreme Court ruled in April that almost $2 billion in frozen Iranian assets must be turned over to American families of people killed in the 1983 bombing of a US Marine Corps barracks in Beirut and other attacks blamed on Iran. - REUTERS

TEHRAN, Iran — The US Supreme Court ruling to confiscate $2 billion worth of Iranian assets to compensate American victims of terrorist attacks has hit hard in Tehran. The asset seizure, which has the backing of the US State Department, has been described by Iran's President Hassan Rouhani as "blatant theft," while Foreign Minister Mohammad Javad Zarif has called it "highway robbery."

There is no doubt that the measure will have severe repercussions on the already tense relations between Tehran and Washington; its impact can be roughly categorized under four headings.

First, a "wall of mistrust" will be created. The Supreme Court ruling is causing Iranians to be pessimistic about the easing of tensions between Iran and the United States. Following the signing of the Joint Comprehensive Plan of Action (JCPOA) in July 2015, political experts were hopeful that the two countries would work toward the easing of tensions and removing this "wall of mistrust." However, with the recent Supreme Court decision, all such hope has been ruled out. This has not only empowered the opponents of the JCPOA in Iran, but also those more broadly opposed to relations with the West. This has prompted the Rouhani administration to adopt a passive approach.

Indeed, the commander of Iran's paramilitary Basij force, Brig. Gen. Mohammad Reza Naghdi, has stated, "This is not a small matter. After all the patience and flexibility to reach a [nuclear] agreement, the United States is now using something that happened 33 years ago as an excuse to confiscate $2 billion of assets that belong to the Iranian nation." Meanwhile, Rouhani has talked of the unflinching difficulties facing the relations between Tehran and Washington and likened the US Supreme Court ruling to that of a hungry cat that is greedily eyeing Iran's assets. He said, "We have had, still do and will continue to have problems with the United States. So why should we throw meat in front of a cat and not expect it to be devoured?"

The US ruling has also become a subject for puns among Iranians on social media, with one person writing, "Very soon Iran will have to pay a multi-billion dollar compensation for the diapers used by [US Secretary of State] John Kerry's grandchild," while someone else wrote, "United States! Don't pick our pocket, lift the sanctions instead."

The second impact of the court ruling is the increased prospects of the collapse of the JCPOA. Although the Supreme Court ruling is not directly linked to the JCPOA — and is in fact based on a lawsuit dating back to 2003 — these kinds of developments are often intertwined. The expectation among the Iranians following the conclusion of the nuclear talks was that all negotiating parties would cooperate based on goodwill. However, with the Iranians now viewing the recent US move as a malicious act, it will be difficult to engage in reciprocal cooperation to implement the JCPOA.

At present, the majority of JCPOA opponents in Iran unanimously agree that the Rouhani administration showed too much flexibility in regard to the nuclear file and that the US Supreme Court ruling is an indication of that. Former President Mahmoud Ahmadinejad, who represents a wide array of Principlists, has described the JCPOA as a document supplemented with evident drawbacks for Iran, the result of which has been the stealing of Iranian assets. In a statement, Ahmadinejad's office rhetorically asked, "How can Iran's nuclear rights and its facilities that are approximately worth $30 billion be thrown away — some destroyed while others left to be covered with dust — all based on vague, half promises made by the US president and his foreign secretary, without any concrete guarantee?"

Iran's Supreme Leader Ayatollah Ali Khamenei has, however, yet to take a direct stance regarding the US Supreme Court ruling. Just days before the asset seize, Ayatollah Khamenei had referred to the JCPOA as fragile, saying, "On paper the United States claims to have lifted sanctions, but in reality different steps are taken that create Iranophobia. The US banking regulations, which some European Union members are bound by, prevents them from doing business with Iran."

The third impact of the ruling is the neutralization of the grounds for trade. The neofunctionalist theory of international relations and history show that trade links can lead to bilateral political relations between nations and reduce their political differences. Considering that Iran's private sector is weak and that its economy is mainly state-run, measures such as the US Supreme Court ruling will prevent both Iran's government and its private sector from depositing even a single dollar in a bank account when there is a possibility that Iranian assets could be confiscated by the United States. This has widened the gap between the two nations and their governments, while making it easier for hard-line politicians to maneuver as they wish. According to the US Census Bureau, bilateral trade between Iran and the United States — which is largely conducted by the private sector — was worth less than $300 million in 2015, with $271 million consisting of US exports. The Supreme Court ruling is likely to decrease this figure further.

Last but not least, the US Supreme Court ruling will empower Iran's hard-liners and weaken the Rouhani administration. The seizing of Iranian assets has had a negative impact on the image of Rouhani and Zarif, both of whom have pursued a policy of interaction and engagement with the West. If measures such as the asset seizure are repeated, and Iran's economy does not experience a significant change due to previous US sanctions, Iranian opponents of interaction with the West will definitely flex their muscles in the country's upcoming 2017 presidential elections. Though Rouhani's popularity has seen no palpable change as a result of the Supreme Court ruling, it has the potential to be negatively affected. According to a 2015 survey, public satisfaction with Rouhani declined only 1% between the spring and winter of 2015, reaching 48%. Public dissatisfaction with the Rouhani administration's economic performance also declined very little during this time. Given that Iranian voters are first and foremost preoccupied with the economy, these are all warning signs that require the United States and the West to adopt more logical policies toward the current administration in Iran.