The anonymous blog that condemned Turkish Prime Minister Ahmet Davutoglu for betraying President Recep Tayyip Erdogan may be more than just a text. 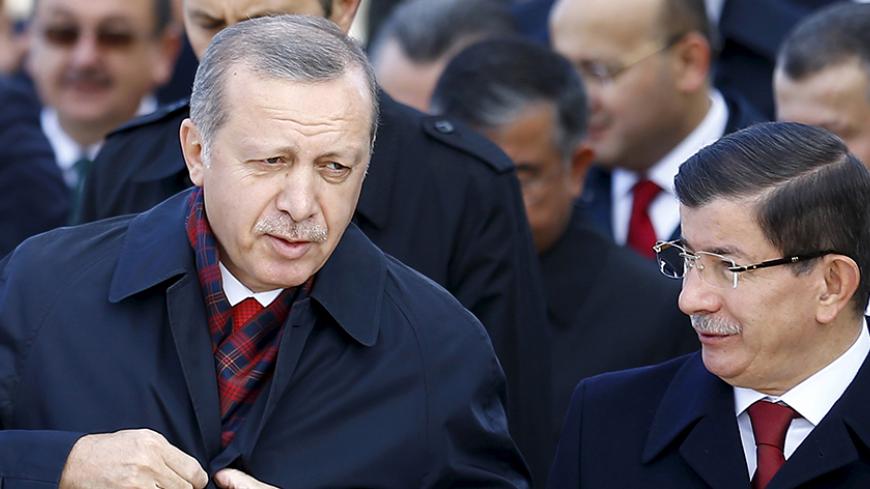 On the night of May 1, in just a few hours, a brand-new political blog became a national hit in Turkey. Titled Pelican Brief — apparently a pun on the 1993 Hollywood thriller — the site presented a single entry, which was a long diatribe against Turkish Prime Minister Ahmet Davutoglu. Its significance lay in not just whom it attacked, but also on whose behalf it appeared: Recep Tayyip Erdogan, Turkey’s all-powerful president.

The writer merely identified himself as “one of those who would sacrifice his soul for the CHIEF.” The latter word, which was used in the text 73 times and always in caps, was a reference to Erdogan. The writer was intentionally anonymous, but soon people who know Ankara well began to whisper that it was a journalist very close to Erdogan and who could have written this only with a green light from the president’s office.

The blog post began by reiterating the standard Erdoganist narrative: that there are so many conspiracies against Turkey, and the only thing that protects the nation is the wisdom and power of its president. “Ladies and gentlemen, this is an intimidating country in which every superpower is playing chess,” the author argued, only to warn, “Even if you topple one traitor here, [these superpowers] will immediately bring another one. … They will even turn our own people against us. So open your eyes and look around. And see what I see.”

Then the author went on to explain what he saw: The latest traitor — one of the cases of “our people turned against us” — was none other than Ahmet Davutoglu. For the CHIEF had blessed him almost two years ago by presenting him the seat of the Prime Ministry, but only with two simple expectations: "not to collaborate with the West" and "its Trojan horses inside," who all want to topple Erdogan, and "help facilitate the transition to the presidential system” — the system that Erdogan passionately wants.

However, the author argued, Davutoglu accomplished none of these missions. He rather gave warm signals to the West by giving an interview to the all-evil The Economist, by getting together with US bankers in New York, by trying to arrange a one-on-one meeting with US President Barack Obama and by making deals with the European Union and presenting this as his own success — despite the fact that all success lies in Erdogan. Davutoglu also “never advocated the presidential system during his electoral campaign,” and did not defend Erdogan enough in the face of the endless lies of the opposition.

Moreover, the author of the Pelican Brief blog explained that Davutoglu dared to do many things on his own, and against Erdogan’s will. Examples included Davutoglu’s effort to pass a “transparency law,” his encouraging of the four government ministers who are accused of corruption to accept to stand trial and to try to broker a peace deal with the Kurdish militants at a time when Erdogan was no longer interested in that idea. Davutoglu had also opposed the jailing of journalists and academics, which was yet another proof of his treachery.

All this Davutoglu-bashing and Erdogan-worshipping would not have made this much impact had it not come right after another crisis within the incumbent Justice and Development Party (AKP): the stripping of Davutoglu from his authority to appoint provincial party executives. This move, which simply destroyed Davutoglu’s already limited control over AKP grass roots, had also come out in a very bizarre way: On April 28, Davutoglu was on an official trip to Qatar, where he signed a deal to open a Turkish-Qatari joint military base there. But while feeling proud about this accomplishment, he got strange news from back home: All but four members of the AKP’s 50-member-strong Central Decision and Executive Board had signed a paper that took the authority to appoint district heads from the party leader onto the board itself — and the paper was authorized by none other than Erdogan.

Word has it that on his return to Ankara, Davutoglu called Erdogan and asked to meet with him to discuss this paper. Erdogan refused, saying, “It's not a big deal.” Consequently, Davutoglu had to sign the very document that reduced his authority. Then, just a day later, the Pelican Brief blog appeared.

These events led many political commentators in Turkey to question whether Davutoglu will cease to be the prime minister soon. Rumors suggest that Erdogan now prefers Transportation Minister Binali Yildirim, his right-hand man, for the job. Some even speculate that Erdogan’s real favorite candidate is Energy Minister Berat Albayrak, who also happens to be his son-in-law.

On May 3, Davutoglu gave his regular weekly address to the AKP deputies. He condemned the “virtual charlatans and libel throwers,” which was taken as a reference to whoever wrote the Pelican Brief blog post. He also said that he would “refuse all seats, but not break the hearts of his comrades.” Does this mean that he might leave his seat soon, as some people speculate? Or will this intra-AKP crisis be managed somehow, and will the current composition of the government continue?

It is hard to tell right now. But it may be safe to say that Davutoglu will be remembered in history as someone who took the job of prime minister at a very difficult time — and, arguably, tried to do his best within extremely complicated constraints.