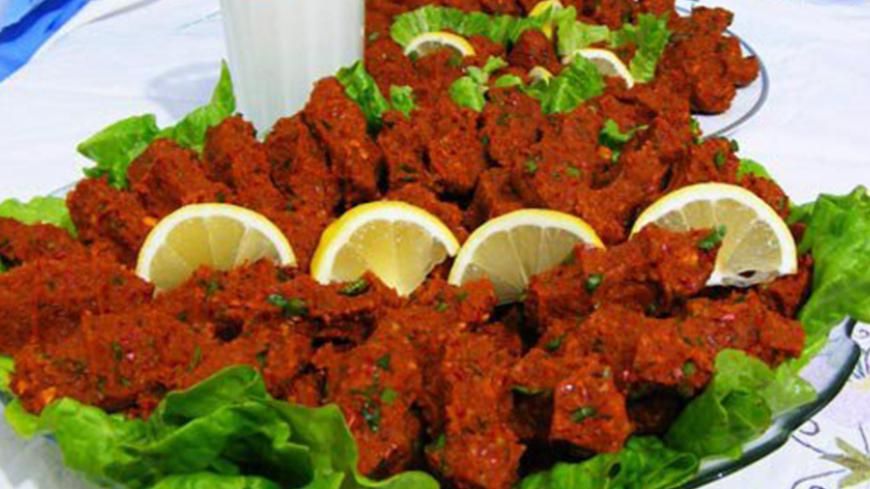 Cig kofte (literally translated as “raw meatballs”) made headlines when they became affixed to the ceiling of the National Assembly building in Ankara in 1992. Deputies of the then-ruling True Path Party had won a decision to dispatch Turkish soldiers to Somalia, and they were celebrating it with a cig kofte party in their party’s hall in the National Assembly building. To determine whether the raw meatballs were of the required consistency and blend, as per tradition they threw them to the ceiling to see if they would stick. They did. This cig kofte testing was reported by some media as “political scandal, disrespect to the parliament.”

Nowadays, cig kofte is again in the news, but this time for economic reasons — to increase Turkey’s export business in the Middle East, Central Asia and Russia.

Cig kofte is usually identified as the exclusive dish of the Sanliurfa area of southeast Turkey. It is made with slight variations of taste and shape in other provinces, such as Gaziantep, Adiyaman, Adana, Hatay, Mardin, Elazig and others.

Cig kofte is made of raw fat-free ground meat, fine bulgur wheat, onion, garlic, local chili pepper, tomato and pepper pastes, fresh onions and parsley, which are kneaded together for a long time. Making cig kofte is tiring and hard, and the cook needs a lot of patience. The bulgur has to be ground to its finest so it is not detected while eating the meatballs. It is usually accompanied with ayran, a traditional yogurt drink, or with raki, the national alcoholic beverage.

Cig kofte, which can be found in most kebab restaurants all over the country, is now slated to be the second-largest meal export to Europe and China following the globally popular doner kebab.

But with a radical change: without meat.

In 2008, Turkey’s Health Ministry banned pre-prepared cig kofte with raw meat in it in response to European Union health regulations. The raw meat has to be freshly blended, kneaded and consumed immediately. Doctors were quoted as saying that the raw ground meat caused bodily parasites, intestinal diseases and was a risk for pregnant women.

Traditional cig kofte makers tried to bypass the ban on fresh meat by using meat bouillon. The Ministry of Health then clamped stern restrictions on the use of bouillon and ketchup.

Entrepreneurs did not give up. They came up with what is known as Adiyaman cig kofte, which found a prominent place in menus without the use of raw ground meat. Most restaurants found that making meatless cig kofte is easier to produce and keep.

Meatless cig kofte chains opened in all parts of the country. Ibrahim Tatlises, one of Turkey’s most popular known folk singers, invested most of his money in the Tatlises Cig Kofte restaurant chain.

The Komagene Cig Kofte chain, named for the Commagene Empire in Adiyaman, is one of the biggest chains.

Cetin Takdemir, who gave up teaching mathematics to mass produce cig kofte, offered some interesting information about the cig kofte sector in a press conference in May 2015. He said there are about 10,000 cig kofte outlets in Turkey that employ about 80,000 workers and earn about $400 million. He produces cig kofte in plants in Istanbul and Cologne, Germany. He keeps the product in cold storage in eight locations before marketing it to Turkish and European consumers. By the end of this year, he will have 35 outlets in 10 European countries, while in Turkey he will reach 1,050 outlets. By 2020, he is planning to have 200 outlets abroad.

But controversy reigns. True cig kofte addicts insist that making cig kofte without meat is sacrilege. Former government minister Halit Dagli, owner of Adana Sofrasi, one of Ankara’s top kebab eateries, is renowned for his cig kofte, which is made fresh only for dinner and served instantly.

Furniture vendor Umit Biriken, who comes to Adana Sofrasi several times a week with his wife and children to eat the dish, told Al-Monitor: “The sudden popularity of meatless cig kofte since 2008 occurred because people don’t know the authentic one. I understand why Europeans might like meatless kofte, but I don’t understand how come it is so popular here. Raw, freshly ground meat is the honor and dignity of cig kofte. Even ‘kofte’ means meatball. Both my daughters love it. So does my wife. We do it ourselves at least once a week at home. It is a bit tiring task after a day at work, but after we mix it and eat it with glass of raki, all my fatigue disappears.”

Tatlises is well known for the cig kofte and mangal (oriental barbeque) parties he held in his hotel rooms when touring for concerts abroad.

The singer, who had to stay away from music for a long while after an armed attempt on his life, made headlines when he even found ways to consume cig kofte  in his hospital rooms in the US and Germany.

This indispensable dish for Turks will now become even more important with its expected contribution to Turkey’s exports.