Why Shiites are divided over Iranian role in Iraq

Shiites have started to act based on political orientations instead of their sectarian affiliations, which is viewed as an edge in the Shiite public awareness. 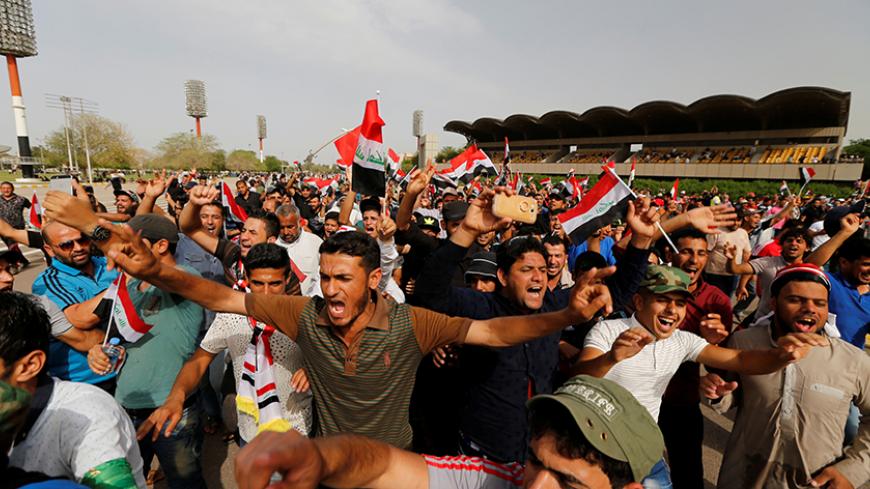 On the night of April 30, the crowd that stormed the Green Zone gathered in the Great Celebrations Square inside the zone and chanted “Iran Out Out” and “Qasem Soleimani … Sadr is a divine person,” in reference to Shiite cleric Muqtada al-Sadr. This indicates that feelings and political stances hostile to the policy that Iran has adopted in regard to Iraq since 2003 have been revived among the Shiites.

It is understandable that hatred for Iran prevails within the Iraqi Sunni community, due to sectarian considerations that are influenced by the current sectarian conflict in the region. Hatred for Iran, based on the Arab nationalist considerations hostile to Persian nationalism, which prevailed under the rule of Saddam Hussein, is also understandable.

Yet, what happened in Celebrations Square points to the unique reasons behind the feelings that prevail among the Shiites, which are supposed to be on the side of the Iranians in the current conflict.

The emergence of this new political stance away from the sectarian affiliation is an important development in the Shiite community’s political awareness, which has been a result of the Iranian bias and arrogance in dealing with the Iraqi issue after the fall of the Baath regime.

The criticism of the Iranian stances by Iraqi Shiite religious and political leaders is growing. On March 8, 2015, Ali Younesi, President Hassan Rouhani's adviser on ethnic and religious minorities affairs, said that Iraq is a part of the great Iranian civilization.

In response to these remarks, the spokesman for Iraq's top Shiite cleric Ali al-Sistani, Sayyid Ahmad al-Safi, said on March 13, 2015, "We are proud of our country, our identity, our independence and our sovereignty. While we welcome any help offered today from our brothers and friends in our fight against terrorism and thank them for it, it doesn’t mean that we would ignore our identity and independence in any way. For we are writing our history with the souls, wounds and blood that our sons from all constituents and ethnicities shed during the battles against terrorism.”

He spoke of the Iranian ambitions, saying that Iraq, as always, will be immune to any attempts to change its identity, alter its heritage and falsify its history.

In an interview with Al-Hayat newspaper on Dec. 21, 2013, Sadr criticized the Iranian role in Iraq. He said, “Qasem Soleimani is the most powerful man in Iraq,” who implements an Iranian agenda in the country. He added that there are disagreements on some fundamental issues with the Iranians.

In an interview with the Iraqi Al-Mada channel on Feb. 26, spokesman for Sadr, Sheikh Salah al-Obeidi, said, “Muqtada al-Sadr does not want Iranians to speak on behalf of Iraqi Shiites.” He added, "Muqtada al-Sadr has repeatedly said that we are with Iran, as a neighboring country that we respect, but we categorically reject any Iranian interference in the Iraqi internal affairs.”

In regard to the recent Sadrist support for the protests and sit-ins, he said, “Iranians are wary of Muqtada al-Sadr’s current moves. They are complaining that he takes decisions without seeking their advice, does not listen to their advice and always surprises them with embarrassing decisions.”

A statement on March 13 by the committee overseeing the Sadrist Movement’s protests referred to Sadr as “the Arab leader,” which points at Sadr’s attempt to separate himself from the Iranian agendas.

Critics of the Iranian role in Iraq say that Iran is embracing and supporting Shiite parties involved in corruption issues and that they have failed to manage the Iraqi government since 2003. In addition, they say that Iran is dealing with Iraq based on the sectarian divide rooted in the post-2003 period, which reinforces the sectarian rift among constituents of one people.

Ahmad Abdul Hussein, a leader of the civil protests supporting the Sadrist Movement, wrote in a Facebook post, “Iran’s insistence on embracing corrupt thugs and thieves, desperately defending them, assisting them during crises and covering up for their disastrous corruption and failure will drive Iraqis to hate Iran, in case it continues to sponsor these thugs.”

In this regard, the champions of the Iranian role in Iraq believe that Iran has provided Iraq with substantial assistance in its war against terrorism, particularly the fight against the Islamic State (IS), in the past two years.

These champions are present within the ranks of Shiite political and military organizations that were founded by Iran and receive direct financial aid, as well as political and administrative support from the Iranians such as the Badr Organization, led by Hadi al-Amiri. Those criticizing Iran consist of Iraqi Shiite groups such as the Sadrist Movement.

Nevertheless, observers have become aware that the Iranian aid to Iraq serves in the first place the Iranian security and economic interests, and does not consist of free grants offered by Iran to its neighbor.

Al-Monitor reported in February 2014 of Iraq’s intention to strike a deal to buy weapons from Iran; in December 2014, Iraq signed a security agreement with Iran involving arms deals.

A source at the General Directorate of Arming and Equipping at the Iraqi Defense Ministry told Al-Monitor on condition of anonymity that Iraq paid the price of the weapons received from Iran, as part of the trade deals, and that they are not necessarily benefiting Iraq. Some weapons are manufactured in Iran, but many are a copy of the Russian arms that Iraq ends up paying a higher price for than the originals. The source added that defeating IS would subsequently result in pushing it away from the Iranian border, and that based on this the Iranian aid to Iraq also serves the Iranian national security.

Iraqi Shiites perceive that Iran is a strategic depth for them to protect themselves from the sectarian threat posed by Sunni Arab regimes. Yet, important Iraqi Shiite forces have condemned the Iranian use of Iraq as a tool in its struggle against its regional rivals such as Saudi Arabia and Turkey, or its international rivals such as the United States. In an attempt to ward off any equivoque, they believe that their disagreements with Iran does not contradict the principle of mutual respect, taking into account both countries’ common interests.