Are Palestinians concerned over Minister Liberman?

Palestinian leaders in the West Bank and Gaza say they do not fear incoming new Israeli Defense Minister Avigdor Liberman. 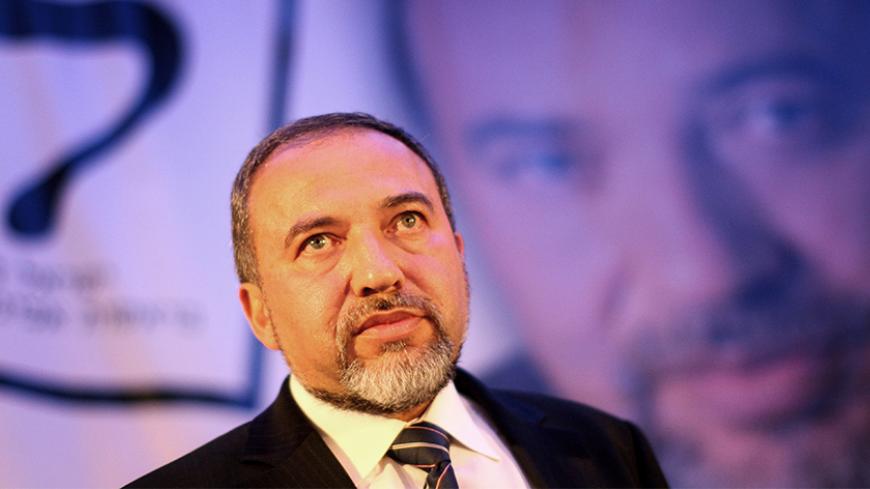 Right-wing Israeli politician Avigdor Liberman looks on as he meets with supporters at a campaign rally in Kiryat Motzkin, Feb. 5, 2009. - Uriel Sinai/Getty Images

As Yisrael Beitenu Party Chairman Avigdor Liberman enters the Defense Ministry this week, his declarations regarding the Palestinians will be put to the test of reality. Liberman has previously argued that Israel must depose Hamas rule in Gaza and even made this a condition for Yisrael Beitenu joining the Netanyahu government after the last election in March 2015.

On April 16, Liberman declared at a cultural event in Beersheba that if he were defense minister he would put a condition to senior Hamas leader Ismail Haniyeh: “You can hold me to my word,” he told the interviewer. “If I were defense minister, I would give Mr. Haniyeh 48 hours. Either return the bodies [of Israeli fallen soldiers Hadar Goldin and Oron Shaul] and the citizens [Avera Mengistu and Hisham al-Sayyad] or you die.”

With this militant declaration, Liberman proved that he totally doesn’t understand the balance of power in Hamas, and he doesn't understand that Haniyeh, despite his senior status in the movement, is not able to stand up to its military wing. Hamas, by the way, recommended this week that Liberman study the Israeli State Comptroller’s Report regarding the conduct of the government and the Israel Defense Forces during the 2014 Operation Protective Edge in Gaza.

In the past, Liberman also didn’t hesitate to declare what he thinks about the Palestinian Authority (PA) and its leader, President Mahmoud Abbas. “He’s not a partner, and you can’t trust him,” Liberman said in 2015. As operational steps he suggested stopping the transfer of funds to the PA (customs revenues) and rescinding the VIP travel documents allowing senior PA officials to enter Israel.

“Israel tried three wars, killed thousands, destroyed entire neighborhoods, and this hasn’t helped it depose Hamas,” Ghazi Hamad, a senior Hamas leader in Gaza, said this week in an interview with Al-Monitor. “If Liberman is thinking of continuing in this way, he’ll be surprised.”

According to Hamad, “Liberman is an extreme person in all respects; he has no boundaries and doesn’t think rationally. He thinks he can solve everything with force and believes that through the mighty force he’ll deploy, in words and actions, he’ll solve all problems. It’s a mistake. Liberman failed in his role as foreign minister, and he’ll fail utterly in the Defense Ministry. He will only create additional tension in the region in general and in the relationship between Israelis and Palestinians in particular. He’s a person who doesn’t believe in peace and doesn’t believe in a diplomatic solution. Liberman wants to exert force — not only against Hamas in Gaza but also against the Palestinian Authority, and that says everything about him.”

Hamad argued that people in Gaza are not scared of Liberman being named defense minister. “People here in Gaza are really not scared of him,” he emphasized. “At the end of the day, he’ll be dependent on and limited by Israeli policy.”

A., a resident of Gaza and member of one of the aid organizations in Gaza, told Al-Monitor on condition of anonymity that Gaza residents have already experienced three wars and have no fear of Liberman. “The situation in the Gaza Strip is already about to explode,” he said. “People are at the height of economic stress, and dying in an Israeli bombing is not the thing that scares them. On the contrary, more and more people in Gaza think the only thing that would bring change and guarantee a better life is an ‘explosion,’ whatever the price may be. Only in this way would you and other Israelis understand that Liberman doesn’t scare us. For us, the situation couldn’t be worse,” he said.

Hamas considers a military conflict with Israel in the near future a likely possibility. In their estimation, a conflict could break out because of an Israeli decision to attack Gaza in order to depose Hamas, as the new defense minister pronounces, or it could happen if Liberman decides to tighten the blockade on Gaza and thus draw the region into another bloody war. Gaza is usually described as a barrel of gunpowder. Now, perhaps more than ever, any tiny spark could set off an explosion.

The PA has also followed the political developments in Israel with preparedness and bewilderment. Just as the Palestinian leadership has felt that Israel’s restraint in recent months and its security cooperation have led to a decrease in tension between the two sides and a cessation of the intifada, Liberman arrives at the Ministry of Defense.

Officially the PA claims that Liberman can’t really worsen Israeli policy. According to the PA, a radical right-wing government rules Israel, which doesn’t believe in peace, which tries to destroy the two-state formula and which cultivates the settlements. So what other damage could Liberman do?

Gen. Adnan al-Damiri, spokesman for the Palestinian security services, told Al-Monitor that Israelis and Palestinians, despite all of the obstacles, the hostility and the difficulties, have arrived at a period of relative quiet. “Each side has understood how the other side works and understood their common interests,” Damiri said. “Israel learned and understood the limits of force. Now comes the bouncer, Liberman [reference to a job he held as a student], who doesn’t understand a thing about the Palestinians and wants to break all the rules. What does he want, an intifada?”

“I want to tell you and the Israelis something about my personal history,” Damiri said. “In 1988, I was in administrative detention [detained without being indicted] in the Ketziot Prison along with another 6,000 Palestinians. One day former Defense Minister Yitzhak Rabin came and met with the leaders of the prisoners. He told us, ‘I’m prepared to give you a state, but not prepared to talk with [PLO leader] Yasser Arafat. You will be able to stand at the head of the Palestinian state that will be established and run it alongside Israel. What do you say?’ We refused. We said that we are all soldiers of Abu Ammar [Yasser Arafat]. After that, he [Rabin] went and reached an agreement with Abu Ammar. I say this now, too: We are all soldiers of Abbas. Whoever thinks that deposing him would create a better situation is making a serious mistake. Liberman should do some homework before he turns everything into a battlefield.”