Gaza's first food truck brings out the hungry and curious 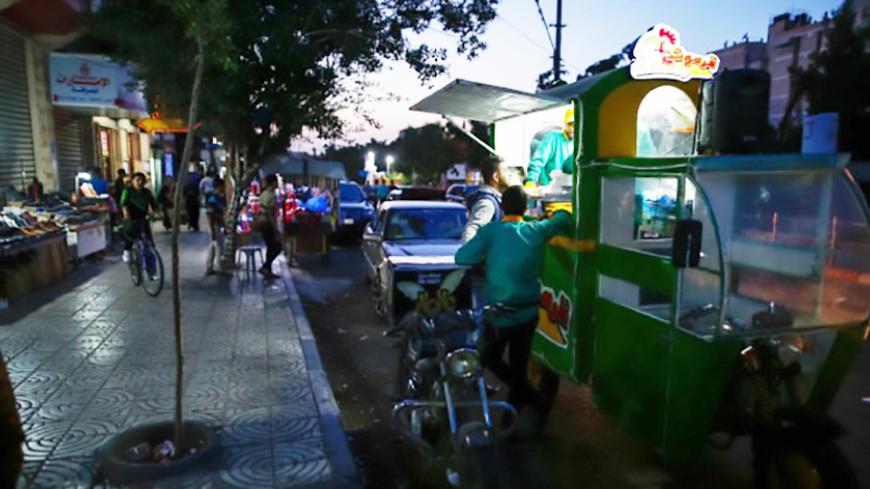 Brothers Mahmoud and Moath al-Hasnat work in their food truck on Omar al-Mukhtar Street in the al-Rimal neighborhood of Gaza City, May 5, 2016. - Motaz Alaaraj

GAZA CITY, Gaza Strip — Mahmoud al-Hasnat, 28, had hoped to find himself standing in front of a camera while holding a microphone after graduating as a journalist from the Faculty of Information at the Palestine Polytechnic University. Instead, these days, he is standing with his brother Moath, 24, behind the window of a truck they designed and turned into a mobile food caravan they named Karmoshty, which in Arabic means “bite.”

There are several fast food-related professions in the Gaza Strip, but the food truck the Hasnat brothers inaugurated March 28 is the first of its kind in Gaza. It was an emergency response to the high rate of unemployment in Gaza but inspired by practices in Europe. The brothers, proud of their business, no longer despair over opportunities lost.

Mahmoud, adding fried chicken pieces to a sandwich, told Al-Monitor, “I worked in many media and social institutions but under contracts. I never had a steady job, so I suddenly found myself jobless, and this is why we started thinking about a mobile eatery.”

Moath said that the idea came from a show on National Geographic. While watching, they noticed the popularity of trucks in European cities. “I do not deny that I initially felt ashamed, but when I saw how happy people were for us, I felt great satisfaction,” Moath said.

The brothers sell four types of sandwiches that come in different sizes, with or without cheese. All sandwiches include fried chicken marinated in their special sauce and served with fries, pickles and garlic dip. Mahmoud said, “We tried several types of sauces for our fried chicken, and in the end we decided on this one, which we consider our secret sauce. It is the one that people liked the most.”

One customer, Anas Akileh, was ordering a large sandwich when he saw Al-Monitor’s crew. He said, “We know when the food truck arrives in each area through its Facebook page, and I wait for it to buy my lunch, because I work in a shop nearby.” He praised the price of the sandwiches, noting that the most expensive one costs $2.

The truck crew consists of a driver and the two brothers, who work the truck’s window. They wear green and yellow uniforms to brand their business. A friend of theirs takes phone orders for deliveries out of an office in al-Thalatheen Street in Gaza City.

Moath told Al-Monitor, “I studied software and databases at the University College of Applied Sciences, but I did not find the right job. Many employers gave me empty promises, but no one helps youths find work. This is why we came up with this project as a family, and we are watching as it gradually succeeds.”

According to a 2015 report by the Palestinian Central Bureau of Statistics, the proportion of unemployed people 15 to 29 years old stood at 30.2%. According to gender in that age group, 25% of men and 60.4% of women were found to be unemployed. The data also showed a significant disparity between the West Bank, with 18.2% unemployment, and Gaza, with 51.5% unemployment.

Al-Monitor observed the food truck in the Midan Falasteen Square in Gaza City and in Omar al-Mukhtar Street, in the Rimal district. In both places, people warmly welcomed it. Some wanted to buy a meal, others were just curious. Still others took selfies with the food truck, given its novelty on the streets of Gaza.

Asked about expenses, Mahmoud said, “It cost us more than $7,000, which our family lent to us. The tuk-tuk, a small truck, cost us a lot, and we had to alter it on the inside to make it restaurant-like. We bought tin and wood panels and helped engineers design the space of a meter and a half in a way to fit a frying pan and a sink. We also installed a battery for our electricity usage.”

Mahmoud said that the most beautiful thing about their work is the turnout of people, many of whom ask to take selfies with them. The hardest thing, however, is the issue of gas. Every week, they need a new gas cylinder, and the municipality sometimes insists on their moving the truck, which has an official license from the Ministry of Health.

With the help of the women in their family, which consists of 14 members living in one house, every night Mahmoud and Moath prepare 9 kilograms of marinated chicken that they will fry en route to each of their destinations the following day.

“Necessity is the mother of invention” is how Moath summarized his family's experience. He called on young people to remain hopeful and to pursue their ideas, no matter how crazy they might sound, because where there is a will, there is always a way.

A few days after the two brothers began operating their truck in Gaza, Khaldoun Barghouti and Abdel-Rahman Bibi, two former prisoners in Israeli jails, started a food truck in the West Bank that they named the Food Train.

Mahmoud may not have got the chance to stand in front of the camera as a journalist, but he managed to become a subject for the media to write about and cameras to film. His brother concluded by saying, “Do not wait for your dream to come true. You have to make it come true. That's what we did.”