The Israeli bombing of the Gaza Strip and the closing of the crossings hit the animal husbandry sector in the besieged enclave particularly hard. 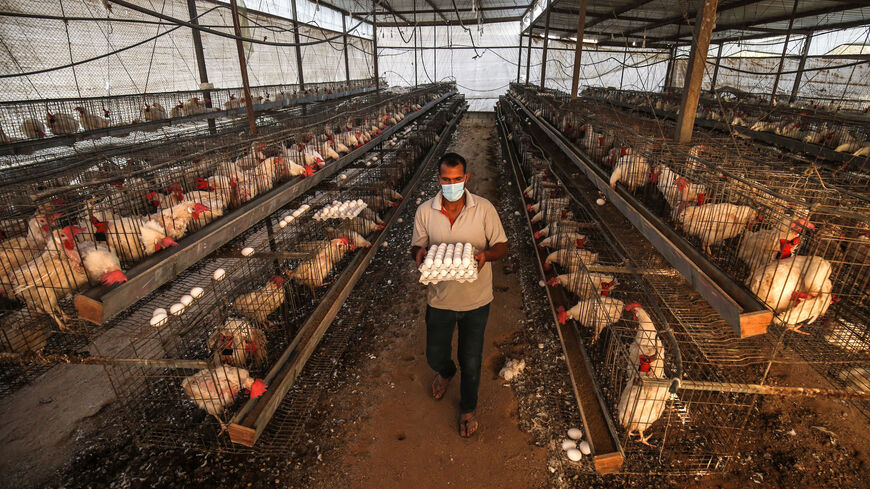 A Palestinian farmer collects eggs at chicken farm in Khan Yunis, in the southern Gaza Strip, on Dec. 14, 2020. - SAID KHATIB/AFP via Getty Images

GAZA CITY, Gaza Strip — The animal husbandry sector in the Gaza Strip has been devastated by the recent Israeli shelling. Israel closed the crossings with Gaza as soon as the escalation started on May 10, preventing the entry of fodder needed to feed the animals and many of them died.

Despite the cease-fire declared by Hamas and Israel on May 20, the Israeli crossings remained closed, preventing the entry of basic goods and commodities to the Gaza Strip. On May 24, Israel reopened the Kerem Abu Salem border crossing in southern Gaza under international pressure.

Gaza's milk and egg production has been halved and the Strip's dairy factories are unable to find enough fresh milk.

In a May 24 statement, Gaza's Ministry of Agriculture called on international and local authorities to pressure Israel to allow the entry of the vital fodder, warning of a looming disaster.

Ismail Sukkar, the owner of a cow and sheep farm who owns a cottage cheese factory in Gaza, told Al-Monitor that his farm is located on the eastern border of Gaza, only 300 meters from the border fence separating Gaza City and Israel. The constant shelling by Israeli tanks meant he could not get to his farm to milk the cows.

Sukkar said he made about 600 kilograms of cheese at the beginning of the fighting but his customers returned it, saying the taste was off. He said he had to throw it all away, explaining that the milk's acidity was too high because the cows were being milked only once a day.

He said he had to pay to transport his more than 900 calves, cows and sheep to a farm in the south of the Gaza Strip, about 15 kilometers (nine miles) from the border. He pointed out that the owners of the farm had to feed the animals the grain products they couldn't sell, wheat, barley and corn that are less nutritious than fodder.

Sukkar explained that his factory is getting some milk from other farmers, but they also are not producing enough. He estimates he's lost $22,000 so far and will continue to lose some $300 a day until production ramps back up.

Ayesh al-Shanti, director of the Livestock and Fodder Department at the Ministry of Agriculture in Gaza, told Al-Monitor that Gaza stockpiles only enough fodder for seven days. Without imports of food, Gaza lost about 1 million chickens and 500 cows.

He explained that the fodder crisis also led to a decrease in egg production. He noted that farmers had to discard more than 250,000 liters of milk that became impossible to deliver for sale to consumers or factories despite efforts by the Red Cross and the United Nations.

Shanti indicated that the factories have shut down due to electricity shortages, the workers' inability to reach them and the farmers’ inability to deliver milk.

He expects the Gaza Strip to experience shortfalls in broiler chicken soon due to the poultry losses. The crisis will continue in dairy product factories due to the shortage of fresh milk, he warned.

Mueen Rajab, an economics professor at Al-Azhar University in Gaza, told Al-Monitor that fodder is an essential commodity and Gaza cannot afford delays or stoppages.

He explained that the government must take into account the food security of animals as well as people in Gaza and develop and strengthen the local fodder industry instead of relying on imports. The Strip must begin stocking sufficient fodder reserves for several months, he said, adding, “This will mean an additional burden, but it remains the best option in light of the instability of the security situation in Gaza.”