Women who are the sole breadwinners of their families are working in the newly-opened women-only dairy factory in Rafah, in the south of the Gaza Strip. 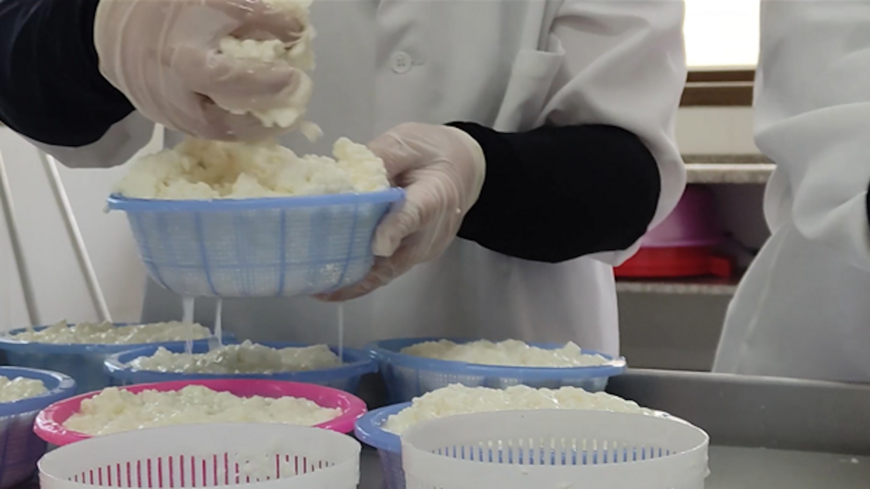 Participants in a program to help women in the Gaza Strip produce and sell dairy products work in a new factory in Rafah in this undated image. - Ayadi Tayyiba

RAFAH, Gaza Strip — A group of women in the Gaza Strip are producing dairy products from sheep and cows in the enclave’s first factory with an entirely female workforce. The factory in Rafah, called Ayadi Tayyiba (Kind Hands), opened Feb. 22 with the support of the Japanese nongovernmental organization the Pacific Asia Resource Center’s Interpeoples’ Cooperation.

The ongoing Israeli siege has caused high rates of poverty and unemployment in the Gaza Strip, especially among women. A report issued by the Palestinian Central Bureau of Statistics in February showed that the unemployment rate among women in Gaza reached nearly 60%, amounting to 225,000 in the fourth quarter of 2021.

Ikram Abu Rizk, chair of the women-only cooperative for sheep breeders leading the dairy factor project, told Al-Monitor that the project began in 2018 with providing sheep to nearly 180 women supporting households in Rafah and Khan Yunis.

Abu Rizk explained that 33 small farms were started with six women working in each. Each site was given 14 ewes and one ram. She noted, “There were criteria for selecting women; they needed to be the sole breadwinner for at least six-member families and they needed to be between 25 and 45 years old.” Each farm was soon producing six liters of milk per day.

Abu Rizk said six fields were allocated for green barley in the governorates of Rafah and Khan Yunis at a cost of $22,000 each to ensure healthy food for the sheep and reduce feeding costs.

The next step was to set up the factory and obtaining the necessary licenses to sell to a wider market. Abu Rizk noted that as many women dropped out of the program, some of the small farms were closed and the animals and workers reassigned. She said that the remaining 44 participants are now managing their own businesses and successfully providing for their families. The remaining mini farms that deliver milk to the factory, where several kinds of dairy products are produced.

The women make sweet and salty cheese, regular yogurt and a strained yogurt called labneh. Abu Rizk said that while the factory mainly relies on the milk of sheep raised in the farms affiliated with the project, it has had to buy approximately 150 liters of cow's milk per day from another farm, as the sheep do not produce enough milk at this time of year.

“We are the only factory that produces sheep's milk cheese in the Gaza Strip, so there is no [direct] competition, but demand for it remains limited due to its high price,” she said.

Abu Rizk said she is trying to promote the benefits of sheep's milk products and stressed that all products are subject to laboratory testing and modern sterilization processes.

Nafeen Tabasi, a worker from Khan Yunis who supports a family of nine, told Al-Monitor, “I received training for nearly two months in the production of dairy and cheese, during which I learned modern manufacturing techniques as well as standards of hygiene and sterilization.”

She said she used to make cheese and yogurt with five other women and sold it locally. She said she joined the program to be able to better support her family.

Tabasi said she hopes their products will someday reach all homes in the Gaza Strip and bring in more money. Her colleague Safaa Shallouf, who is from Rafah and supports a family of six, agreed. They commented that their farm is currently facing difficulties from the high price of fodder, which has risen dramatically with the outbreak of the Ukraine-Russia war.

They mentioned another challenge: societal prejudice against women who work. Shallouf said, “Society thinks we are unfit for such work and is waiting to see us fail.”

Moeen Rajab, a professor of economics at Gaza’s Al-Azhar University, told Al-Monitor that such gender-specific cooperatives are very important in advancing women in the workforce, improving their status and encouraging their creativity.

Rajab added, “Such pioneering projects have a strong impact on the national economy. These projects are part of the national product and competent government agencies must set incentives to encourage women to get involved in all fields and economic sectors, provide them with the necessary support and boost cooperation between local female business owners and local, regional and international bodies.”