How Nubian women are challenging marital traditions in Egypt

While Nubian society has opened up in ways that afford more opportunities to women, marriage to a non-Nubian man is still taboo. 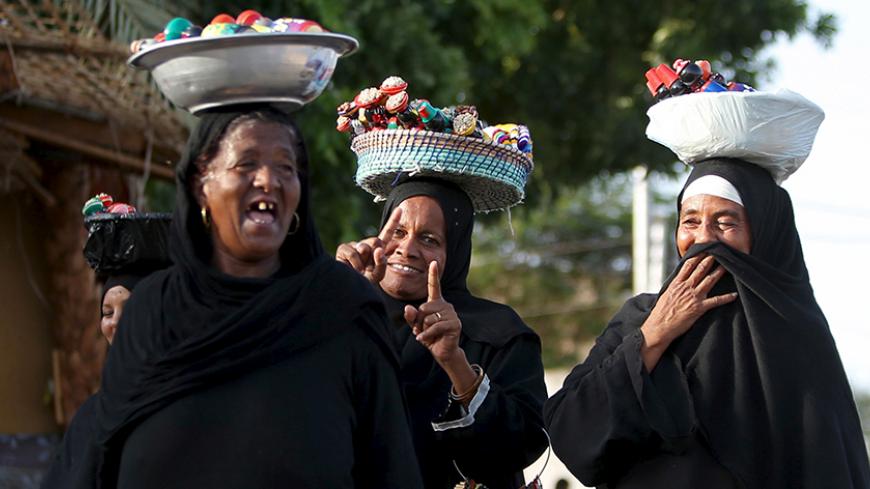 CAIRO — Some Nubian women have left their region's villages to make their own way, either by completing their studies or seeking out new job opportunities, and have succeeded in integrating into the world outside their societies. Others remain constrained by Nubia's traditional mores and customs. Still others have gradually moved away from those traditions. Nevertheless, the bonds of marriage continue to stand, as families insist that Nubian women marry Nubian men in order to preserve the Nubian heritage throughout their lives, according to accounts given by Nubian girls to Al-Monitor.

Nubia is located in southern Egypt along the Nile River and extends into northern Sudan. It is characterized by a local cultural heritage distinct from the rest of the Nile River Valley, as reflected in their traditions and customs, as well as their various forms of art and architecture. The area's geographic isolation and linguistic distinctiveness reinforces the importance of Nubian women marrying Nubian men. On the other hand, Nubian men are often free to marry whomever they desire. Some women believe in the importance of marrying a Nubian man in the conviction that they are the only ones capable of protecting them, while comparatively few are willing to embark on the difficult course of attempting to marry outside of Nubia.

Asma Mahmoud, the organizer of the Alternatives Forum in Cairo, told Al-Monitor that discussion of the issue of marriage of Nubian women outside of their societies is met with severe hostility. "I found it extremely difficult to deal with non-Nubians. All of my friends were Nubians, and I was afraid to speak with anyone else," she said. "I believed that Nubians were the greatest people on the earth, but my perspective changed, and I made friends with people from other provinces [in Egypt]."

For all that, Mahmoud rejects the idea of marrying anyone other than a Nubian, and in fact rebuffed proposals of marriage from non-Nubians. "I personally wouldn't feel comfortable if I married a non-Nubian, because they're alien to Nuba. We're a society within a society; we have our own unique songs, our own customs, and [more than that] we believe that our society is complete by itself. It doesn't want for anything."

Regarding the change taking place in the acceptance of women leaving Nubia, she said, "Few Nubians accept the idea of a woman studying or working outside of her environment, though it's commonplace to live abroad with one's husband or first-degree relative." She stressed that "there is a sharp distinction between men and women; it's incumbent on Nubian women to be at their fathers’, brothers’ or husbands’ beck and call all the time." She pointed out that "the Nubian daughter works in many areas in Cairo, but in Nubia itself, the fields [open to them] are more constrained, particularly since they marry at a young age."

Mahmoud described the current generation as "rebelling" against Nubian customs and traditions. She said the youth reject some such customs; for example, the exorbitant costs of marriage that include buying about 100,000 Egyptian pounds' ($11,300) worth of gold.

Mahmoud also believes that Nubians have responded to the racism directed against them in the Egyptian media over their skin color with a sort of reverse racism.

Wahibah Saleh, a senior archaeological inspector in Dahshur, produced a film on the Ahwal Masriyah website titled “The clash between Nubian women and marital traditions." The film discussed for the first time the battle waged by Nubian women with their families over marriage to non-Nubian men.

Saleh related to Al-Monitor the story of her marriage to a non-Nubian man. "I was looking for an independent person compatible with my ambitions, and I met a poet and journalist in the Cultural Center of Cairo, someone with an open mind. It fell on me, the task of telling my family, so I moved there for a year in order to convince them. I began my battle with my father, who refused, and I used every tool I could to persuade him." She noted that she ended up having to go to a psychologist to cope with the psychological pressures that it put her under. "I married with the consent of my family, for fear of causing a break in the home," she added.

Saleh justifies the stress that the Nubian culture lays on Nubian women marrying Nubian men, saying, "Part of the Nubian heritage is collapsing, with the demise of the language, and so the society is attempting to preserve its existence through its customs and traditions." She noted that "Nubian men think it’s preferable for a Nubian woman to marry the son of a [Nubian] security guard rather than the son of a non-Nubian minister, [even if it means] a Nubian woman with a Ph.D. might end up marrying a Nubian man who hasn't even graduated middle school."

"Lineage trumps culture, especially for society's youth: It's hard for culture to hold fast in the face of habit and custom."

Following up, Saleh said, "Nubian society is an open society from the inside. There is a great deal of integration between women and men. Women are not forced into marrying and have the right to live alone, but not to marry a non-Nubian."

She believes that the internet has succeeded in changing Nubians in a comparatively short span of years, from when it was impossible to conceive of a change in the culture and Nubians' ideas concerning women's education or study abroad.

The film she produced does not seek to encourage Nubians to opt out of the bonds of marriage from the outside. As she said, "Whoever seeks that must understand that they are fighting a long-term war." She also does not believe that the marriage of Nubian women to Nubian men is a crime, like female genital mutilation. Rather, the message she seeks to convey is, "You must choose what's right because you'll have to fight on two fronts: your family on one front and [the struggle to] choose the right person on the other."

Even though there are no Nubian women in the Egyptian parliament, President Abdel Fattah al-Sisi appointed Makkah Abd al-Ilahi Abd al-Mawli as the Nubian women's representative to the National Council for Women.

Fatima Imam, a translator, researcher and human rights activist on Egyptian women's issues, noted in remarks to Al-Monitor that Nubian women have suffered a decline in stature within Nubian society. Women once held authority and managed the Nubian economy to such an extent that men would be referred to by their mothers' names. But Imam has been saddened by the return of a chauvinist culture once again to Nubia, one of the consequences of the siege on the women's movement in the public domain and the discrimination leveled against it.

She says she was under pressure from her family because of her studies outside Egypt and was given the choice of marriage or traveling abroad. She rejected the idea that a Nubian woman must marry a Nubian man, as this only reinforces notions of ethnic discrimination.

She addresses the challenges facing Nubian women, foremost among them the issue of genital mutilation, women's weak position in political affairs and the absence of a Nubian feminist movement in the public space, as well as the Islamization of society through the imposition of abayas (loose overgarments) on women. Speaking on all of the above, Fatima said, "Wahabi culture and ideas from the Gulf have led to the Islamization of society, because many Nubians have traveled to live in the Gulf and have returned carrying Gulf ideas."