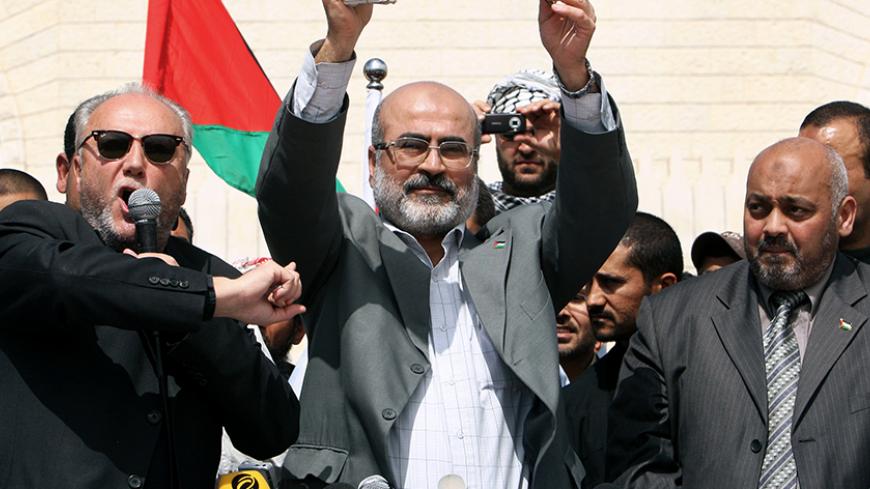 Ziad al-Zaza, the minister of economy for the Hamas government in the Gaza Strip, raises his hands next to British politician George Galloway (L), in Gaza City, March 10, 2009. - REUTERS/Mohammed Salem

GAZA CITY, Gaza Strip — Ziad al-Zaza, a member of Hamas’ political bureau and former government deputy prime minister, believes a long and rough road lies ahead to any potential reconciliation between Hamas and Fatah. Zaza met with Al-Monitor at his home in northern Gaza City on May 21 to express his opinions on this and other Palestinian and Arab issues, and to discuss the results of recent meetings between the Hamas leadership and Egyptian officials.

Zaza said the March 12-18 meetings in Egypt were positive and could help mend rifts between the country's leaders and Hamas.

"The meetings were serious, responsible and energetic, during which clearly defined and positive discussions took place. Our hope is great that these matters become reality, with the opening of the Palestinian-Egyptian Rafah border crossing to Palestinian individuals and goods. Such a development would be highly regarded by the Palestinian people, as it represents an end to the siege imposed upon them," Zaza said.

The Hamas leadership is considered part of the global Muslim Brotherhood, and there has been tension in the air since Egyptian President Abdel Fattah al-Sisi assumed leadership of the country after the ouster of Muslim Brotherhood-affiliated President Mohammed Morsi in mid-2013. Hamas was political Islam’s most important supporter of Morsi’s regime after its ouster.

Zaza, however, claimed that "there is no international Muslim Brotherhood organization" and that the issue never arose during the meetings.

"That is pure fiction, because Islamic thought encompasses all Muslims without exception, even non-Muslims espousing Islamic ideologies. But the issue of our contacts with the Egyptian Brotherhood never came up, for such a topic has no place in politics," he told Al-Monitor. "The Egyptian leadership does not raise such issues because it knows that the Muslim Brotherhood of each country is independent, and that Hamas is an Islamic movement that operates inside Palestine to liberate the land, holy places and the people."

Hamas does not have regular access to the Egyptian political leadership. Zaza said Egypt prefers to deal with Hamas through Egypt's intelligence service.

"Egypt considers its dealings with us primarily security related, but we view the issue as one affecting national security on a political, economic, social, geographic and humanitarian level, in addition to the security aspect that we are extremely keen to maintain," he said.

Al-Monitor asked Zaza about a potential reconciliation between the Palestinian political parties Hamas and Fatah following talks held in Doha at the end of March. Zaza blames Palestinian President Mahmoud Abbas for setbacks in the rapprochement process.

"The future of Palestinian reconciliation is linked to the position of President Abbas and those around him. He could achieve reconciliation in mere minutes by greenlighting the reformation of the Palestine Liberation Organization, calling for a meeting of the provisional leadership, establishing a national unity government tasked with implementing national reconciliation or reaching a national agreement under which the government fulfills its obligations toward Gaza as it does toward the West Bank," Zaza said, adding, "[Abbas] can also call for the [Palestinian] Legislative Council to convene and give autonomy to the next government. Doing so would result in the state of division ending within minutes, but the future will remain challenging if [Abbas] continues to acquiesce to Israeli security demands granted at the expense of the people’s interests."

Zaza gave examples of what he sees as Abbas bowing to Israeli security demands.

"He explicitly did so when he asked the occupation forces to grant him one week to end the intifada in Jerusalem, which violates all heavenly as well as earthly covenants, for he who stands in the way of an occupied people's yearning for freedom shall always work against their interests and for those of the occupation. Furthermore, he constantly states his keenness to negotiate with [Israel] and refuses to negotiate or engage in dialogue with other Palestinians."

Zaza added that Abbas actually boasts about not allowing the Gaza siege to be lifted, saying, "All these things satisfy Israeli security demands."

Zaza gave his outlook on Gaza’s political and economic future in light of Hamas’ de facto rule and the hopelessness Gaza inhabitants feel about solutions being found to the economic and political problems from which they have long suffered.

"Our people — and we — are suffering from the siege imposed upon us by the occupation, with domestic, regional and international complicity. I hold the US administration completely responsible for the state of affairs, because its aim is to suppress whole peoples for the sake of a handful that exploit the bounties and land of those peoples," Zaza said. "The Palestinian people shall not surrender to this fate, as admitted by the occupation leaders, who stated that they are dealing with a resourceful and determined people bent on liberating their land and obtaining their rights. The future shall remain bright for as long as this determination endures."

Zaza pointed to Hamas' record of governance in Gaza beginning in 2006 and lasting until the short-lived "unity government" was formed June 2, 2014.

"When we came to power in 2006, we — by everyone’s admission — introduced a respectable, sophisticated and unambiguous system of governance, allowing us to do away with chaos and lawlessness in Gaza, which became a security oasis and one of the safest cities in the world when it came to personal, social and political security.

"In addition, under Hamas, the people of Gaza searched for and developed their lost capabilities, achieving self-sufficiency in the cultivation of vegetables, fruits and other foodstuffs. But the blockade continues to steal Gaza’s financial resources due to the fact that under the inauspicious Paris Protocol, $90 million in monthly tax and customs revenues are appropriated by Israel with a commission deducted from it in return for security coordination in the West Bank." He added that that amount "is enough for Gaza to be independent once the siege is lifted," saying, "In fact I am prepared to promise that with said money, Gaza can resolve its problems and provide foreign countries with social contributions."

Zaza also blamed Abbas for the failure to hold Palestinian legislative elections, which he said Hamas "awaits with bated breath."

"We want to re-establish the legitimacy of the presidency, as well as that of the legislative and national councils," he told Al-Monitor. "But there are reasons why legislative elections are not being held. First, because Abbas wants them to fulfill his vision of keeping the Palestinian National Council and the PLO as they are, a burden upon the Palestinian people. Second, because Abbas formed a Central Elections Commission composed of members from Fatah without the agreement of anyone else, in addition to him forming an all-Fatah Constitutional Court."

The result, he said, is the need for an elections commission that represents all Palestinians, a constitutional court formed by a newly elected president and election laws governing the legislative and national councils, "not to mention the need to prepare an appropriate atmosphere that allows people to freely run in elections and vote."

Recently, Israel and Hamas have exchanged threats concerning Palestinian prisoners held by Israel and Israeli soldiers Hamas has captured. In light of those threats and mutual shelling, Zaza said he doesn't see much hope for even a temporary settlement with Israel.

"As usual, occupation forces are the instigators, with them recently trying to impose a new fait accompli by seizing Gazan land as they have been doing in the West Bank: unchallenged. We shall not allow that to occur in Gaza, and the new equation that they attempted to impose was rejected, with Israel realizing that it will not be allowed to seize even one centimeter of Gaza. Consequently, we expect similar aggressive behavior to take place every couple of months, which shall all be met with the appropriate response."