During the Turkish president's US visit, US President Barack Obama openly rebuked Recep Tayyip Erdogan, while Germany told him his undemocratic strong-arming won't work in Europe. 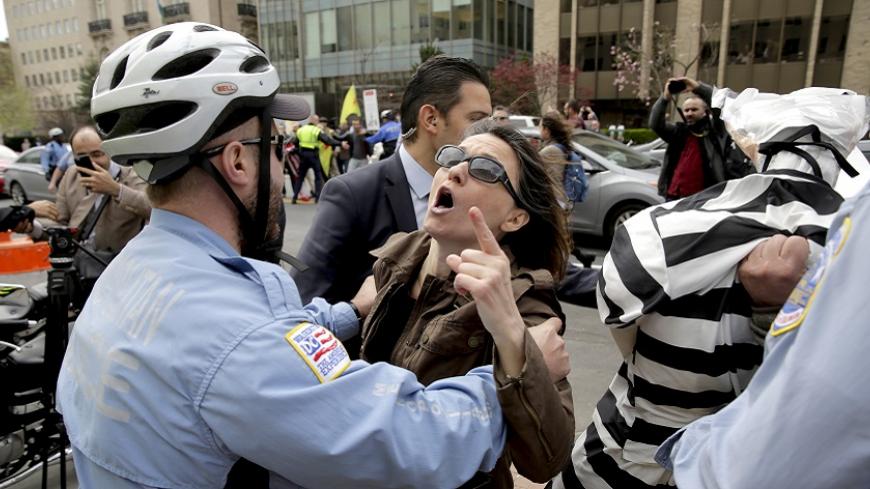 A police officer separates a protester from a member of the Turkish security detail in front of the Brookings Institution before the arrival of Turkish President Recep Tayyip Erdogan in Washington, March 31, 2016. - REUTERS/Joshua Roberts

Turkey’s international reputation as a democratic country continues to take a battering as President Recep Tayyip Erdogan tries to protect his image at home. The Turkish leader's draconian measures aimed at curbing the independent media are turning into the bane of his existence in his dealings with Western leaders and overshadowing his attempts to build an image as a respectable regional leader.

Such was the case during Erdogan’s visit to Washington last week for the Nuclear Security Summit. His advisers were more focused on securing a meeting with President Barack Obama than the summit itself following US press reports that the White House was expected to snub Erdogan because of his undemocratic steps in Turkey.

After what appears to have been much bargaining behind the scenes, Ankara eventually got a meeting with Obama, and Erdogan’s advisers hoped to use it as a photo op against critics at home. But a public rebuke by Obama regarding the state of the media in Turkey caused the plan to backfire.

Erdogan's trip to Washington came only days after he gave diplomats from Western countries, including the United States, a dressing down for attending the trial of Can Dundar and Erdem Gul, two prominent journalists who are facing espionage charges for reporting illegal arms transfers to anti-regime forces in northern Syria.

Erdogan has vowed to make Dundar, the editor of Cumhuriyet, “pay dearly” and is using his influence over the judiciary to ensure both journalists receive long prison sentences. The case has turned into a litmus test for press freedom in Turkey.

Responding to Erdogan’s attack on Western diplomats, State Department spokesman John Kirby underscored last week that US representatives would not hold back from following such cases in the future.

The incident, covered by the US media, elicited a protest from National Press Club President Thomas Burr, who said in a statement, “We have increasingly seen disrespect for basic human rights and press freedom in Turkey. Erdogan doesn’t get to export such abuse.”

The White House’s displeasure over the incident was evident in the uncharacteristically harsh public rebuke Erdogan received from Obama. Speaking to reporters at the conclusion of the Nuclear Security Summit, Obama responded to a question by underlining his concerns about press freedom in Turkey, and said he had pressed Erdogan not to curb democratic debate.

"[Erdogan] came into office with a promise of democracy, and Turkey has historically been a country in which deep Islamic faith has lived side by side with modernity and an increasing openness. And that's the legacy that he should pursue, rather than a strategy that involves repression of information and shutting down democratic debate," Obama added.

Erdogan quickly responded to Obama by expressing offense at his comments. "I am saddened that these kinds of comments have been made in my absence," Erdogan told Turkish reporters in Washington at the end of his trip to the United States. "These issues did not come onto the agenda in our talks with Mr. Obama."

Erdogan’s supporters in the Turkish media were quick to accuse Obama of lying and did not hesitate to denigrate him. “The surprise is not in Obama’s words but in his emphasis that he had expressed his concern to Erdogan’s face,” Kurtulus Tayiz wrote in his column for the pro-government Aksam.

“Obama’s tarnished reputation due to his incompetent foreign policy will be damaged further because of this. Claiming behind Erdogan’s back to have said something to his face, which he did not, shows how weak Obama’s character is,” Tayiz added. He claimed that the West was using the press freedom issue as a “Sword of Damocles” over Turkey’s head to get from Ankara what it could not secure by other means.

The attacks on Obama in the pro-Erdogan media were mainly directed at a domestic audience and failed to cover the blow Erdogan took to his efforts at international image-building.

In addition to what some are referring to as the debacle in Washington, Erdogan’s image in Europe took another hit when Ankara attempted to have a video lampooning Erdogan taken off the German airwaves. Ankara’s attempt to get a video removed from Germany’s NDR and ARD stations for lampooning Erdogan as a dictator who locks up journalists and builds huge palaces for himself also backfired.

Germany’s ambassador to Turkey, Martin Erdmann, was summoned last week to the Foreign Ministry over the video, which he was asked to explain and to ensure that it was taken off the air. Erdmann was already on Erdogan’s bad side for following Dundar and Gul’s trial.

Germany, however, rejected Ankara’s demand. Markus Ederer, the state secretary for the German Foreign Ministry, reportedly called his Turkish counterpart to say that freedom of speech was “nonnegotiable.”

European Parliament President Martin Schulz, also German, was more direct. "We must make clear to Erdogan: We have democracy in our country. That's the end of it. … Politicians must live with satire, even the Turkish president," Schulz said.

Erdogan was also reprimanded by European Commission President Jean-Claude Juncker. Mina Andreeva, his spokesperson, said Turkey’s attempt to have a video banned on German TV “doesn't seem to be in line with upholding the freedom of the press and freedom of expression, which are values the EU cherishes a lot." She added that "[Juncker] believes this moves Turkey further from the EU rather than closer to us.”

Erdogan, however, was quick to show he has no intention of changing. "Those who attempt to give us lessons in democracy and human rights must first contemplate their own shame," Erdogan told a meeting of the Turkish Red Crescent in Ankara.

He also accused the opposition media of working to spoil his US visit and suggested such activity constitutes treachery against the nation. His defiance is well received by his supporters, but does little to reduce the pressure from the West over his approach to the basic principles of democracy.

Although the West needs Turkey’s support to cope with Islamic terrorism and the refugee crisis, it is also coming under increasing public pressure not to turn a blind eye toward Erdogan’s anti-democratic transgressions.