Is Islamophobia on the rise in Turkey?

A researcher in Turkey’s southeast says radical Islamist groups and the bloodshed in Syria have fueled estrangement from Islam in the Kurdish-majority region, where Islamist-secularist tensions have simmered for decades. 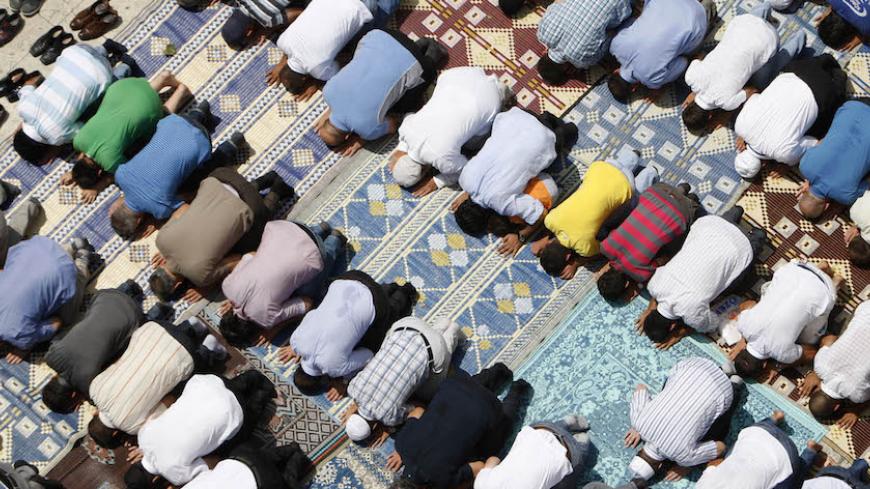 Worshippers offer their Friday prayers during the first Friday of the holy month of Ramadan at Eyup Sultan mosque in Istanbul Aug. 5, 2011.

DIYARBAKIR, Turkey — Rising Islamophobia has recently manifested itself in rallies organized across Europe by a group called Patriotic Europeans Against the Islamization of the West. Surveys show negative perceptions of Islam are on the rise in the United States as well. But is Islamophobia an issue unique to non-Muslim countries, as many might assume? Not so, according to Mehmet Yanmis, a scholar of religious sociology at Dicle University in Diyarbakir, the largest city of Turkey’s mainly Kurdish southeast.

In an interview with Al-Monitor, Yanmis said the rise of the Islamic State (IS) and its slaughter of civilians had fueled Islamophobia in Muslim societies as well, a process he believes will strengthen trends toward secularization.

“In the Islamic world, young Muslim generations with a secular education or strong political or commercial bonds with the West are being estranged from Islam, especially by the killings of civilians,” he said. “I think Islamophobia or fear of fundamentalism will become a major topic of discussion in the near future for all of us in Muslim societies, from Morocco to Indonesia. … This will encourage secularization along with modernization.”

According to Yanmis, who has been researching Islamophobia for six years and is a published author on the issue, the trend is very real in Turkey, especially in the southeast, where a bloody feud between Islamist and secular nationalist Kurds dates back many years.

The Kurdistan Workers Party, which espouses a Marxist ideology, and the local Hezbollah, a Kurdish-dominated Islamist group unrelated to its Lebanese namesake, fought a vicious war in the 1990s that claimed hundreds of lives on both sides. In later years, Hezbollah’s chilling reputation reverberated across Turkey with the discovery of so-called “grave houses” where dozens of the group’s victims had been killed and buried after being tortured. Old enmities flared anew in October 2014 as Kurdish protests against the IS onslaught on Kobani in Syria degenerated into deadly street clashes between nationalist and Islamist Kurds.

Yanmis stressed that the Kurdish nationalist movement began to nourish “antipathy” toward Islam back in its fledgling years in the 1970s, singling out the Kurdish community’s traditional religious leaders as a main cause of the Kurds' failure to obtain statehood.

“With Hezbollah’s actions in the 1990s, the fear that was already there reached new highs,” Yanmis said. “In my past interviews with young, educated people, some would say they did not wear the headscarf, did not pray publicly, or shunned religious groups and symbols [because] they feared being labeled as Hezbollah sympathizers.” Others, he added, would even say they were “socialists,” “humanists” or “liberals” to mask being practicing Muslim believers.

“The secular groups’ continued use [of critical rhetoric] has also been an important factor. Because of the region’s [conservative fabric], they cannot target religion directly, so they are criticizing Islam indirectly through criticism of the actions of fundamentalist groups,” Yanmis said.

He stressed that negative perceptions of Islam among Kurds have been reinforced by the Justice and Development Party (AKP) government with the massive security crackdowns on urban Kurdish militants since last summer.

“I think Islamophobia will be much stronger in Kurdish-populated regions. There are the recent examples of Hezbollah and IS, which the Kurds experienced first hand. A recent study of ours shows that an important segment of young Kurds also blames the security operations on the AKP, which they similarly identify with religion. So in the eyes of young Kurds, all four forces that dealt them blows in the past three or four decades are Muslim forces,” Yanmis said.

Though the blame may sometimes be misplaced, the academic expects “serious soul-searching” in religious quarters in the coming years. “The picture becomes even gloomier for them given that traditional religious authorities in Kurdish society have lost their old power and the modern religious groups that have come to replace them don’t seem so strong as to fend off all this,” he said.

According to Yanmis, Islamophobia appears in different forms in Turkey. “We keep discussing the West, but in Turkey we have Shariaphobia and reactionary-phobia. Those are the names of Islamophobia in our country. It’s all the same,” he said. “Especially in communities where religious tradition has weakened, young people, business people, and social and political elites are wary of Islam and opt for secular identities and lifestyles.”

Pointing to the different faces of Islamophobia in the West and Muslim-majority countries, Yanmis said, “In the West, we speak mostly of hatred for Islam because of fundamentalist attacks. In the Muslim world, this is manifested as an estrangement from Islam — first by shunning religious symbols and rituals and then, perhaps as an ultimate form, estrangement on the level of faith.”

Comparing his past and recent research, Yanmis said that Hezbollah and IS had produced similar prejudices against religious groups among Kurds. After the Hezbollah experience, people would report reluctance to send their children to Koranic courses or to grow beards. “Now, many say they feel distant from Islam after seeing IS,” he said.

“We are not supposed to make generalizations out of some specific examples, but hearing all this stuff from various quarters leads one to think that this is a social phenomenon and that Islamophobia is on the rise among Kurds. We could well say that IS has several times amplified the Hezbollah effect,” Yanmis said.

According to the researcher, the slaughter of civilians is the main reason fanning Islamophobia in Muslim societies. “Salafist groups have turned to killing civilians in recent times. Earlier, they would kill soldiers of the United States or Britain, which they see as colonial powers, or people they saw as collaborators,” he said. “Islamophobia is fueled mostly by the killing of civilians, Islam’s constant association with radical groups and the counter-propaganda of [local] secular groups.”