The collapse of Iraq's Shiite alliance 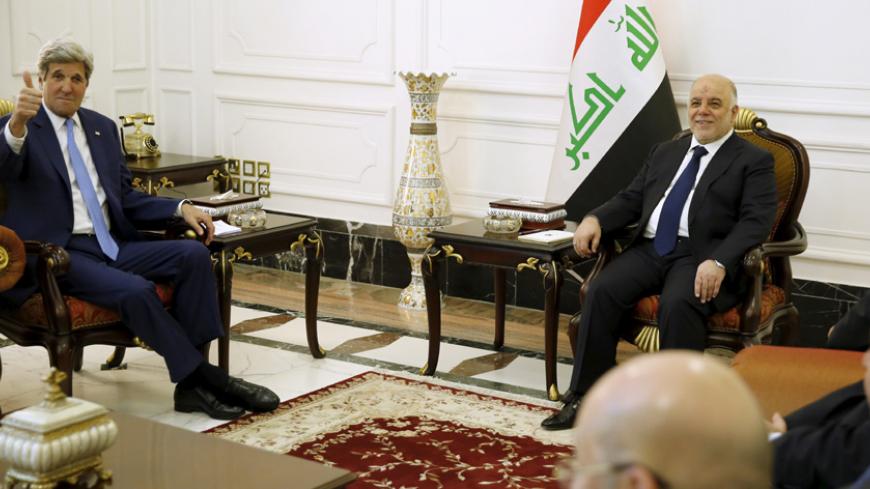 US Secretary of State John Kerry made an unannounced visit to Baghdad on April 8-9 to offer support for Prime Minister Haider al-Abadi, who finds himself increasingly isolated among Iraq’s Shiite political and clerical leadership.

In response to popular demands for reforms, including a challenge from resurgent Iraqi cleric Muqtada al-Sadr, Abadi submitted a proposal for a streamlined technocratic Cabinet on March 31, which Iraq’s Council of Representatives, or parliament, was to consider by April 12. Iraqi politicians across the political spectrum, including in the Shiite alliance, claim that Abadi did not consult political leaders and groups in making these selections. Abadi’s list faces steep resistance in the parliament, and even if it passes and the prime minister gets a reprieve, the pressure will be even greater on him to produce results.

Ali Mamouri analyzed the breakdown in consensus among Iraq’s Shiite parties, which have until now been organized under the Iraqi National Alliance grouping. In July 2015, widespread popular protests broke out demanding reform, accountability and improved services. The demonstrations were originally neither sectarian nor religious, but they have since been co-opted by Sadr, who has re-emerged as a formidable political rival to Abadi and other Iraqi National Alliance leaders, as described by Adnan Abu Zeed.

Abadi’s failures to enact reforms, deliver services and build meaningful political alliances has led to his alienation from the religious leadership in Najaf, which has refrained from its previous statements of support for the government. As Grand Ayatollah Ali al-Sistani stepped back from the political fray, Sadr and former Prime Minister Nouri al-Maliki intensified their bids to replace Abadi. Sadr has also rejected Iran’s mediation and is seeking to ride a nationalist wave of resentment against both American and Iranian interference in Iraqi affairs.

As Mamouri explained, “Political differences among Shiite parties and currents themselves have moved from disputes among politicians to the street — diplomatic language has changed to direct threats. Sadr called for massive sit-ins in front of the Green Zone, to protest against corruption and government performance. He even embarrassed his Shiite rivals within the alliance. These sit-ins started March 18 and have expanded. Remarkably, Sadr threatened to break into the Green Zone in case the government did not fulfill its demand to replace the current government with a technocrat government. In contrast, the State of Law Coalition [led by Maliki], which represents a majority within the Shiite alliance, issued a strongly worded statement March 16, saying Sadr’s call for protests is illegal and unconstitutional. The statement ended with a warning, or even a threat, that ‘weapons will be faced with weapons, and men will be faced with men. The people, the country, particularly areas that Islamic State [IS] gangs failed to destroy, would be the biggest loser. Resorting to the street is a mistake that will end up destroying the country and community.’”

Mohammed Salih reported that Abadi’s reform initiative has also deepened divisions between Baghdad and the Kurdistan Regional Government. The Kurdish parties in the Iraqi parliament — the Kurdistan Democratic Party, the Patriotic Union of Kurdistan, Gorran and Komal — have buried the hatchet over differences in Erbil to mostly band together in opposition to Abadi’s efforts, which they claim do not accurately take into account Kurdish interests. Nizar Saleem Numan Doski, Abadi's nominee for minister of oil, has said he will not accept the nomination if he does not have the support of Kurdish blocs in the Iraqi parliament.

Mamouri concluded, “All this reveals that the Shiite alliance has lost its political dynamics to resolve differences. The Shiite forces have moved their internal dispute outside the Shiite circles. Besides, traditional forces such as the highest Shiite authority and Iran have failed to mediate and limit the dispute based on common sectarian foundations.”

Kadri Gursel this week explained why we should not expect even a cease-fire, let alone a political settlement, in the Turkish government’s war against the Kurdistan Workers Party (PKK).

According to Gursel, Erdogan’s bid for an empowered, more authoritarian presidential system is linked directly to the increasingly costly civil war. Erdogan assured the Turkish electorate in November that he and the Justice and Development Party were best positioned to deal with the PKK terror threat.

“But now,” Gursel wrote, “Erdogan finds he cannot deliver his promised solution. The terror threat shows no sign of easing, and the number of combat deaths increases daily. Erdogan is trying to persuade the public to accept the security forces' fatalities by constantly invoking the significance of ‘martyrdom’ in Islam. He never misses an opportunity to emphasize how the PKK is suffering disproportionate casualties.”

Gursel continued, “Erdogan will submit to the parliament a draft constitution that calls for an authoritarian presidency. If the draft goes through parliament, we will have a constitutional referendum. If not, Erdogan’s game plan calls once again for early elections. While passing through these phases, Erdogan cannot reach an accord with the PKK without risking the nationalist votes he badly needs. He would also jeopardize his plan to keep the pro-Kurdish Peoples’ Democratic Party below the 10% vote threshold in an early election. Because of all this, one must accept the reality that Turkey will continue to live in a civil war environment of great risks. As long as the war rages, the cost of a potential political settlement will continue to rise, regardless of whether Erdogan attains his ideal presidency — which actually means a dictatorship.”

Free Syrian Army forces, backed by Turkish artillery and US airstrikes, reported victories over the Islamic State (IS) in Rai, Syria, this week, a sign that Erdogan is feeling the pressure to finally step up in the fight against the terrorist group.

Fehim Tastekin reported that the United States has rejected Erdogan’s direct appeal for the United States to back off its support of the People’s Protection Units (YPG) in favor of Turkish-backed units, perhaps accompanied by Turkish troops, which would likely provoke an escalatory intervention from Russia. The United States still considers the Syrian Defense Forces, made up primarily of Kurdish YPG units, as well as some Arab and Turkmen fighters, as the most effective group battling IS.

Nonetheless, the United States urgently seeks a victory of its own following the Russian- and Iranian-backed liberation of Palmyra by Syrian government forces, which may be poised to make a major assault to retake Aleppo. On that score, the United States would likely welcome Turkish military coordination against IS, as seemed to happen in Rai.

Nonetheless, Turkey’s adamant opposition to Syrian Kurdish autonomy foreshadows more, not less, trouble ahead and a likely increasing divergence in US and Turkish Syria policies. Tastekin concluded, “IS infiltration of Turkey through the 60-mile border gap, the role of those infiltrators in terror operations in Europe and the relocation of some of them to Libya have made Ankara’s game-spoiler attitude unbearable. Washington, which has promised Ankara there won’t be a Kurdish corridor, feels it has to do something. Americans don’t think Ankara’s demands that Arab tribes should be separated from the YPG are workable. Washington isn't in favor of US air support to Turkish-supported forces on the ground, which would then be allowed to control the Menbic-Jarablus line. We will now wait and see how the United States — squeezed between its NATO ally Turkey and the Kurds, who are achieving results with their organizational and operational capacity — will make do with interim formulas.”

Shahira Amin this week described a growing backlash against the Egyptian government’s targeting and detention of journalists.

“Egyptian officials have repeatedly rebutted claims that journalists are being targeted as part of the crackdown on dissent, insisting that there are no journalists behind bars for their work,” Amin wrote. “Until recently, much of the Egyptian media and the majority of Egyptians had also rejected international criticism of the restrictions on the media in Egypt, perceiving the criticism as ‘part of the foreign conspiracy to destroy Egypt.’”

But the Egyptian government’s actions against independent journalists have finally worn down the official denials. “There has been an almost abrupt turnabout with more journalists — including regime loyalists and those who had previously practiced self-censorship — becoming increasingly vocal in their criticism of ‘the muzzling of journalists through intimidation tactics’ and ‘the unfair detention of writers and researchers,’” Amin explained. “The string of prosecution of writers, researchers and activists, the travel bans imposed on several human rights defenders and the escalating crackdown on civil society organizations have all combined to cause the major shift in public opinion and the change in the tone of the media. Add to the above the restrictive anti-protest and anti-terrorism laws stifling freedom of assembly and expression and the repeated media blackouts on issues of public concern. Hence, it is not surprising that there was an angry eruption at the prospect of yet another journalist being convicted. The regime clearly has not learned the lesson from [former President Hosni] Mubarak’s unplugging of the Internet during the 2011 uprising — a move that fueled the anger against the former dictator, leading to his ultimate overthrow.”