How much support does IDF soldier charged in Hebron shooting really have?

The rally supporting the IDF Hebron shooter attracted only a small crowd, while the majority of Israelis side with Defense Minister Moshe Ya'alon and IDF Chief of Staff Lt. Gen. Gadi Eizenkot. 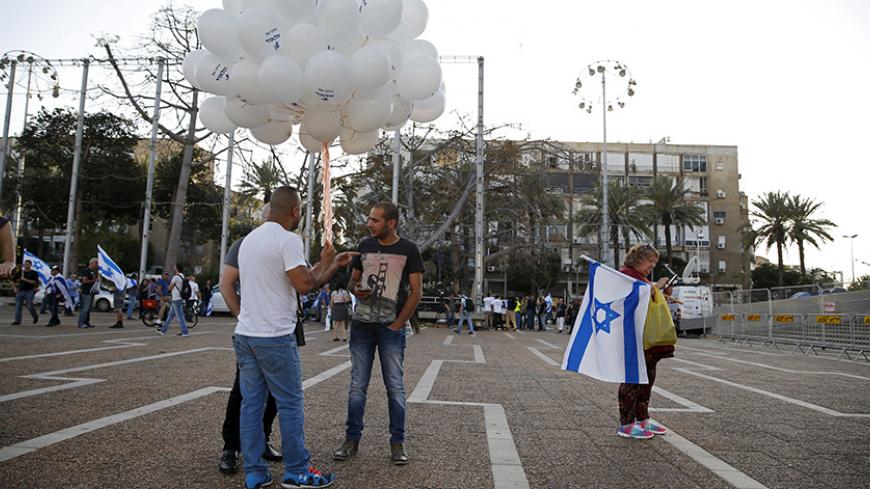 Supporters of Elor Azaria, an Israeli soldier charged with manslaughter by the Israeli military after he shot a wounded Palestinian assailant as he lay on the ground in Hebron on March 24, hold balloons in a protest calling for his release in Tel Aviv, Israel, April 19, 2016.

Tel Aviv’s Rabin Square has been the site of many large demonstrations. It has been the venue of rallies by the right and the left in favor of a deal with the Palestinians and against, of protests on ideological issues of principle and of socio-economic turmoil, but the most bizarre of them all was the April 19 rally in support of the soldier who killed a wounded Palestinian in Hebron on March 24.

I came to Rabin Square to see with my own eyes what kind of people would turn out and whether Elor Azaria, the soldier who shot and killed the wounded Palestinian assailant, had truly become a national hero, or whether it was simply an illusion created by right-wing activists on social media.

Only a few thousand people came, far fewer than the 20,000-strong turnout anticipated by the organizers. And more than a rally of support for the soldier, it was a show put on by a controversial television host who took cynical advantage of the detained soldier’s distraught parents.

Sharon Gal, formerly a Channel 10 reporter and anchor who was forced to resign over claims of inappropriate conduct, was recruited by the Yisrael Beitenu Party of former Foreign Minister Avigdor Liberman prior to the March 2015 general elections. He made it into the Knesset, but after only six months decided that he had exhausted his political contribution and stepped down. During his short term, Gal was mostly responsible for several highly publicized clashes. At a Knesset debate about the Breaking the Silence human rights organization, he was removed from the plenary after dubbing the leftist Knesset members of the Meretz Party “a gang of collaborators” and “criminals.”

Since stepping down he has been presenting programs on Channel 20, a clearly right-leaning and nationalistic television outlet, a pulpit from which he conveys militant messages to his viewers. As soon as the video shot by a B'Tselem activist surfaced, showing Azaria shooting and killing the Palestinian assailant in Hebron, Gal and Channel 20 launched a campaign to free the soldier from detention. But apparently the media campaign did not suffice and Gal came up with the idea of leaving the studio and holding a support rally at Israel’s “demonstration central” — Rabin Square.

There was no extra lighting, no huge banners, no giant television screens and no busing of protesters; there was only a small, dark stage and the keynote speakers were the soldier’s parents. Although his channel aired its messages over and over before the event and urged viewers to take part and express their support for Azaria, during the event Gal was forced to explain that the turnout was low because there had not been organized busing. The low turnout did not prevent him from screaming, “The people of Israel have enlisted, they came to embrace. … Elor, our bother, you are in open detention [at a military base, not in jail] so you can clearly see. Look, the people are behind you.” I looked around me and didn’t see this people.

The protesters carried handwritten signs saying, “Brother, the people are with you” and “An incapacitated terrorist is a dead terrorist.” Many of the placards were directed at Defense Minister Moshe Ya'alon, who has been openly critical of the shooting and of those who support it. “Anyone who encourages violations of the law to please a handful of violent radicals,” Ya'alon wrote on his Twitter account March 27, “will lead us to anarchy.” The rally participants were outspoken in their views of the defense minister and his remarks. They booed every time his name came up. And one sign that was lifted higher than all the others left no doubt as to the extent to which Ya'alon had become the butt of the protesters’ hatred: “Every stinking Arab who comes to slaughter Jews must be killed. It’s not the soldier who strayed, Mr. Ya'alon, you went astray and also failed.”

Young people wrapped in Israeli flags congregated near the stage reserved for the media and camera crews, shouting “Death to the Arabs” over and over. Gal tried to calm them down. “Friends,” he said, “we are only here to give a hug. A message of peace.” Afterward he added, “They tried to say that we are organizing a counterprotest. But we’re not against anyone; we only came to embrace Elor and to tell him that we will not abandon him.” The crowd understood exactly to whom the organizer was referring and started shouting, “Bogie [Ya'alon] go home,” “Bogie is a traitor” and “Bogie, assume responsibility and quit.”

Gal apparently understood that he would have a hard time silencing the calls against the defense minister and changed the subject, praising the soldier’s parents, Oshra and Charlie Azaria. “They are regular parents, salt of the earth,” he told the crowd, who could barely see the couple because of the poor lighting and absence of magnifying screens by the stage. But Gal did not have their best interests at heart — only his own. The parents, who have every reason to be worried about the fate of their son who stands accused of manslaughter, were simply a tool in the one-man show of the megalomaniac television presenter who toyed with their feelings. “Look, the people of Israel are enlisting for the sake of your son, all the people,” he yelled.

When the soldier’s mother walked onto the dark stage to speak, she choked and sobbed. Her voice broke when she told the crowd how her son insisted on serving in a combat unit and contributing to his nation. The crowd started chanting, “She is great.” Then the soldier’s father went up and shouted to the crowd, “I love you.” When someone shone a light on him, he shouted, “I love the people of Israel.” The father, who was apparently taken in by Gal’s misleading message that the protest included all the citizens of the state rather than a radical minority, said to his son in a broken voice, “Look, all the people are here.” Then he corrected himself and said, “All the sane people.”

The rally clarified many facts that would likely not have come to light were it not for the grandiose project of the controversial television presenter. Gal, who had hoped to fill Israel’s national demonstration square with citizens supportive of him and of his message justifying a soldier who shot to death an injured terrorist, found out that the vast majority still respects the rule of law and morality.

The feeling that the right sought to create, mostly on social networks, as though most of the Israeli public supports the soldier and regards him as a national hero, was proven to be a fallacy that night on Rabin Square. It turned out that the people do not support a soldier who deviated from the straight and narrow, and instead stand by the efforts of the defense minister and chief of staff to preserve the moral values of the Israel Defense Forces. By the way, Prime Minister Benjamin Netanyahu was not mentioned at the event — for better or for worse. He, as we know, would rather not antagonize the right wing, and since the shooting has tried mostly to steer clear of the controversy. So far, successfully so. ​