Palestinian officials claim that Israel is refusing to participate in the Committee on Incitement because of its interest in maintaining its own campaign of incitement. 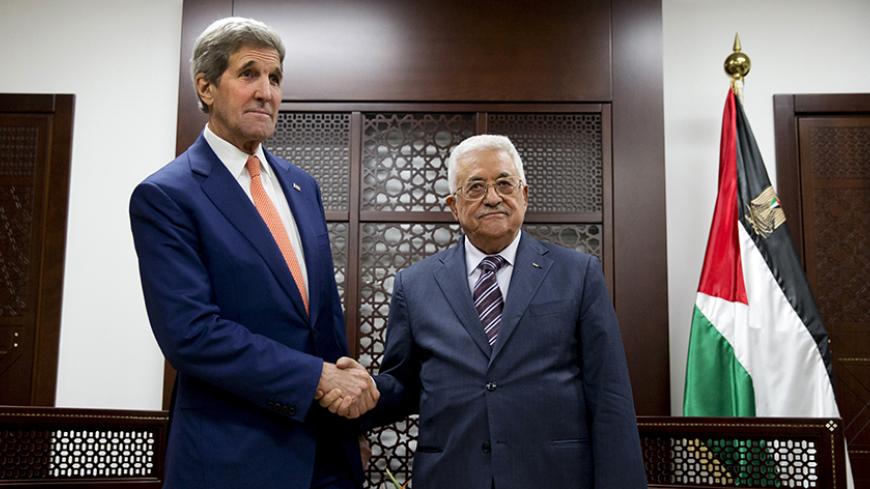 US Secretary of State John Kerry (L) shakes hands with Palestinian President Mahmoud Abbas at the start of their meeting at the Muqata in the West Bank city of Ramallah, Nov. 24, 2015. - REUTERS/Jacquelyn Martin

RAMALLAH, West Bank — In light of repeated Israeli accusations that the Palestinian Authority (PA) has been inciting violence through the media, especially during the recent popular uprising, Palestinian officials want to convene the Tripartite Committee on Incitement. The committee’s main task is to monitor the content of Palestinian and Israeli media and school curricula to detect incitement by either party against the other.

Headed by the United States and consisting of Israeli and Palestinian representatives, the committee was agreed to in the Wye River Agreement of October 1998 and reaffirmed in the 2003 road map. Only a few meetings have ever been held. In February 2014, Israel rejected a PA request to convene, demanding a Palestinian confidence-building measure before agreeing to participate.

On April 5, during a meeting with a Romanian delegation at the Muqata in Ramallah, Palestinian President Mahmoud Abbas called for reviving the committee, saying, “We have no objection to the forming of this committee to monitor incitement by both sides. As soon as the Israeli side approves the committee, we are ready to participate in it.”

Hammad added, “We have sent letters to former President George W. Bush, and we have talked with President Barack Obama, Secretary of State John Kerry and Vice President Joe Biden during his recent visit to Ramallah, but they did not respond. They know that Israel has hampered the committee’s work and refuses to activate it, which requires more US pressure on Israel.”

The PA has repeatedly denied recent Israeli accusations that the PA is inciting against Israel. Of note, during an interview with Israel's Channel 2 on March 31, Abbas said, “I declare that I am against murder and violence. And now you say that I am inciting violence! Why do you say I am inciting? At every opportunity, we emphasize that we are against escalation or spreading hatred. I admit that we have incitement, but you also have incitement.”

Amin Maqboul, secretary-general of Fatah's Revolutionary Council, told Al-Monitor, “The call by President Abbas [for the committee] came in response to Israeli accusations that the Palestinians are inciting, which is untrue because the main inciter is Israel, through its deputies, ministers and media. The convening of the committee is a Palestinian demand aimed at countering Israel's claims. … We realize that the United States and Israel will not respond positively to President Abbas’ call. The United States and Israel are complicit in not activating this committee in order to cover up Israeli incitement against the Palestinians.”

Ahmed Majdalani, a member of the Palestine Liberation Organization's (PLO) Executive Committee, told Al-Monitor, “Israel doesn’t want to activate the US-headed Committee on Incitement because it doesn’t want international involvement in monitoring the implementation of any bilateral agreements with the PA or the PLO. Israel prefers to deal solo with these agreements, with nobody monitoring or pressuring it, not even the United States. Abbas wanted to refute Israel’s claims, make it face its responsibilities and confront the Americans with their responsibilities in accordance with the agreements signed between the Palestinian and Israeli sides. We insist on the activation of this technical and specialized committee, not just to showcase the incitement in the Israeli media, but to examine the school curricula so that everyone sees who is doing the inciting.” Majdalani called Israel’s accusation of incitement by the PA a form of political blackmail.

Writer and political analyst Ahmed Rafiq Awad, told Al-Monitor, “[Abbas is acting] out of a desire to signal to Israel, the Europeans and the Americans that he is against incitement and to refute the Israeli narrative, which says that the popular uprising is triggered by Palestinian incitement, not the continued occupation, and also to monitor Israeli media, which is full of incitement, so that Israeli politicians and journalists would stop blackmailing the PA on this matter.”

Awad did not rule out European, American and Israeli pressure on the PA regarding actual incitement in the Palestinian media and on the need to stop it. Abbas, he said, is trying to tell them that if they want to monitor the Palestinian media, they should activate the joint committee. Awad believes Abbas’ call will pass unnoticed because Israel wants its media to continue inciting.

For now, the committee is not operating, like many other parts of Israeli-Palestinian agreements. Palestinian officials charge that Israel selectively implements what suits it and ignores the rest.