President Mahmoud Abbas seems to be working to punish and pressure his opponents, by halting their monthly stipend and establishing a High Constitutional Court. 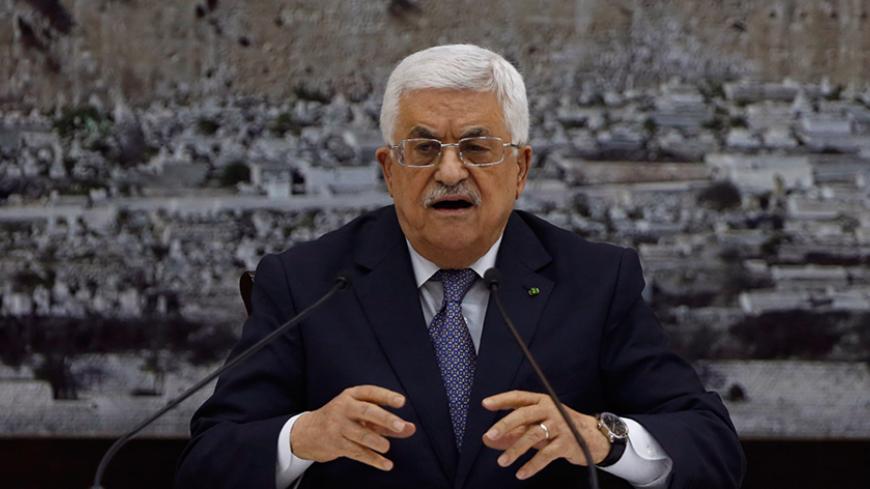 The amount allocated to each front is estimated at $80,000 per month and is disbursed for meeting various expenses and salaries. Similar amounts have been spent since the 1970s for all national forces at the PLO so that they would not pledge allegiance to foreign parties that might support them, according to a leader in the leftist local party who spoke to Al-Monitor on condition of anonymity.

Talal Okal, political journalist at Palestinian newspaper Al-Ayyam, considered the decisions to form a Constitutional Court and to suspend the financial allocations a reflection of an individual system of rule. He told Al-Monitor, “Tyranny has become the political rule in the West Bank and Gaza Strip.”

Okal noted that the president recently signed several laws that were later suspended due to the public protest, such as the Social Security Law and the Law of the Palestinian Supreme Council for Media. This indicates monopolization of decisions and lack of democratic mechanisms.

Hamas also objected to the decision to form a Constitutional Court and condemned the fact that “most of its members are from Fatah, which makes it a partisan court.”

Head of the Palestinian Center for Policy Research and Strategic Studies, Salah Abdel Ati, told Al-Monitor that the constitutional principles narrow down the cases in which the executive authority can intervene in the Constitutional Court. Resorting to this privilege should be exceptional. He said, “The executive authority’s intervention is an exception that should not be overdone. It only happens to face an imminent threat that cannot be addressed without taking quick and exceptional measures. This is known as an urgent situation that cannot be delayed.”

In 2014, Abbas expanded his special privileges to form a Constitutional Court when he introduced amendments to the 2006 Constitutional Court Law No. 3. The amendment text read: “The president of the court and its judges are appointed through a decision taken by the president of the Palestinian National Authority [PNA] in consultation with the chairman of the Supreme Judicial Council and the minister of justice.”

The DFLP had a less violent reaction, as it thought the financial allocations were delayed as usual, according to member of the political bureau Talal Abu Zarifeh. But the Palestinian National Fund soon asserted to the front that the allocations were suspended, and Zarifeh told Al-Monitor during a meeting at his office, “This is an erratic and erroneous decision that aims at disturbing national relations.”

Zarifeh considered these allocations a right acquired through a decision from the Palestinian National Council rather than a donation. He said that the decision to suspend the monthly stipend stems from disputes with Abbas and aims at pushing the front to make compromises, especially after it sided with the people in the teacher strikes and opposed the social security law.

Abbas had taken over the presidency after winning in the 2005 elections and succeeding Rawhi Fattouh who was speaker of the PLC and interim president of the PA in the wake of Yasser Arafat’s sudden death. Abbas has been president ever since, and no new elections were held after the end of his first four-year term.

Political journalist at NPAA Press Akram Atallah told Al-Monitor, “The president is categorically getting rid of his opponents. Member of parliament Mohammed Dahlan, former Prime Minister Salam Fayyad and former Secretary of the PLO Executive Committee Yasser Abed Rabbo are a few examples. Abbas is casting the same spell now on the two fronts and on Hamas through a constitutional decision.”

However, Atallah is at peace with the decision to form the court. He justified this by saying, “If anything happens to the president, the worst is yet to come. According to the law, Dweik would be president, but he is detained by Israel. As a result, his deputy Ahmad Bahr in Gaza would become president. But Bahr is a member of Hamas, and the West Bank authority will not acknowledge a president from Hamas. As a result, there would be two presidents — most likely Saeb Erekat in the West Bank, as he is a member of both the central and executive committees in the PLO, and another president in Gaza.”

Moussa Abu Malouh, dean of the faculty of law at the University of Palestine, considered the decision to form the Constitutional Court unjustified. He told Al-Monitor, “We should have held elections first. Everybody now, including the president, is illegitimate since their terms have expired and elections are yet to be held.”

Malouh called on the president to protect justice rather than oppose it, amid several complaints against many judges that Abbas chose to be part of the court. But it seems these calls will fall on deaf ears. Abbas is still strongly adopting the Big Brother policy in punishing his opponents. This brings back what Julius Caesar said while invading the Gaul region, upon receiving the Roman senate’s decision to dismiss him: “The die is cast.” With his decisions, Abbas has indeed cast the die and things may have passed the point of no return.