Palestinians pop up in Panama Papers

The Panama Papers included many names from the Palestinian Authority, an institution already facing widespread allegations of corruption. 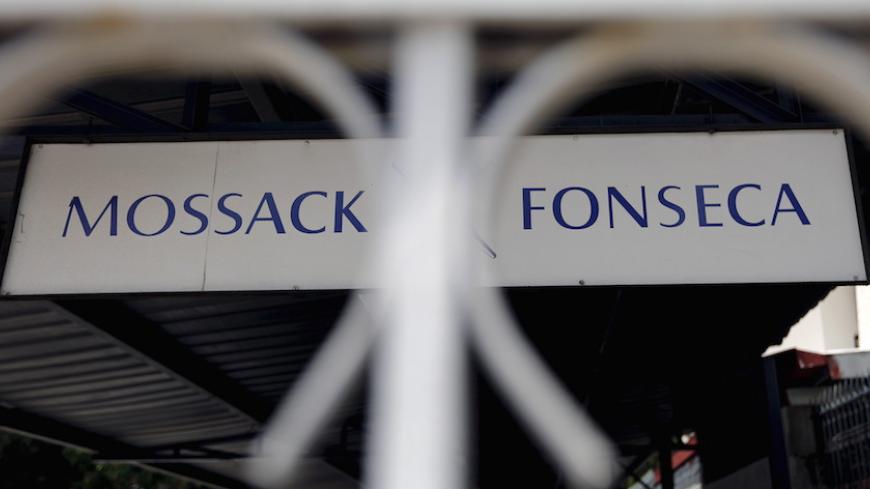 Mossack Fonseca law firm sign is pictured in Panama City, in this April 4, 2016, file photo. Mossack Fonseca is at the center of the Panama Papers scandal. - REUTERS/Carlos Jasso

Ever since the inception of the Palestinian Authority (PA) in 1994, local and international organizations have repeatedly issued reports on the rampant corruption plaguing its ministries and departments. The problem is not limited to administrative and financial excesses committed by irresponsible individuals for personal motives, but rather is seems entrenched in the PA's structure.

The most recent corruption case was revealed by the so-called “Panama Papers,” which were published April 4. The Panama Papers exposed the involvement of international figures in tax evasion and money laundering.

Tareq Abbas, the son of Palestinian President Mahmoud Abbas, was among the Palestinian names contained in the papers. According to these documents, Abbas secretly owns, in partnership with the PA, a holding company worth more than $1 million in the British Virgin Islands.

Mohammed Mustafa, the former Palestinian deputy prime minister who resigned in 2015 and current head of the Palestine Investment Fund, was also on the list, as was the Arab Palestinian Investment Company (APIC), one of the largest companies in Palestine with more than 1,500 employees.

Mohammed Abu Giab, the editor-in-chief of al-Eqtesadia magazine, told Al-Monitor, “The credibility of the Panama Papers is unquestionable — some Palestinian figures and companies associated with the PA are laundering money. I recently learned that some diplomatic action is being taken on the international level following the disclosure of the Panama Papers in a bid to investigate these figures’ involvement in these excesses. The documents will have a dramatic impact on two levels. The first is political, as the PA might face international pressure and accountability regarding its role in the use of funds out of the view of international eyes. The second is economic, as international efforts to revive the Palestinian economy could slow down. However, no Palestinian judicial actions have been taken to investigate the issue.”

The disclosure of the Panama Papers coincided with the results of a Palestinian poll that were issued on April 4 by the Palestinian Center for Policy and Survey Research in the West Bank. The poll found that 79% of respondents believe there is corruption in the PA.

Al-Monitor contacted Mustafa’s office and has received a written explanation stating, “The information contained in the Panama Papers with regard to my membership in the APIC is no secret and is even available to the public. It surprises me that some media outlets have brought this up with no grounds, and I call on these outlets to stick to their ethics, to stay away from vague intimidating headlines and to rely on original sources and concerned individuals.”

Corruption in the PA is driven by the clientelism that governs relations within its institutions and departments and gives the Palestinian ruling elite a strategic tool to control the popular bases and expand its network of supporters by redistributing public resources and buying political allegiances. These methods have enabled the PA to maintain the status quo, dominate political and economic assets, and implement its political agenda without facing any effective opposition.

Al-Monitor contacted Rafiq al-Natsheh, chairman of the PA’s Anti-Corruption Commission, but he said he was not sufficiently informed of the Panama Papers’ content to comment.

Meanwhile, Azmi Shuaibi, the coordinator of the Coalition for Accountability and Integrity, stressed on April 8 the need to investigate the names contained in the Panama Papers.

Yahya Moussa, the chairman of the Oversight Committee in the Legislative Council, told Al-Monitor, “The PA provides a perfect environment for the emergence of corruption, as it carries out security tasks in favor of Israel in return for the international community’s overlooking its corruption. This turned [the international community] into a partner in the corruption as it turns a blind eye to the economic monopolies practiced by President Mahmoud Abbas, his family and associates, and allows them to manipulate the economic aid coming from donor countries.”

Al-Monitor repeatedly tried to contact Tareq Abbas, but to no avail. However, a Palestinian political official close to Abbas told Al-Monitor on condition of anonymity, “What has been published in the Panama Papers is part of a campaign against both the president and his family. This campaign goes in line with recently published Israeli allegations aimed at tarnishing his image and promoting corruption charges against his family without any supporting legal documents. The president does not have to respond to every piece of news being published here or there.”

The Israeli newspaper NRG ran an article on March 12 on what it views as the Abbas family's ill-gotten fortune. On April 10, Haaretz accused Palestinian officials close to Abbas of using their government posts to further their own personal interests.

For his part, Tarek Aggad, chairman of APIC’s board of directors, announced April 8 that the company is subject to the authority of the Palestinian regulatory authorities, which publishes financial reports, and has paid more than $1 billion to the Palestinian Ministry of Finance in taxes, customs and fees. He also noted that its employees do not have any interests that could be considered monopolies. The president's son is one of the company’s executive directors, and his salary and benefits have been allocated from the company’s budget since 1999, as is the case with the rest of the staff, he added.

Adel Samara, a Palestinian political author and the editor-in-chief of Kanaan Online, told Al-Monitor, “The Panama Papers confirm that the PA is a nongovernmental entity, that corruption is entrenched in its structure, that it receives money to keep the Oslo Accord with Israel in place and that it carries out business [deals] publicly in a way that 'legitimizes corruption.' Meanwhile, the donor countries do not exercise control over the PA. This brings us to the conclusion that the disclosure of the Panama Papers will not affect the continuation of international support for the corrupt PA, as this support will continue so long as the PA is committed to its political project with Israel.”

The Panama Papers may have highlighted some of the heavy corruption plaguing the PA, such as money laundering and tax evasion, but there are many more problems, including the direct theft of public money, the receipt of bribes in exchange for government services, the involvement of high-level Palestinian officials in private commercial companies, the ownership and transfer of government land to officials, world travel at the PA's expense and the appointment of relatives in government jobs.