Former Iran negotiator says he would not have signed nuclear deal

As obstacles from the remaining US sanctions continue to impede European business with Iran, domestic critics have argued the nuclear deal has had no benefits. 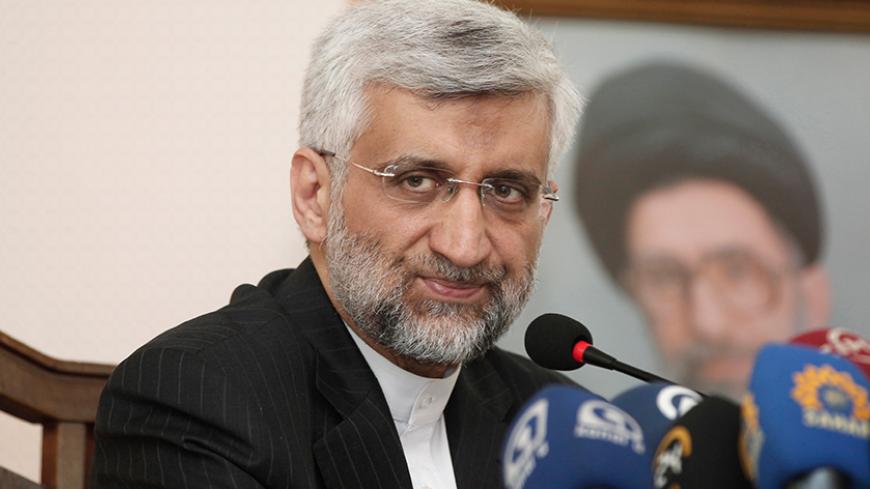 Three months after the implementation of the comprehensive nuclear deal between Iran and six world powers, Iranian critics of the deal say the United States has failed to live up to its commitments.

During an April 11 speech in northern Iran, former nuclear negotiator and 2013 presidential candidate Saeed Jalili outlined what he viewed to be the failures of the nuclear deal. Addressing the law that President Barack Obama signed canceling the Visa Waiver Program for European citizens who are dual nationals of Iran, Jalili said, “From the day the deal was accepted until its implementation, not only were laws not passed to remove sanctions, but they put limitations on visas for Iranians. Therefore, our pessimism was shaped by a realistic view.”

Criticizing President Hassan Rouhani, who urged critics to not forgo the opportunities brought about by the nuclear deal to engage with the world, Jalili suggested it was other countries blocking these opportunities, asking rhetorically, “Who is not allowing this opportunity to be used? Who is obstructing it?” One of the main problems for Iran has been that European countries remain uncertain about the remaining US sanctions on Iran not related to its nuclear program. On April 11, Treasury Secretary Jacob Lew said that the United States would not allow Iran access to its financial system.

Although Iran’s nuclear negotiators have explained this in the past, many continue to be confused by the different sanctions. During the question and answer session, Jalili explained that according to the nuclear deal there would be “primary” and “secondary” sanctions, and that only the secondary sanctions were related to the nuclear program and only they would be removed. Jalili also said that if he had been elected president, he would not have signed the nuclear deal because his “ideas are different than the people who signed them.”

Ayatollah Mohammad Taghi Mesbah Yazdi, the spiritual father to the hard-line Endurance Front political bloc, also argued there have been no benefits from the nuclear deal. “The supreme leader said many times he is not optimistic about the nuclear deal, and today we essentially see that the red lines have been crossed and also it has had no benefits.” He accused the Rouhani administration of using fear tactics to push through the nuclear deal, saying that the alternative was war.

While there certainly have been fears for European companies wishing to do business with Iran, it would be unrealistic to say that the nuclear deal has had no benefits. Rouhani responded to critics April 4, saying, “Those who talk about the nuclear deal have apparently forgotten … if it wasn’t for the deal today, we would not even be able to export one barrel of oil.”

Even critics of the deal have reaped benefits. Vatan-e-Emrooz newspaper, which has staunchly opposed the nuclear deal, praised the first steps of the delivery from Russia of the S-300 missile defense system, a delivery that Russia likely would not have made if Iran and the world powers did not come to terms over its nuclear program.