Israel issued a decision allowing some Palestinians living in Jerusalem and the West Bank to reunite with their families in Israeli cities, but security concerns may undermine it. 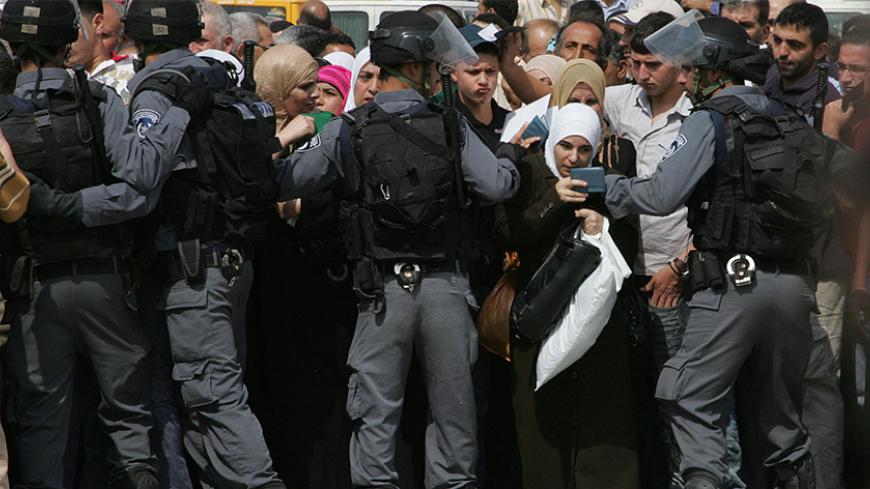 A Palestinian woman holds up her Israeli blue ID card in front of Israeli policemen as Palestinians line up in order to cross from the West Bank city of Ramallah to Jerusalem, Oct. 5, 2007. - GALI TIBBON/AFP/Getty Images

Israel will issue identification cards indicating permanent residency status to 2,000 Palestinians living in Jerusalem and the West Bank who meet certain criteria. The cards will allow Palestinian families to reunite, some for the first time in 13 years.

However, there are complications, many involving the Israeli Nationality Law of 2003, which is still in effect. The law prevents family reunification when one spouse is a resident of an Israeli city and the other is a Palestinian from the West Bank or Jerusalem and can only visit by obtaining temporary Israeli permits.

“The decision to allow the reunification of 2,000 Palestinians living in Israel and Jerusalem is a wonderful yet insufficient step, knowing that the number of Palestinians who have permits to stay in Israel is estimated at 1.46 million people. They are denied the Israeli identity card that allows them to enjoy all of their social and legal rights, namely family reunification," said Jamal Zahalka, an Israeli Knesset member for the joint Arab List and leader of the parliamentary National Democratic Assembly bloc.

Authorities will grant 2,000 blue Israeli identity cards only to those Palestinians living in Jerusalem and the West Bank who have held, since 2003, permits to stay in the Israeli cities and regions of Jaffa, Haifa, Acre, Jerusalem, the Triangle, the Galilee and the Negev.

The current blue identity card is granted by Israel to the people of East Jerusalem alone. Most owners of the blue card are permanent residents of Israel. However, Arab Palestinians living in the country hold, along with the blue card, an Israeli passport and are considered Israeli citizens, but not residents — even though they reside in Israel.

Zahalka told Al-Monitor he is calling on Israel to abolish the Nationality Law. He said the government, "which claims to be democratic," keeps renewing the law, preventing tens of thousands of Palestinian families from leading normal lives.

Israeli Interior Minister Aryeh Deri officially notified the High Court on April 14 of the decision, which was issued in response to a petition submitted by the Israeli Human Rights Center for the Defense of the Individual and a number of lawyers. However, no timeline for implementing the decision has been disclosed.

Palestinian petitioner Najib Zayed, who is a lawyer and a notary public living in Israel, told Al-Monitor, “The decision came following eight years of continuous work and great efforts. We protested against the racist Israeli Nationality Law and [fought for] Palestinians' right to nationality and identity as native residents who are entitled to all the rights and privileges.”

He stressed, “My fellow lawyers, legal experts and I will do our best to have all the families reunited and abolish the racist Nationality Law." Once that is done, his group will work to keep the Israeli government from subsequently reneging on its decision by citing security concerns, he said.

Speaking to Al-Monitor, Omar Shibli, a father of six from Jerusalem, hopes his wife "will be among those who will be allowed to get reunited with their families and granted a blue card instead of a temporary residence permit that is renewed annually.”

He added, “There are a quarter of a million Palestinians who have been waiting for the implementation of this new decision ever since they obtained family reunification permits pursuant to several previous decisions, which Israel [later] revoked under false pretexts."

Ziad Hammouri of Jerusalem, director of the Jerusalem Center for Social and Economic Rights, told Al-Monitor, “The decision submitted by the interior minister Deri may face several objections within the Israeli Knesset" because Israel's policy "consists of limiting and putting an end to the Palestinian presence in Jerusalem and Israel.”

If the proposal is adopted, Hammouri said, its implementation "will face many obstacles, because there are several conditions" people will have to meet. In addition to the 13-year residency requirement, "those seeking to obtain the said identity should also have a stay permit in Israel and a clean record. Therefore, security pretexts may be invoked in a bid to avoid giving anyone the blue card. Add to this that the decision is restricted to humanitarian and difficult cases, whose number is limited" compared with the number of Palestinians seeking to be reunited with their families in Jerusalem and Israel. "These are estimated at about 60,000 people.”