In the case of the IDF soldier who shot a Palestinian assailant on the ground, it was Chief of Staff Gadi Eizenkot who defended categorically the army ethics and values of democracy. 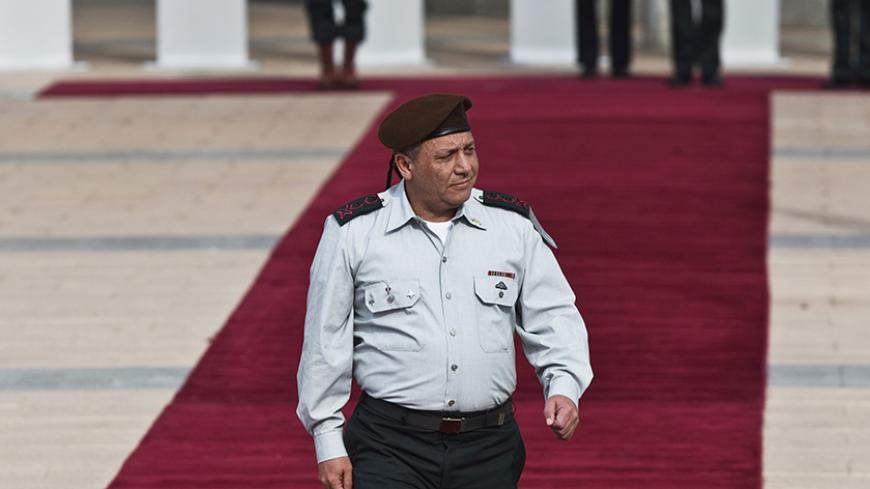 The new Israeli Chief of Staff Lt. Gen. Gadi Eizenkot takes part in a handover ceremony at the Kirya base in Tel Aviv, in which he replaced Lt. Gen. Benny Gantz, Feb. 16, 2015. - REUTERS/Nir Elias

The killing of a Palestinian terrorist by an Israeli soldier in Hebron on March 24 sparked a volatile and emotional debate inside Israel’s political leadership and within public opinion. In the Israeli ethos, the soldier is always in the right and the Israel Defense Forces (IDF) is the people’s army, as military service is mandatory and virtually every Jewish citizen sees or will see his/her children serving in the army. Indeed, a public opinion poll by Israeli TV Channel 2 on March 27 showed a strong majority in favor of the soldier’s claim that he acted out of self-defense; 57% of the public believed that he should not have been arrested.

The response of the IDF was surprisingly stern. The soldier was denounced for not obeying IDF moral code. Chief of Staff Lt. Gen. Gadi Eizenkot issued on March 30 a special letter to all the soldiers, ordering them to uphold both operational and moral standards of the army. He emphasized this point by quoting Israel's first Prime Minister David Ben-Gurion, who said that Israel’s security depends both on its strength and its morality. Eizenkot also committed the IDF to remaining the people’s army in a democratic and Jewish state.

This is a rare case where Israel’s head of the military stood up for Israel’s democratic values.

Eizenkot's stance was strongly denounced and defamed by right-wing politicians and public opinion, but supported by Minister of Defense Moshe Ya’alon. This is quite reminiscent of the Turkish model — especially the stance taken by the Turkish army in 2002 when the Islamic Justice and Development Party first won the elections. At the outset of Turkish President Recep Tayyip Erdogan’s rule, the army stood out to protect the stability of the democracy, out of concern for the religious, Islamic nature of the new regime.

Back to the West Bank. Palestinians were not very impressed with the show of democracy by Israel’s army. Democracy is the last thing that comes to the mind of any Palestinian when thinking of the IDF. A senior Palestinian security source involved in the investigation of the killing of the Palestinian stabber told Al-Monitor on condition of anonymity that the Palestinian Authority describes the incident as a cold-blooded murder. Yet he claimed that there was nothing outstanding in this event and that 200 Palestinians have been killed by Israelis since the beginning of the current wave of violence. About two-thirds of them, according to the official, were executed as they were defenseless.

“We have denounced to the United Nations, the United States and the European Union these executions as Israeli war crimes,” the Palestinian source said. He described in very grim colors the situation in Hebron, saying, “The army gives a green light to the Hebron settlers, the hilltop youth [young extreme-right activists] and the Kahane movement people [followers of extreme right activist Meir Kahane] to attack Palestinian civilians, destroy Palestinian property and businesses and erect roadblocks inside Palestinian neighborhoods.” The official believes that the situation in Hebron is about to explode into much broader violence and that this was the reason in his view that Eizenkot came out against this soldier.

The Palestinian claims did not fall on deaf ears within the international community. Even before the Hebron incident, a group of US Democratic Congress members, led by veteran Sen. Patrick Leahy from Vermont, called on Secretary of State John Kerry in a letter dated Feb. 17 to investigate gross violations of human rights by Israel (and Egypt). The letter mentioned several cases of alleged extrajudicial execution by the IDF and the Israeli Police, and it was leaked to the press after the incident in Hebron. Such a letter is quite exceptional; for Israeli human rights violations to be equated with Egyptian human rights violations is a blatant message.

Israel’s democracy is coming under fire also within the US administration, due to its occupation policies. On April 1, State Department spokeswoman Elizabeth Trudeau expressed concern over Israeli demolition of Palestinian houses in the West Bank and East Jerusalem, which casts doubts as to Israel’s “commitment to that two-state solution.”

Israel’s democracy is in a crisis mostly due to its occupation policies. Its alleged executions of Palestinian terrorists, settlement expansion, demolition of houses and Palestinian land expropriations cast heavy clouds over Israel’s identity as a Jewish democracy. There is a regional and international price to pay for these flaws in the democracy. The Palestinians perceive themselves as the victims of these policies, and most of the international community is critical of the policies as well.

Israel prides itself as being the sole democracy in the Middle East. This is probably still the case. Yet when its government is tacitly criticized by the country’s leading general on the flaws of democracy, it must comprehend that Israel cannot have it both ways. It cannot remain democratic and remain the occupier of another people all at the same time.