Why the Mosul offensive has yet to succeed

Frustrations between the Iraqi army, peshmerga forces and local villagers have presented a major obstacle in the operation that was launched in late March to recapture Mosul from IS. 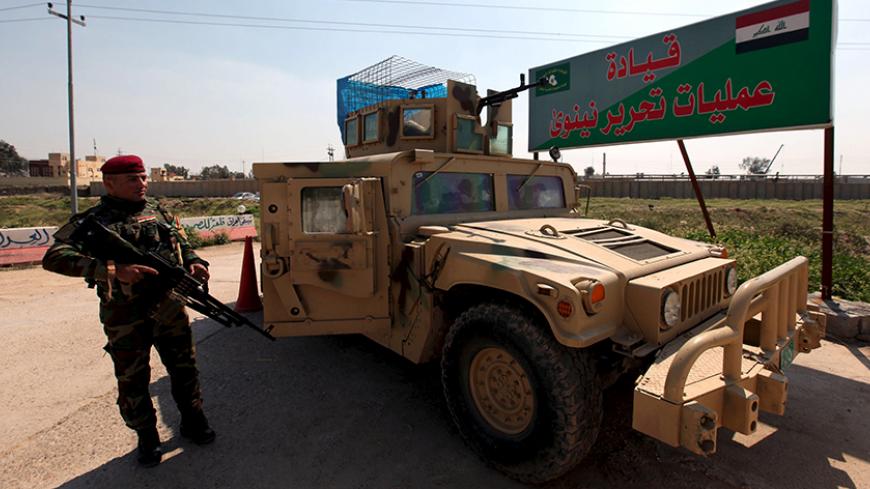 Iraqi army members stand guard at the entrance to the Conquest Operation for the Liberation of Ninevah at Makhmour base, south of Mosul, March 13, 2016. - REUTERS/Azad Lashkari

NINEVAH, Iraq — At times, Kurdish Gen. Ziryan Shekhwasani accompanied Iraqi army Gen. Najim al-Jabouri to survey through binoculars the battlefield on top of al-Nasr village just a couple of kilometers away. At other times, Shekhwasani stood with his peshmerga troops looking with an air of exasperation at how his Iraqi counterparts were conducting the bloody fight against the Islamic State (IS) militants.

The two generals are the point men of their respective forces, Kurdish peshmerga and the Iraqi army, in this southeastern corner of Ninevah province, a vast area of flat plains occasionally interrupted by a hill or cut apart farther ahead by the Tigris River. Cooperation between the two generals and their forces is key in liberating Ninevah and its prized city of Mosul from IS. Yet it was not difficult to see that the relationship between the two sides is uneasy. The peshmerga here do not have an active combat role and provide more of a back-line support, but they are ready to boost up Iraqi forces in case IS attacks or those forces have to retreat. The frontline here is also close to the town of Makhmour, meaning the Kurds have a vested interest in pushing IS away from the area.

“The Iraqi army units here do not seem to be up to the task,” complained Shekhwasani to Al-Monitor, as he pointed to the superior US-made Humvees and other highly armored bomb-resistant military vehicles that the Iraqi units possess much to the peshmergas' disdain. The peshmerga generally have far fewer of those vehicles, and a large number of the peshmerga use unprotected SUVs or pickup trucks on the battlefields.

“If we had their weapons and equipment, we would have taken the countryside of Mosul in three days,” claimed the clean-shaven Shekhwasani as he was surrounded by his peshmerga troops a short distance from the Iraqi forces.

Regardless of whether such claims are credible, they show the frustration of the Kurds with their Iraqi counterparts and a willingness to point out their weaknesses while they are supposed to be partners in pushing IS out of Mosul and the surrounding areas.

When Shekhwasani complained about the Iraqi army's lack of meaningful progress, the Conquest Operation for the Liberation of Ninevah was just in its second day on March 25. Now, more than three weeks later, not only has the army not been able to push the jihadi fighters out of al-Nasr, but they had to cease all operations on April 5 after the militants carried out a heavy counterattack just hours after the Iraqi army took the village. IS militants inflicted heavy casualties on the Iraqi forces, up to 20 dead by some difficult-to-verify accounts, and pushed them out of the village as a result of the counterattack.

Expelling IS from Mosul and the broader Ninevah province has long been considered a milestone in the plans for an eventual defeat of the group. It is the largest city the extremist organization controls in its vast territory spanning western Iraq and eastern and northern Syria.

But weeks after the start of the Ninevah operation, beside the general unreadiness of the Iraqi units in Ninevah, the temporary halt also highlights that a crucial element for the success of such an operation here in Ninevah is strong cooperation between the Iraqi army, Kurdish peshmerga and local Sunni forces. Despite the existing level of cooperation among these forces, there is also a lot of distrust or sometimes just outright disdain.

The Iraqi side has been more cautious in voicing its view about how the relationship has been going. A couple of Iraqi officers that Al-Monitor spoke to during the offensive were content with the level of their relationship with the Kurdish forces.

“We have high level of coordination with the peshmerga,” said one Iraqi army colonel on the condition of anonymity, as he was gazing at al-Nasr village from afar.

But a junior officer said building trust would be a process. “There is, of course, tension and problems, but our commanders work together,” said the officer on the condition of anonymity.

Gathering around a fellow injured Popular Mobilization Units fighter, three Sunni fighters were arguing tensely about the fight on top of the hill.

A fighter on the back of a pickup truck had jumped off his vehicle and hurt his right leg when a rocket-propelled grenade had been fired toward him. He was rushed back behind the dirt berm where the support and command units of the Iraqi and peshmerga forces were gathered.

The fighters were conflicted with regard to the way the offensive was conducted. One said, “Thank God, we have a good relationship with the Iraqi army.”

Another fighter jumped in, interrupting him.

“The Iraqi army needs a lot of help, and if the peshmerga don’t participate in the operations actively, these areas cannot be really taken,” said the older fighter. “Look at what is happening,” he added with disappointment referring to the slow and ineffective pace of the offensive.

The relationship between the Iraqi army and the villagers in the area where the offensive is launched appears to swing between lukewarm to tense. Several displaced villagers who fled to the nearby town of Makhmour were later moved to the Dibaga Camp, as the displaced complained of a hostile attitude by Iraqi soldiers they met.

“When they entered [our village], their treatment was very bad. We heard inappropriate words. They said things we cannot mention,” said Hussein, a pseudonym for a young villager from Kherabardan, one of the three villages Iraqi forces have so far brought under their control. “But not everyone behaved the same way toward us. Some of them were better than others,” he added.

Some residents complained that the advancing Iraqi troops damaged their vehicles. Many members of Iraqi army's Division 15, which has been leading the operations in Ninevah's countryside, are Shiite. Winning the support of local Sunnis here will be an important factor in how the battle will proceed in other areas and how the residents across Ninevah will deal with the Iraqi security forces.

The Iraqi army is facing an uphill battle to take al-Nasr village and the nearby strategic town of al-Qayyara where a former Iraqi army base and airstrip are located. If anything, the track record of the Iraqi forces in the first leg of the Ninevah operation attests to the lack of those troops' readiness to tackle the task on their own and has led to rising criticism. The Iraqi government sent more army units to the Makhmour area to boost up the existing forces and probably prepare for a resumption of the offensive.

“We see with our own eyes large numbers of casualties and failed plans, and [yet] we continue to encourage illusions and fantasy,” wrote Atheel al-Nujaifi, Ninevah's former governor, in a Facebook post.

Nujaifi also commands a force of a few thousand Ninevah residents known as the National Mobilization for the Liberation of Ninevah. His force, in cooperation with the peshmerga and Turkish troops, took two villages north of Mosul on April 18.

Without some adjustment in the way the Iraqi army-led Ninevah offensive is going, the fight to push IS out of Ninevah might be far more arduous than expected.