After Iranian political prisoner Omid Kokabee's kidney was removed due to a cancer diagnosis, Iran’s judiciary is still refusing calls to release him early. 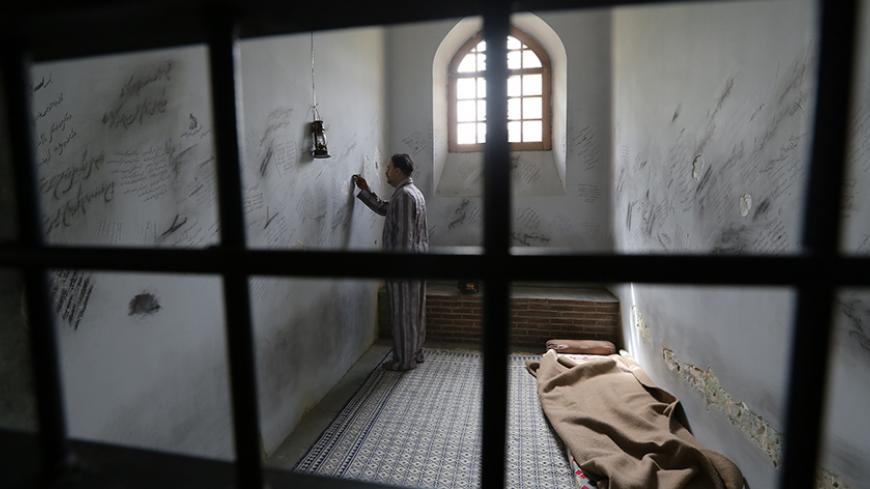 A wax statue of a detainee is displayed in a cell in Qasr Prison, a former prison hosting political prisoners that was turned into a museum in Tehran in 2012, Sept. 2, 2014. - ATTA KENARE/AFP/Getty Images
Arash Karami
@@thekarami
April 25, 2016

Iran’s judiciary spokesman Gholam-Hossein Mohseni-Ejei rejected calls for the release of political prisoner Omid Kokabee from prison after he had his right kidney removed. Kokabee, a graduate student in physics at the University of Texas at Austin who was arrested in Iran, convicted of collaboration with an enemy government and illegal earnings and sentenced to 10 years in prison, was diagnosed with renal cancer after reportedly being denied treatment for a kidney illness for years.

Referring to Kokabee, Mohseni-Ejei said April 24, “This offender has been sentenced to 10 years imprisonment. If someone commits treason against their country they should be punished.” On Kokabee’s illness, he said, “People in prison can become sick like other people, and if they can be treated in prison it will be done. Otherwise they will be transferred to a hospital for treatment.” Mohseni-Ejei said that if a medical doctor says prison will worsen the condition of the prisoner, then it is up to the prison officials to provide another facility.

Kokabee has been in prison since 2011. In an open letter from Evin prison, he wrote that he was imprisoned for refusing to work on military-related research in Iran. Ever since his arrest and sentence there have been numerous calls for his release including from 31 Nobel Prize laureates in physics and the Committee of Concerned Scientists. Kokabee's case made the news again in January 2015, when an appeals court ignored a Supreme Court ruling that could have potentially set him free. Iran's Supreme Court ruled that while Iran and the United States had severed diplomatic relations, they were not in a state of war and therefore the United States was not technically a "hostile" government. After the surgery to remove his kidney, a number of Iranians shared pictures on social media of a bandaged Kokabee in a hospital bed and renewed calls for his release.

In other judiciary-related news, an appellate court has reduced the sentence of Iranian cartoonist Atena Farghadani from 12 years to 18 months, according to her lawyer, Mohammad Moghimi. Farghadani was originally arrested after she drew a cartoon depicting Iranian parliamentarians with animal heads in protest of legislation to restrict access to birth control. Moghimi said that with time served, Farghadani should be released on May 11.

Nazak Afshar is the latest dual citizen to be sentenced to prison in Iran. An Iranian court sentenced the French-Iranian citizen and former employee of the French Embassy to six years in prison for activities related to the 2009 post-election protests. Afshar, who had been living in France, returned to Iran on March 12 to visit her ill mother and was arrested at the airport.

Mohseni-Ejei also discussed the case of a 6-year-old Afghan girl who was raped and killed by her 16-year-old neighbor in April in a Tehran suburb. Mohseni-Ejei assured reporters that the authorities are intently pursuing the case. He added that Iranian officials, institutions and the government have all been in contact with the victim’s family and have expressed their sympathies. When the case first became public, some activists complained of a lack of attention due to the victim being an Afghan refugee.

Mohseni-Ejei warned that those calling for the punishment of the boy today will turn around and decry the human rights situation in Iran once he is punished. Iran has one of the highest execution rates in the world, and the execution of juveniles has been a concern for human rights organizations. According to Amnesty International, there are currently 137 cases of juveniles awaiting execution Iran and 43 juveniles have been executed since 1990.