How one Israeli Arab woman seeks to wipe out hatred

Arab-Israeli activist Ghada Zoabi is trying to restore calm among the Arab population of Israel with a media campaign featuring conciliatory messages from community leaders. 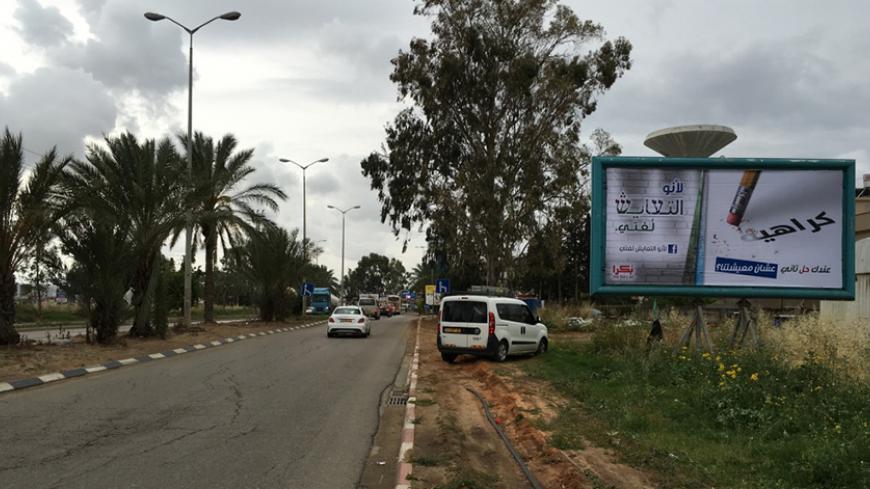 A billboard is shown as part of the campaign by Ghada Zoabi's Bokra website promoting coexistence between Israelis and Palestinians. - Ghada Zoabi's staff

When the current wave of terror, dubbed the individual intifada, broke out last October, Ghada Zoabi sensed that the discourse among Arab-Israelis on social media was turning violent and extreme. Zoabi is the founder and editor of the Arabic-language website Bokra, Arabic for “tomorrow.” With its focus on social issues and a declared agenda of Arab-Jewish living together, Bokra became an immediate target, and every item Zoabi posted about the joint activities of Arab-Jewish youth groups was attacked. As the cycle of violence intensified, the atmosphere on the Internet escalated, and Zoabi, a restless social activist, sought ways to soothe the violent public climate.

Zoabi, a former journalist, approached her mission by commissioning an in-depth survey, conducted in recent weeks, to examine attitudes and trends in Arab society. Although the findings hardly surprised her, they were unusual in their intensity. The impression that emerged was one of a frightened society, 85% of which fears an increase in racism among Jews, 78% admitted that they are concerned about going to shopping centers in Jewish towns lest they be harmed and 56% expressed pessimism about the possibility of co-existence.

Zoabi's survey served as the basis for a widespread public campaign called “Wiping Out Hatred,” spearheaded by Bokra together with the Talking Coexistence group.

Billboards went up at the entrances to major Arab towns and villages, and social media is awash with video clips promoting coexistence, some of them featuring Jewish, Muslim and Christian religious leaders. The target audience is young people, and the idea is to counter the hatred-inciting videos on the web that served as a primary motivator for young Arab-Israelis to carry out terror attacks. After the incitement to hatred and violence that filled the social networks in recent months, Zoabi was unsurprised when one of the billboards in an Arab city was torched.

A significant part of the campaign is being conducted on the Facebook page of Talking Coexistence. The video clips posted there feature young Jews and Arabs talking about joint social initiatives as well as religious figures addressing conciliatory words to the young.

It was clear to Zoabi that any effort to address this issue must be based on empirical findings. She also realized that such a campaign should not be political in nature and must not involve politicians. This perspective stems from the political capital made by both Jewish and Arab politicians from the violence of recent months, using it for electoral purposes and constantly setting new fires with Knesset debates or site visits instead of trying to restore calm.

“Some politicians have called to offer encouragement, but I did not want active support because this is a social initiative, not a political platform,” Zoabi told Al-Monitor. “I hope this campaign also impacts the politicians and makes them think twice before making incendiary comments.”

Zoabi said she made a concerted effort to enlist clerics to her campaign, including the chief rabbi of the mixed Jewish and Arab town of Acre, Yosef Yashar, who stars in one of the clips, as well as municipal leaders, assuming that these personalities would be able to connect with the feelings of the young and dampen the flames.

“It was clear to me that the first thing that has to be done is to restore calm,” says Zoabi. “I met with clerics and mayors. I asked them to help me. I told them that they had to take responsibility for easing tensions and opening up a dialogue. I explained that it’s important for our young people. Because the campaign is largely directed at young people, we are strong on social media. They are constantly exposed to content from the Arab world, and you can’t control that. They’re exposed to [extreme] ideas, and we see cases of young women going out to stab soldiers. That’s why it was important for me to fight on the same front, meaning to be active on the web. So we produced the videos. The slogan of the campaign is that we have no alternative and that you and I find ourselves in a complex reality and must try, together, to turn frustration into dialogue.”

Zoabi explained that even before receiving the findings of the survey, she knew that the situation was very difficult. "We on the website are closely linked to the goings-on in Arab society and the minute the terror wave began, we started hearing a lot of stories about Arabs who were attacked at the workplace by Jews in a reflection of the climate of incitement. Unfortunately, the Jewish media does not cover what happens in our lives.”

“The finding that 56% said they had lost hope was also hard for me, because that means that people believe less and less in the possibility of living together. As a social activist on these issues, I cannot sit idly by. I am committed to living together, and even without seeing the poll, I felt that even my friends who believe in coexistence are distancing themselves from it.”

The campaign generated all sorts of strong feelings, Zoabi said. “We got harsh reactions and we were expecting that. There were threats, too. There were also those who claimed that the Bokra website is owned by the Mossad. In our responses we tried to explain that the goal is not to appear self-righteous to the Jews, but to tell ourselves that violence will not solve our problem. All of this, of course, does not deter us because it’s obvious that if we don’t do something, we will lose control over our young people.”

by Haitham EL-TABEI with AFP correspondents in the Middle East | AFP | May 17, 2022
END_OF_DOCUMENT_TOKEN_TO_BE_REPLACED