Former Ambassador Gideon Meir argues that Israel has engaged itself in a high-profile battle against the boycott, divestment and sanctions movement, turning it from an insignificant organization into a powerful force. 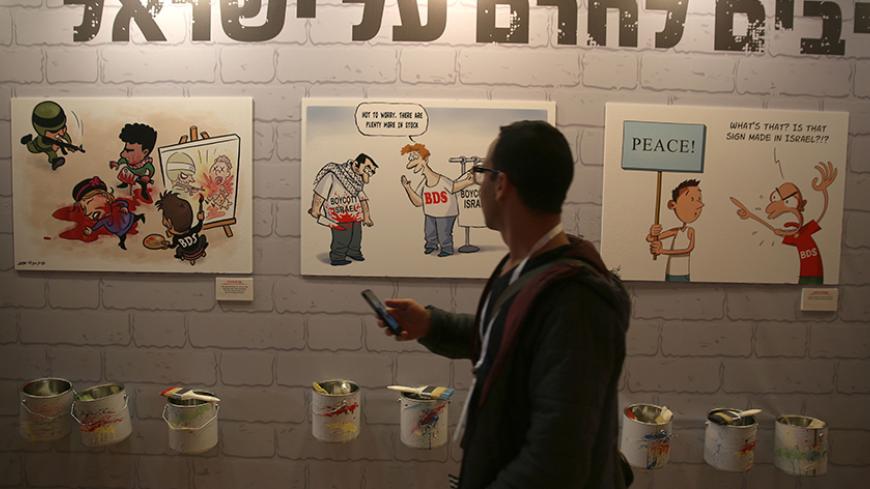 A man looks at caricatures of Israeli artists against the Palestinian-led boycott, divestment and sanctions movement displayed during the Ynet and Yedioth Ahronoth's anti-BDS conference in Jerusalem, March 28, 2016. - MENAHEM KAHANA/AFP/Getty Images

In recent years, the anti-Israel boycott, divestment and sanctions (BDS) movement has morphed into a new demon that threatens the Jewish state. Once a toothless, marginal group, BDS — which acts to boycott and ostracize Israel — has become one of the most substantial threats to the future of the state. In an attempt to fight the phenomenon, the Yedioth Ahronoth newspaper held an international conference in Jerusalem March 28. Prime Minister Benjamin Netanyahu devotes space to it in his speeches and activities and the government has appointed a special minister (Home Security, Strategic Affairs and Public Diplomacy Minister Gilad Erdan) to focus on fighting BDS and even allocated about 100 million Israeli shekels ($25 million) for this effort.

Any self-respecting Israeli politician will lecture, write, speak or participate in rallies and gatherings against the BDS threat. Israeli politicians vie to make the most combative statements against BDS. This competition reached an absurd height on the morning when anti-Israel posters appeared in several stations of the London Underground in February. Almost immediately, a ridiculous race began between Netanyahu and Yesh Atid Chairman Yair Lapid to be the first to get those posters removed. Lapid reported that he contacted London’s mayor and insisting that they be taken down. (Later, it turned out that he had only sent a text message.) Meanwhile, Netanyahu instructed the Foreign Ministry’s Director-General Dore Gold to take action and demand that the posters come down.

In fact, the posters would have been removed that morning anyway, as they had been affixed to the walls illegally. The Israeli Embassy has also taken quiet action before the politicians got involved.

Gideon Meir, former deputy director-general for media and public affairs in the Israeli Foreign Ministry, is one of the country’s best-known diplomats and held in high esteem. Meir served as the ambassador to Italy, head of the Foreign Ministry's public affairs directorate and as deputy director general of the ministry. Only recently did he end a decades-long career of service for the state.

“We are the main ones to blame for the fact that the phenomenon has blown up to such proportions,” Meir told Al-Monitor. “Israel was the one who inflated the BDS movement and gave a tremendous tailwind to a toothless, marginal group lacking international clout. Israel’s treatment of the phenomenon is erroneous from its very foundation, and only serves to strengthen BDS. First and foremost, the blame falls on the Israeli politicians. One has to fight such a phenomenon quietly and judiciously. 'For by wise counsel thou shalt make thy war.' We have to promote legislation in the world’s important parliaments to curb the movement. We have to operate under the radar to recruit leaders. Each time we address BDS publicly, the movement’s leaders give each other a high five. Each time an Israeli politician visits a campus and is greeted by a hail of rotten tomatoes and curses, he gets headlines in Israel, and that’s what he cares about most. But that spells victory for BDS. That’s exactly what they live for.

“A handful of thugs hang up posters in the London Tube, and within a few hours all of Israel’s leaders are talking about them. Just imagine what a success this is for them, how many donations they receive, recognition and new audiences they recruit in the world by virtue of a few posters. We should not be running from one event to another, and allow [the BDS demonstrators to disrupt the appearances of Israeli politicians on campuses]. Instead what we have to do is bring students who are public opinion leaders to Israel: as many as possible from the most important campuses around the world, and every single year. Bloggers, social justice leaders — we have to start to bring them here, and lots of them. We have to create Birthright Israel programs for non-Jews. That is the way to change public opinion. These students should visit the Palestinian Authority as well, so they understand the complexity of the situation.”

Meir had submitted a program for bringing 3,000 non-Jewish students from Europe and the United States to Israel every year, at a cost of about $12 million. The program was not approved.

Meir said, “There are tens of millions of Hispanics in the United States. They don’t know anything about Israel. We have to bring loads of their representatives here. We have to fight over the next generation in America. Instead of that, we are operating in the United Nations, when it is UN countries that are promoting BDS! Why waste our energies there? [Investing in the UN] means that with our own hands we give this movement a public relations service that is worth billions, free of charge.”

Since early April, Al-Monitor has spoken with another four Israeli diplomats, two currently serving abroad and two in Jerusalem’s Foreign Ministry. They agreed with everything Meir said, and even included their own comments in the same vein on condition of anonymity.

“The government has now allocated close to 130 million shekels [$34 million] to the Ministry of Strategic Affairs to fight BDS,” one of the senior diplomatic sources told Al-Monitor. “That is an outrageous waste of money. BDS must be fought abroad — on campuses and European capitals, quietly and professionally. The Ministry of Strategic Affairs does not have the tools. The Foreign Ministry has 106 diplomatic missions, and manpower. So they are crushing the Foreign Ministry and establishing a new ministry — a crippled ministry that cannot provide a real solution.”

Another senior diplomat said, “The BDS movement reflects a tremendous failure of Israeli policy. It was a marginal phenomenon that for a decade tried to boycott and ostracize Israel, failing miserably. Israel’s economic indicators were virtually unaffected. The situation on the campuses [abroad] remained as before, with ups and downs. Opposite them was a self-confident state with a cohesive agenda and Jewish organizations that continued their regular activities.

“But then something happened,” the diplomat added. “It began in 2011, and accelerated in the last three years. Jewish organizations need crisis situations that enable them to more easily raise funds. Suddenly this [BDS issue] appeared, like a lifesaver. Everyone grabbed it. This has potential for great selling power. Add to the pot the 'gevalt syndrome' [a cry for rescue in Yiddish] with the hysterical media, and suddenly you’ll get fringe groups that became the biggest existential threat to a whole state. Israel — an economic, military and regional power — allows all kinds of fringe groups to dictate its agenda.”

“And in addition,” Meir said, “we have to add to the pot what is happening to us in America. We are losing a large part of the Jewish community. In America, the conservatives are weakening and the liberals are strengthening. The 'official' Israel and most of the Jewish organizations talk to young Jews in America using right-wing, conservative language that is unacceptable to them. Wise diplomacy can and should deliver messages in the liberal language too. Meanwhile, Noam Chomsky is the one who celebrates. A decade ago he was in the margins. Now he is in the heart of the consensus and Israel is shoved to the margins — with her own hands.”