Why Palestinians prefer Clinton over Trump

As Trump and Clinton move closer to winning their parties' nominations, Palestinians seem to favor Clinton, although they don't have high hopes that any president would resolve their conflict with Israel. 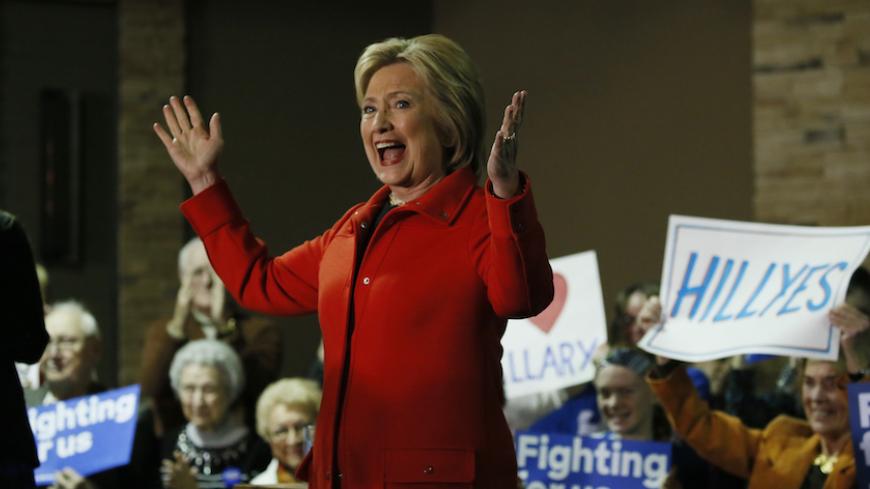 The Palestinian cause and ties with Israel have come up for both candidates in their campaigns. In a statement Feb. 21, Clinton said, “I … believe the Palestinians deserve to have a state of their own.” She reaffirmed her endorsement of a two-state solution and said that she supports Israel.

Trump said Feb. 17 that a peace agreement in the Israeli-Palestinian conflict is “probably the toughest agreement of any kind,” adding, “But I will give it one hell of a shot” if elected.

Husam Zomlot, the Ramallah-based executive deputy commissioner for Fatah's Commission for International Affairs, told Al-Monitor, “As Palestinians in general, we are not concerned with the US electoral campaigns. Our history with both Democratic and Republican administrations is long, and many previous presidents failed to fulfill the aspirations of the Palestinian people, namely the establishment of a state and liberation from occupation. What concerns us is the political approach that the next president will adopt, irrespective of whether it will be Clinton or Trump. Much of what we hear these days is designed to gain the sympathy of US public opinion and attract votes and funding, which mostly emanates from Jewish parties.”

Palestinians may have reservations about expressing a preference in the US presidential race for fear that the other candidate might win. Yet they do sometimes seem more inclined to support Clinton and have expressed great apprehension regarding a Trump victory. Clinton is associated with a relatively positive legacy in their regard, whether due to her husband, former President Bill Clinton — during whose reign negotiations almost led to positive results in favor of the Palestinians — or to her service as secretary of state. Trump is viewed by Palestinians as a tougher version of George W. Bush, during whose term Israel besieged the late President Yasser Arafat in Ramallah, while the US administration did not pressure Israel to lift the siege.

Bassem Naim, Hamas' foreign relations head and former health minister, told Al-Monitor, “The Palestinian cause is no longer a priority for US candidates, who do not base their actions on equitably ending and resolving the Palestinian-Israeli conflict. The US policy is now equating legitimate Palestinian resistance with terrorism. I am not optimistic that the new US president would deal with the Palestinian cause as a priority. Other more pressing issues loom large in Syria, Iraq and Iran. Choosing between Clinton and Trump is a difficult task, but the latter espouses an extremist discourse and expresses ideas with racial overtones, while Clinton does not hide her bias in favor of Israel.”

Palestinians are well aware that President Barack Obama has been more understanding of their cause than any other serving US president. He has called for negotiations between Palestinians and Israelis and has often denounced the Israeli settlement activities in the occupied territories, which Israel saw as opposition to its positions. Yet he ultimately realized that he is unable to achieve his political objectives and convictions regarding the Arab-Israeli conflict due to Israel’s inordinate influence on US decision-making circles.

Raed Enairat, chairman of the political science department at An-Najah National University and head of the Contemporary Center for Studies and Policy Analysis in the West Bank, told Al-Monitor, “Trump espouses an anti-Palestinian rhetoric. Yet this does not mean that Clinton will be good for them, but that she is less hostile. Palestinians view her as a candidate with great political experience and a balanced political discourse due to her previous role as secretary of state, and they expect her to make efforts to resolve the conflict with Israelis.”

Some Palestinians, especially those involved in the negotiations, believe that there are red lines that no US president is able to cross regarding the Israeli-Palestinian conflict, most notably Israel’s security. Nevertheless, in clear opposition to the negative Israeli stance toward Palestinian President Mahmoud Abbas, Clinton warned on Dec. 6, “The alternative to Abbas could be the black flag of the Islamic State.”

Ghazi Hamad, undersecretary of the Ministry of Foreign Affairs in Gaza, told Al-Monitor, “The Palestinian cause is absent from the platforms of US presidential candidates and took a backseat to their focus on issues relating to trade with China and the Iranian nuclear dossier. This is in the interest of Palestinians, keeping in mind that all former US presidents couldn't find a solution to the Palestinian cause.”

Irrespective of whether the next US president will be a Democrat or Republican, the Palestinians’ problem is perhaps that the president will be dealing with the most right-wing Israeli government ever, which seems to have successfully imposed upon Obama and Bush its view regarding the conflict with the Palestinians. This view is represented by Israel not recognizing a Palestinian state on the 1967 borders and not freezing settlement activities in the West Bank and Jerusalem.

Thus, Palestinians do not expect the future president to be able to impose upon the Israeli government his or her vision of the conflict. Israel has retained effective tools to place pressure on Washington, particularly through the American Israeli Public Affairs Committee and its allies in Congress.

Osama Abu Irshaid, a Palestinian researcher at the Arab Center for Research and Policy Studies in Doha, spoke to Al-Monitor over the phone from the United States. Rashi, who resides in Virginia, said, “US candidates are jockeying to express support for Israel, which they clearly favor, despite the slight differences in opinion between them. Clinton’s policies constitute an extension of those of Obama, as far as endorsing the two-state solution; she will be cautious in dealing with the Palestinian issue. Meanwhile, it is hard to anticipate the political stances of Trump, who seems completely biased in favor of Israel, as what he might come up with could surprise all parties involved.”

Palestinians are not pinning great hopes on any US candidates' resolving the conflict with Israel. They are aware that the majority of the current candidates are not impartial in that regard. Moreover, as long as there are Israeli efforts to steer clear of implementing the two-state solution, the new US president may fail to impose such a solution, although most Palestinians who spoke to Al-Monitor favor Clinton.