US must encourage Israeli voters to seek end to conflict

While Israeli voters prepare for elections, US President Barack Obama should not echo former Secretary of State Hillary Clinton's unconditional support for Israel: He should instead show voters the price of their leaders' refusal to negotiate with the Palestinians. 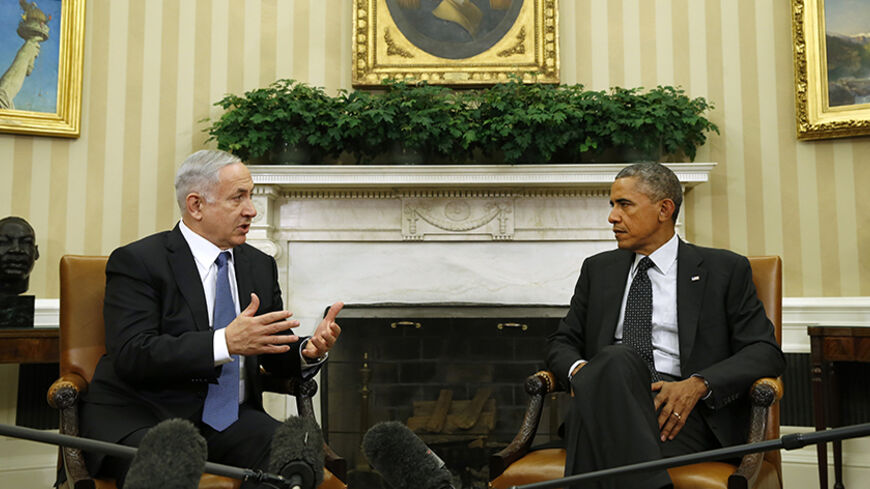 Hillary Clinton, former US secretary of state and potential candidate for the 2016 US presidential race, addressed the Saban Forum in Washington Dec. 5. She said, “The US government will continue its support of Israel regardless of which party wins the elections.” She later said in her speech, "The two-state solution remains an important and essential concept.” Several questions arise from Clinton's words: Does the United States need to continue to support Israel even when the regime in Jerusalem is ”owned” by a government that does not miss an opportunity to throw a wrench into the works of the two-state solution concept? Can providing aid to a government that sabotages US interests in the Middle East and operates according to a viewpoint that — according to the United States – harms its own vital interests be considered a “friendly act” toward Israel? And can effective foreign policy be pursued without the use of “carrots and sticks” — namely reward and punishment?

The answer to these questions is not to be found in the Israeli-Arab conflict arena, or even in the Washington-Jerusalem conduit. The answer lies in internal US politics. This is not the first time that Clinton has set her sights on the American-Jewish votes and purse strings. When we compare the demonstrations of empathy on the part of the first lady in the White House toward the Palestinians versus the pro-Israeli approach she adopted as candidate for US senator for New York (the most Jewish state in the United States), it is hard to believe that we are talking about the same person. If we ostensibly would want to speak in her defense, we would say that she operates according to the rules of the US democracy game.

George H.W. Bush, the last American politician who dared connect the dots between assistance to Israel and the stance of the Israeli government vis-a-vis the Palestinian problem, was forced to make do with only one presidential term. Bush suffered a surprising defeat in the 1992 elections to the young politician Bill Clinton from Arkansas. Quite a number of American commentators attributed Bush’s defeat to the fact that he stipulated economic aid to Israel — a $10 billion loan guarantee earmarked for absorption of a massive wave of immigrants from the former Soviet Union — on a freeze in the settlement enterprise. One could say that after Hillary Clinton was witness to the dire consequences meted out to her husband’s political rival back then, she herself took pains to avoid even the smallest mistake. Despite Israeli Prime Minister Benjamin Netanyahu’s destroying the two-state concept as diligently as he builds settlements, Clinton will not say a bad word about him lest she ruffle the feathers of Jewish political activists and contributors. After all, public criticism of an Israeli government in the midst of an election campaign is likely to be viewed as interfering in Israeli internal affairs.

When Bush demanded in 1992 that Israel freeze construction in the settlements, the Likud Party argued that this constituted interference in the Israeli election campaign. On the other hand, the provision of economic aid despite the Yitzhak Shamir government’s refusal to freeze construction would have constituted at least as much interference in the election campaign by the same token. It would have allowed the Likud to claim that it was able to deepen the occupation while simultaneously pretending to conduct peace negotiations and earn brownie points from the United States at the very same time for its refusal policy. What reason would the Israeli voter have to replace such a “successful” government? Indeed, the use of “aid sanctions” convinced tens of thousands of Israeli floating voters that the Likud not only damaged relations with the United States, but also harmed their own economic security. The Labor Party toppled the Likud from the government, advanced the diplomatic process with the Palestinians and rehabilitated relations with the United States.

The US incentive proved itself during the crisis surrounding the disengagement agreements in the mid-1970s following the Yom Kippur War. If not for the threat of a “re-evaluation” of the special relationship with the United States, it is doubtful that the Israeli government would have signed the separation of forces agreements with Egypt and Syria.

Some of President Barack Obama’s advisers came to the conclusion that the time had come to remind the Israelis who is the boss. They encouraged the president to set a detailed outline for a permanent agreement between Israel and the Palestinians. They recommend that the process involve a fixed timetable for the establishment of a Palestinian state on the basis of the 1967 lines and the Arab Peace Initiative. According to the plan, a diet of “carrots” would be provided to the party that adopts the outline, and “sticks” would be the fate of the recalcitrant side. When the Israeli voter goes to the polling booth, he or she would know whether they vote for the carrot or the stick. The Palestinian leadership and public will also clearly envisage the end of the occupation, with the advantages that follow the end of it, vis-a-vis perpetuation of the conflict and the drawbacks involved.

The crisis in the relations between George H.W. Bush and late Prime Minister Shamir contributed to the Likud’s downfall. The rift between Netanyahu and Bill Clinton helped former Prime Minister Ehud Barak bring the Labor Party back to power. Obama, by contrast, has only a marginal influence on the Israeli public — if any. Some of the Israelis view him as a weak president who is completely at a loss with regard to the Middle East. There are also those who believe that Obama is an Israeli-enemy Muslim. Thus, to halt the right-wing drift of the Israeli public, Obama must expand his wingspan. He must resurrect the Quartet, which includes the European Union, Russia and the United Nations, and most of all he must recruit German support. Even a propaganda whiz such as Netanyahu would have a hard time convincing the Israeli public that German Chancellor Angela Merkel, Israel’s greatest advocate, would collaborate with Israel’s enemies.

Obama, like Hillary Clinton, believes that the two-state solution is the only way to ensure Israel’s future as a Jewish and democratic state, and to realize the US interest of ending the conflict. Obama, unlike Clinton, is not worried that a potential confrontation with Israel’s right-wing government will adversely affect American voters. He can allow himself to incentivize Israeli voters to support parties that offer an alternative to the current government.